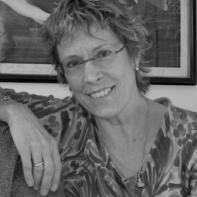 Chase Twichell is the author of seven books of poetry, most recently Horses Where the Answers Should Have Been: New and Selected Poems (Copper Canyon, 2010) which won the Kingsley Tufts Poetry Award from Claremont Graduate University, and the Balcones Poetry Prize. She is a student in the Mountains and Rivers Order at Zen Mountain Monastery, and splits the year between Miami and the Adirondack Mountains of upstate New York.

Superstition Review Editor Christina Arregoces conducted this email interview with Chase Twichell. She says of the experience, "as soon as I sampled Chase Twichell's poetic style I was drawn in. Ms. Twichell's poems are full of what I can only describe as the stark beauty of language. I was honored when Ms. Twichell agreed to conduct this interview, and her responses to my questions were not only beautifully and honestly written, but so descriptive and explanatory that I found myself rereading some of my favorites several times. I would like to thank Ms. Twichell for her time, her inspirational answers, and the opportunity she gave me to learn even more about writing."

Superstition Review: Where do you find inspiration for your poetry?

Chase Twichell: Everywhere! I don't think that inspiration arrives out of the blue, though it often feels that way because it can seem unfamiliar, as when a sudden insight seems to come from somewhere outside of the poet's mind. In fact, it's the poet's mind, which is constantly scanning the world for things it can use, that's the real source. When a person is deeply engaged in the work of poetry, which is to say the study of what it means to be human, to have consciousness, they naturally become aware that nearly everything is capable of carrying meaning, if you can just get the language right.

SR: In your poem “Road Tar,” you beautifully depict three different scenes: a kid chewing road tar, a squirrel being crushed on the road, and a school film called Reproduction. How did you come to link these three scenes together?

CT: “Road Tar” is a lyric poem. The lyric is like an atom: it has a center of gravity that holds its disparate parts in a sort of associational force field. It's a small room, but one that allows for all manner of visitors. I had been thinking about grade school, which is still very vivid in my mind. The film “Reproduction” is a made-up detail, though I did learn about the birds and the bees at about the same time. The squirrel incident actually happened, though. I remember seeing the car hit it, and stopping my bike, paralyzed. I wanted very badly to help the animal, but was both afraid of touching it (what if it bit me? I might get rabies!) and unsure of how to put it out of its misery. At just that moment, a man came by, also on a bicycle, and killed it by stomping on its head. The experience has stuck with me all these years. So, being a poet, I asked myself why I remember that particular violence with such clarity? I'd gone hunting with my father, and killed many birds by wringing their necks after they were shot (which now strikes me as a horrible thing to inflict on a child, but that's the world I lived in). The glue that holds the various elements together is association, which I hope the poem makes overt. The road tar suggests naiveté (what a mean boy to tell me it could be chewed!) and a kind of kid-adventurousness. The girl in the poem is figuring things out. She has (book) knowledge of sex, yet is still gullible enough to put hot tar in her mouth. And while she is musing on these things, she sees the squirrel's death, which is disturbing, and therefore in the same basket as road tar and reproduction, to greater or lesser degrees. The poem's center of gravity is that unparaphrasable mix of curiosity, ignorance, and fear.

SR: How important to you is the act of titling your poems? Describe your process for titling.

CT: The title of a poem is like a sign on a closed door, and is crucial. It should make the reader want to open the door. Not all titles can be fascinating invitations, of course. Sometimes a title is simply the poem's name. It's unusual for me to finish a poem without knowing its title. In fact, I don't think it's ever happened! The title is either one of the sparks that starts the poem, or is something I discover in the writing of it.

CT: That poem ended up very, very far from its origins. There's no story behind it. Rather, it came out of my trying to understand a person very close to me, who is a drug addict. I wanted to go as far back as I could imagine her life in order to better understand her dangerous compulsion. What I found was that there was a still-unharmed girl who survived inside her. Writing the poem gave me access to a tenderness that was a counterpoint to my frustration and anger. It made me more compassionate toward her ruined innocence.

SR: In your poem titled “Stirred Up By Rain,” you rely heavily on first person and detailed description up until the very last line: “Believing is different than understanding.” What made you shift styles and include that line?

CT: Good question. In hindsight, I think that line was a mistake, which is why I didn't include the poem in my Selected Poems. Sometimes a poem begins with something you later have to get rid of. Just because it's the door through which the poem came doesn't mean it's necessary to the poem in its final incarnation. I'm a student of Zen Buddhism. In that poem, I was struggling to come to terms with the difference between believing and experiencing. I believed what I was studying: that there is no self, that form and emptiness are one and the same, but my experience of it was purely intellectual. I understood it (which is why the word 'understanding' is wrong) but I had never actually perceived it directly, experienced it. If I were to write that poem now, I'd cut the last line and let the imagery speak for itself.

CT: I've always been fascinated by the intimacy that a reader can feel with a writer. Keats comes to mind. His poems have the effect of having just this minute been written, as if the ink were not yet dry. You can almost feel the emotion still in the air. It's because he's soft-spoken and confiding—he's talking to you. Whitman does it too, as when he says, “If you want me, look for me under your boot soles.” Spooky line! I wanted to explore the possibilities of speaking directly to the reader, a head-on direct address. Every poem has an imaginary audience, whether the poet knows it or not. It's useful to ask who that is. The direct address allowed me to imagine the reader in a more intimate way than usual.

SR: In your poem entitled “To the Reader: Polaroids,” you use a lot of imagery that seems to come from nature, such as the “austere little cloud,” the “few dried petals,” and “a twig on the lilac.” What is the role of nature in your poems?

CT: I grew up in the last significant wilderness east of the Rockies: the Adirondack Mountains of upstate New York, six and a half million acres that's largely undeveloped. If you look at a map, the Adirondack Park looks like a bald spot, there are so few roads. Growing up there was a mixed blessing. On the one hand, I practically lived in the woods, identified with animals far more than with humans, and was therefore marked from earliest childhood with a passionate love of all things wild. On the other hand, I have had to watch, during my lifetime, the destruction and despoiling of what I most love. Half of our lakes are now dead from acid rain (from the midwestern coal-fired plants). There are heavy metals in our soil, plants, and so forth right up the food chain. Whole ecosystems have been destroyed. So I live in a state of mixed joy and grief. Looking out my window as I write this, I see the smoldering, smoky October beauty of the mountains behind trees almost bare of leaves. It takes my breath away. And then, as if overlaid, I see the red spruce, a little too rusty in color, because they're dying of blight. I can't see one without seeing the other. To me, this speaks of the whole world: alive and dying at once.

SR: How often do you write poetry and what is your process?

CT: 24/7. I'm not kidding. Even when I'm sleeping, I'm working. After many years of writing poems, I think the mind becomes a sort of scanning machine, always looking for whatever it can use. Use for what? As a crowbar to pry open the mysteries. As a telescope, a microscope, a knife, a wind, whatever it takes to travel beneath the familiar veneers of things. I always carry a small notebook and a pen. In the car I have a tiny tape recorder so I can keep my eyes on the road. The house is filled with notes on napkins, the phone bill, even the back of my hand if no paper is nearby. But I think you mean how often do I sit down at my desk and try to make something of these fragments. The answer is that I let things simmer in my head until I sense that they're ready to come into being as poems. Once I have a workable first draft, I fuss over it for days. I'm very slow, finishing less than 20 pages a year on average.

SR: Which authors do you go to for inspiration? Which new writers impress you?

CT: I try not to talk about new writers in print, because there are so many wonderful ones, and I always forget someone I should have mentioned. As for the sources of inspiration for my own work, I've been reading almost nothing but older Chinese and Japanese poems for several years. I'm stunned by their utter clarity, simplicity, depth, and timelessness. Such poets as (in no particular order) Han Shan, Tu Fu, Basho, Issa, Su Tung-P'o, Li Po, Wang Wei, Buson, Ryokan seem to me immortal.

SR: The language you use in your poem entitled “To the Reader: If You Asked Me” is gorgeous and memorable. What inspires you to create such beautiful metaphors?

CT: Well, a metaphor is essentially a leap of mind that finds likeness in two things that are essentially unlike, as when Derek Walcott describes a church steeple as a swordfish coming straight up out of the water. Metaphor-making lies at the heart of poetry, because it forces the imagination to leave behind what's literal, and look instead at what can't be exactly paraphrased. Many people think that poetry is “difficult,” but good poetry isn't difficult at all because it teaches you how to read it. I believe that any curious, intelligent person can enter a poem and “get” it without any special training. I'm talking about good poems, mind you. I'm not interested in poems that make me feel stupid, or uneducated, or excluded, or confused. I don't have time for those! I believe that we're all born with an innate receptivity to poetry, but that our very left-brained culture discourages it. Yet it survives, and flourishes, and is, to my mind, absolutely crucial to our own survival and well-being because it speaks to a part of human consciousness we cannot do without: the part that demands the whole unfiltered truth of what it means to be alive.