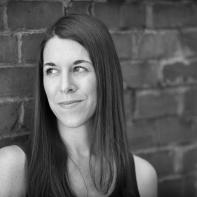 Catherine Pierce's most recent book of poems is The Tornado Is the World (Saturnalia 2016). She is also the author of The Girls of Peculiar (Saturnalia 2012) and Famous Last Words (Saturnalia 2008). Her poems have appeared in The Best American Poetry, Boston Review, Ploughshares, The Southern Review, FIELD, and elsewhere. She co-directs the creative writing program at Mississippi State University.

I was twenty and wandering the country
like I wandered my mind. The sweat-and-cigarette
packed metro, the stains on the hostel pillow,

even the knife-eyed men calling across alley
came through in soft focus. I filed them away, all under S

for Story. I was in Italy once, and I was sick,
as sick as I've ever been. My throat swelled
and my chest filled with pebbles. My heart clattered

like a roughshod horse if I walked up a flight
of steps. But I ate cheese and bread heartily,

thinking, like Heidi, it would make me strong.
It didn't, but days went by and I forgot, slowly,
the frantic thumping. I was in Italy once and I drank

cooking sherry from a jug. Someone laughed, and I
filed that away, too. I was in Italy once, on a payphone

on a dock on an island. A man approached, and I spoke
the language brokenly, said “phone” and “United
States” and he nodded and stepped back. It was,

inexplicably, my proudest moment. I was in Italy
once and I watched a curtain of pigeons lift

over St. Mark's Square. I thought, I am watching this.
I thought, what a good word: curtain. Later,
I ate tiramisu on the canal and was aware

of doing so. I was always aware of doing so.
In Venice I thought the clouds were mountains

in the distance, and made a note of my foolishness.
Later, I realized they were. I was in Italy once
and thought I could tell my own story.