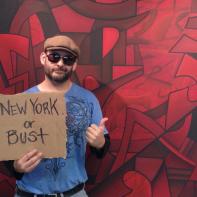 Hammond grew up in New York's neighboring towns and villages along the historic Hudson River Valley. He received his B.A. in Art from Arizona State University in 2006. In 2011, Hammond’s art made a drastic change from previous works when he launched his Untitled series. Throwing out his conventional academic training and working from the subconscious and an emotionally charged base, his work shifted to an abstract expressionistic style. Opening his new studio in 2012 at the Pendleton Art Center in Cincinnati, OH, Hammond has continued exhibiting in Ohio and Colorado and has works in private collections nationwide.