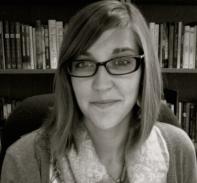 Casey Patrick's poems and interviews have recently appeared in Fourteen Hills, Willow Springs, and Compose: A Journal of Simply Good Writing. She teaches with The Loft Literary Center and works as a bookseller. She is the 2014–2015 Hub City writer-in-residence.

I.
It is the next July.
We have left the city to its dirty river,
its hard glass angles. We are both chopping eggplant
to fry in our separate kitchens: I have trouble
keeping mine still: I’ve tacked its purple skin to the wall.
Through the phone, I can hear oil snapping.

II.
It is the first July.
I’m in a city across the ocean
pretending I know anything about you.
It is hot on the subway, hotter
in my bedroom. We’ve only imagined each other
naked. Your hair’s in dreadlocks: mine’s in braids
most days: I’ve touched every inch.

III.
It is the winter between. Sitting under blankets,
we eat baked potatoes and smoke. You won’t
turn the heat on: I’m shaking: I’ll trace lines
on your frosted windows and look through them to the night.
You’ll play your guitar. I’ll sleep in your bed,
wake sweating: I won’t be able to find you.

IV.
It is August and you have not touched me
anywhere. We’re not in the city yet. We haven’t loved it
for its lake-blue eyes, its steady skyline.
I haven’t hated its crowds: we haven’t sweated out our fevers,
haven’t taken our temperatures.
The heat is in our mouths: we welcome it.

I’ve stopped trying to figure the weather, accepted I’ll be wearing shorts
when the temperature pulls the rug out from the day’s feet
and the one time I don’t bring an umbrella—that old story.
It has something to do with why we’re all so cold today.
It’s been years since my parents loved each other. This morning,
my neighbor shattered a dish: it sounded like a disaster would sound
if you pressed your ear to the speakers of your TV. It’s all relative—
that’s a thing people say. Something about distance, about rain
and how fast our tans fade in the fall. Something in the way
my parents never touch each other, not before long trips
or at my sister’s wedding. I’m wearing five scarves and looking for a second pair of gloves.
I can’t remember the last time I felt sun on my face
but next to some people I look Mediterranean, even now, in February,
my skin giving off an olive oil shine. Relative to the Amazon Rainforest,
we receive almost no rainfall, but the way people talk
you’d think we were drowning. I am not afraid of drowning.
Something about belief in my ability to breathe underwater
in the event of an emergency. My mother sleeps on the couch most nights.
The summer I got second-degree sunburn on a Jersey beach,
I bubbled up and peeled off in layers. I couldn’t wear a bra
for weeks, skin pulled so tight after that just being outside made it ache.
We ate Christmas dinner at the dining room table this year, with the leaf in it.
It’s the coldest room in the house. It was sweltering—relative to the twenty degrees outside,
I mean. Relative to the miscarriage my mother always insists was a boy,
I may as well have been living forever. Something about the way that isn’t enough
to make anyone whole again. Something like wanting rain even during the flood,
because let’s keep it coming, because why not, at this point.