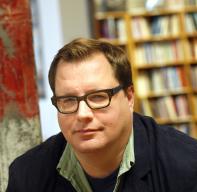 James Cihlar's most recent poetry book,  The Shadowgraph, came out from the University of New Mexico Press in 2020. His previous books are  Rancho Nostalgia and Undoing. His poetry chapbooks include What My Family Used, A Conversation with My Imaginary Daughter, and Metaphysical Bailout. He earned his MA and PhD at the University of Nebraska—Lincoln, and his BA at the University of Iowa. His writing has appeared in The American Poetry Review, The Threepenny Review, Lambda Literary Review, Prairie Schooner, Nimrod, and Smartish Pace.

Aunt Mary Anne gave me two brown finches in a cage. These were my pets in fifth grade. I was ten. The cage sat on top of my bedroom dresser. The birds were round, companionable, and identical. I didn’t know their sex. Usually they sat next to each other on the rung in the middle of their cage. It was fall, the air was gray, the trees were black. My mother had turned forty that spring. Before and after her birthday, she walked through the house with the corners of her face downturned. It was the seventies. She thought this was the end. Maybe it was. I remember her saying to Aunt Mary Anne, I don’t need men. Mary Anne, also a big-boned divorcée, worked her whole adult life at the same job, as a sales clerk at Walgreens at the Crossroads Mall. Before the finches, she had given me a single blue fighting fish. I kept him alone in a round aquarium, blue gravel on the bottom, a green castle to swim through. Periodically he’d cover the water surface with clear, empty bubbles for an absent female fish to fill with eggs. I felt bad that he went to all this work for nothing, that his body needed something he couldn’t control, that no one nearby could supply. He lived his fishy life until he died of old age. But that cold autumn the birds got sick; their taupe bellies, their stippled brown wings, and solid brown caps puffed out as their bodies chilled. I paced the house as I had seen my mother do before. My bird book said nothing about how to treat illness. Although I fed them regularly, the only thing I could think to do was to give them more. I asked for money so I could walk to Ed’s Rexall Drugs on Tenth Street and buy a fresh box of Hertz birdseed. My mother said, almost more concerned than annoyed, the way you are worrying you are acting like you’re gay. Then she gave me the money, I walked the five blocks in cold twilight, bought the food, and fed it to the birds. They died overnight.

As a kid herself, my mother went to a Catholic school where the nuns praised her artistic talent. At the old house, before the divorce, she kept a pencil drawing she had done of Christ suffering on the cross in her top dresser drawer with her lingerie. My sisters and I would secretly admire it. One of her artist friends, Julian, had done a painting for her. He was my platonic friend. She had to explain to me that platonic meant without sex. Nobody called it that then, but he was gay. She gave me the painting when I was in college, along with the crucifix from her brother Sonny’s funeral, which had lain on top of his casket. Sensitive too, Uncle Sonny had been killed young in a car accident. “I’m Looking Over a Four Leaf Clover” was his favorite song. We knew never to sing it in front of my mother. After her death, I claimed her rosary as well as my old Catechism book. Holding it again, I remembered sitting in pews of the brick church in Council Bluffs, studying the angry saints, reading the closed-end stories, following the horrific stations of the cross depicted on the wall, dimly affronted by the notion of Original Sin, since I did not feel I was guilty of anything yet. But even then I knew I must struggle to learn my mother’s lesson: there’s power in bowing to something great and terrible, something so big and unnamable we can never understand. That is what it means to be gay. When I visited a writing class to talk about my book, the young students asked me about suffering. I think they wanted to feel sorry for me, the old, indignant gay. In the studio photo portrait of my mother and her mother that I inherited, Grandmother with her cropped hair and bolo tie looked like a man. My mother was buried in a green and sunny cemetery sheltered by trees on a hill in the middle of the city. No other plots were left. Grandma had bought it for her when she was little, knowing it would fill up. At the funeral, the priest led part of the rosary. I was surprised I remembered the words.