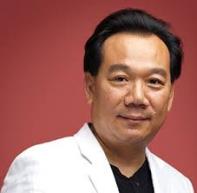 Da Chen is a Chinese author whose works include Brothers, China's Son, Sounds of the River, Sword, and Colors of the Mountain. A graduate of Beijing Language and Culture University and Columbia Law School, Da Chen lived in the Hudson Valley in New York but has recently moved to Torrance, California with his wife, the paranormal romance author Sunni, and two children. Brothers has been awarded best book of 2006 by The Washington Post, San Francisco Chronicle, Miami Herald and Publishers Weekly.

Da Chen's Website
“We Write About Truthfulness,” An Interview with Da Chen

This interview was conducted via email by Interview Editor Patrick C. Dennis. Of the process he said, “It was an honor to interview Da Chen. I admire his ability to write both memoir and fiction with such vividness. It was a pleasure to write questions about his work.” In this interview, he discusses his latest novel My Last Empress, his writing style, and his beginnings in the literary world.

Superstition Review: Your first memoir Colors of the Mountain put you immediately on the best seller’s list. Your newest book My Last Empress is fiction. You’ve also published several YA books. Could you describe how your process differs for each genre? Will you talk a little bit about how the different books were received?

Da Chen: Writing about my own life taught me how to write. Life itself is the best teacher in fiction, for life is truth and wisdom; life has beautiful rhythms, punctuated by seasons, days and nights, weeks and months, decades and centuries. It taught me how to take sizzling moments in life, putting them onto a narrative arc, weaving them into a book. Writing also widens and deepens my reading habits, which in turn leads me to delicious literary discoveries.

I write the same way no matter what I write, for fiction or nonfiction, adult or YA. It’s always this voice coming from inside of me weaving the yarns, and turning wheels. That’s how I maintain the consistency of my voice and how the readers can tell from first sentence that it’s coming from me.

My first YA fiction Wandering Warrior was optioned by Warner Brothers and hailed as China’s answer to Potter by USA Today in a rave review. Second memoir was also an international bestseller. Adult fiction, Brothers, was best book of the year by Washington Post, Publishers Weekly, Miami Herald. My Last Empress garnered The New Yorker review. Kirkus Review gave it a Starred Review calling it ‘Nabokov meets Dream of Red Mansion.’

SR: What challenges did you encounter when writing as Samuel Pickens, a wealthy white New England Yale student?

DC: In writing, we write about truthfulness, truthfulness as perceived by our distorting writerly eye. It is what it is truthful in our heart. So a Yale student is merely a wretched and hapless character in our hands, without which label he could be anyone, a farm boy, or Jedi. What I meant to say is as long as we are emotionally truthful to a character with regards to his plights, conflicts and pursuits, we can write any character. What was human then and there still remains human now and here. Every character is an ‘everyman.’

SR: You describe several sexual encounters in My Last Empress in rather stark detail, yet you do so in a poetic way. How did you negotiate between being frank about what was going on and the beauty you as an author seem to see in these situations?

DC: There is beauty in the beastly. It’s for us writers to perceive them. Sensuality exists in every moment of our breathing life, making life worthwhile. Lust is possibly the most intoxicating thing to write about. I write a lot of about sorrow and sadness which gets old and heavy after a while. But lust is new each time you put your pen to it, our body’s only true seismic energy. And our body, wow, is by far our maker’s finest masterpiece. What is not there to be celebrated from exquisitely crafted earlobes to gentle slopes of our hips, nape of our neck to perfection of fine fingertips. Wow.

SR: Will you describe where you got your inspiration for this story?

DC: I was the Master of Tea at Yale’s English Department, speaking at Dwight House (?) on the campus. The dean there took me to see a statue of this man in front of Commons Dining Hall. I had a morbid moment staring at this man’s bronze likeness, with the caption that read: the First Yale Student beheaded by Boxer rebels in China. That was enough for me. My imagination went wild and a seed of a story was planted deep inside me.

SR: Could you speak to the research you conducted in order to master the historical details for the time period you are writing about in My Last Empress?

DC: I went to Forbidden City to revisit the setting of the novel. The visual took my breath away, then I had enough air to re-breathe back into my novel, making it a living film of my imagination, by making my characters stride along the paved echoing courtyard and running quick-footed along the deep and dark valley with that foreboding walls.

SR: How do you negotiate the creation of an emotional story line when it is weaved against such as a rich historical background such as in My Last Empress?

DC: Love is the oil that greases the gears of this book, love and its nagging cousin, deep and sorrowful yearning. Once you get your characters to have that depth of longing, you can make them jump tall walls and swim wide rivers.

SR: What is most important to you when titling your books?

DC: Title is the theme of the novel. Some people have been writing a novel for a long time without a title. That to me is like carrying a baby around without giving her a name. Titling gives it a focus.

SR: How have other writers influenced your process? What is some specific advice another writer has given to you that changed the way you look at writing?

DC: Some authors have influenced me with their writing. Nabokov teaches me about prose; James Michener teaches me about fluidity of narrative and storytelling. Many comedians enlighten me to the path of humor. I am always aware of the fact that from 8 AM till 1 PM somewhere in Maine, Stephen King is writing daily and unfailingly and if I am not at my desk writing, I feel terribly bad. That’s probably the best writing advice.

SR: How has living in the United States influenced your writing style?

DC: Humor. In America, we like humor and salt and sugar.

SR: At the start of your memoir Colors of the Mountain, you have a short blurb about yourself which states that you are both a calligrapher and that you play the traditional bamboo flute. Can you speak about drawing on your cultural background? Is this different than if you were writing for a Chinese audience?

DC: When I write I lay bare my soul on paper. There is no hiding for anyone anywhere once one starts dreaming about writing. To write is to reveal the deepest secrets inside you. So who you are is what you write about. There is no way out of that.

SR: When you came to the United States, you studied at the Columbia University School of Law, and later ended up working on Wall Street. This isn’t how most authors begin their literary careers. Can you speak about when you first began thinking about writing a book and what struggles were involved?

DC: I wrote Colors of Mountain while working in the city. I wrote a few pages at night, trying to make a book for our first born child, Victoria. It was meant to be a gift to her, so she would know of my narrative and hers as well. Then an agent came along and everything changed. She sold it to Ann Godoff, the chief at Little Random in an auction. I was very lucky to have arrived at the time when memoirs were just happening big.

SR: In your book Sounds of the River, which is based on your time in college in Beijing, you described how the way you learned to speak English from a teacher in your village was very different from the English you encountered in University. This required you to spend a great deal of time catching up to the other students. Can you comment on composing in English versus Chinese?

DC: English allows me to be playful, while Chinese is somewhat somber. I see English as a musical notation, while Chinese as a functional tool of my childhood. This probably is the residual effects of from my book-deprived and poverty stricken childhood.

SR: What are you working on next?

DC: I write mostly in a backyard, facing two lemon trees, one apple tree, and one persimmon tree. This year the persimmon tree yields nothing, not apple tree is overloaded with its fruits, sunken to the ground, nearly. The sky is always blue and breeze inviting. I love the sweet air here. T-shirt is what I wear daily.

I have a squirrel as an infrequent intruder. Never figure out why he has to be so nervous all the time. Take it easy, buddy, I feel like shouting to him each time he appears gingerly, swinging down the apple branch, wrestling with an apple that’s always a bit too big for him to carry home.