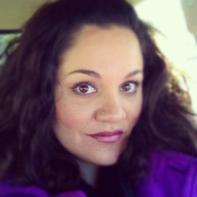 Jennifer Givhan was a PEN Emerging Voices Fellow, the DASH 2013 Poetry Prize winner, a St. Lawrence Book Award finalist and a Vernice Quebodeaux Pathways finalist for her poetry collection Red Sun Mother, an Andres Montoya Poetry Prize finalist and a 2014 Prairie Schooner Book Prize finalist for her collection Karaoke Night at the Asylum. She attends the MFA program at Warren Wilson College with a fellowship, and her work has appeared in many literary journals and anthologies, including Best New Poets 2013, Prairie Schooner, Indiana Review, and Rattle. She teaches at Western New Mexico University.

My father believed he’d invented a forgetting machine—
we spent the soundtrack of my childhood
working on it together, tick, tick, tick.

I was always losing the edges of myself to him.

Songbirds thwacked themselves against
windowpanes in the house fire.

Alan Shepard left three golf balls on the Moon,
1971. Back home, Dad flung his golf club in a tree,
when he was in a tournament and losing.

The Earth, seen from the Moon, reminds us
of the phases we each went through,
together, tick, tick. Rebellious teenager

with her drunk father. Poet seeking redemption
& her Catholic ascetic. He’s
careful in his old age, leaving his ghost-

prints on paperwhite gurneys, a hole ticking
in his daughter’s memory.
From any spot
that isn’t blind on the absentminded Moon

the Earth inhabits the sky-same place:
my wasted father
pissing in the bed he shared with Mama

after sending my baby dolls
splintering to the pock-marked walls.
Tick. I launch these off, unrecorded

gold-anodized plaques, where they’ll
catch up with both Voyagers
then explode.

My son wakes me in the night
because his own strange smell scares him.
He’s wet his bed again, needs me

to change his sheets, his clothes, and
though we no longer live on a pile of trash,
not junkyard dung beetles navigating by Milky Way,

our light obscures the moon, still shining our
wounds fish-colored in the dark,   as leftover
bathwater, the ring in the basin or my

children flapping in the tub, slick as seals.
I grew up too soon, smiling at boys vaguely
familiar. I spent two births. No, not spent.

Lent. What returns is this: floating. But later,
a dawn. Small things come back in pieces.
That time of day I wasn’t afraid to close

my eyes. The white flies weren’t yet lured
by streetlamps; the air still held its damp menudo.
On one side of the house, the cemetery

where I buried a stillborn and a marriage
swollen with ditchwater; on the other side,
a landfill. Downwind, the swine barn where guys

took me nights, its smell of straw-piss webbed
with sex. It’s not so strange my son’s bad dreams
remind me of my own. He asks to sleep in my bed,

so I lay a towel down. In his nightmares
he’s drowning. I tell him they’re just dreams
but he doesn’t believe me, and I don’t blame him.