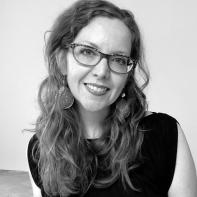 Erin Adair-Hodges teaches poetry, literature, and composition at Central New Mexico Community College. An MFA alum of the University of Arizona, she was the recipient of the 2014 Loraine Williams poetry prize from The Georgia Review. She lives in Albuquerque, New Mexico with mammals she loves.

There is no greater tragedy than to be young
and think you know what joy will look like, and so clunk and pigeon
through corridors and malls, flapping against the linoleum
of heartbreak—the map you found, dirty with the fingerprints
of just everyone, held to your chest like a rosary or a stake—
peeking into chemistry classrooms and corn dog stands,
hot on joy’s musky scent. You could have sworn
you just saw it, over here, by the fire extinguisher
on whose painted door someone has carved I fucked Jenny
in letters hinged like blades, lightning bolts angry and bored.
You think you know joy’s habitat, its sleeping patterns,
on what it needs to feed, and so imagine setting up the lure, trap
jaws snapping on joy’s fat middle and it’s yours, its body
and sickness too. Maybe you try to bait yourself, supine
you glisten with newness, the borrowed body you wear
vibrating its need. It’s so loud you think it could rechart rivers.
You worry for flora and their thirst, wonder how anyone sleeps
with the sound of you crashing in their happy ears.

It is spring and the drug dealer’s shorts are white,
as are the sunglasses he wears cleverly
on the back of his neck, as if to say he sees
the dogs that hunt to harm him. I call the police
every few months, celebration of solstice and equinox.
It is Albuquerque, which is now famous to America
for a television show filmed here about a dying teacher
compelled to make meth, driven by the lack
of a single-payer health care system
and his own heretofore suppressed megalomania.
The featured car wash that serves as metaphor
is behind my brother’s house, the kingpin’s chicken shack
a burrito place we sometimes go to for breakfast.
His apprentice is said to live in a house next door
to my best friend’s grandmother and the hero
kills this assistant’s girlfriend in an apartment
I went to a party at once. Visitors pay to ride
in a wan RV like the one the white actors
cook drugs in. It stops to let tourists out to pose.
They reenact famous scenes. Across from our house
on Christmas Eve, we see the drug dealer
pound his fists into his girlfriend’s head. My son
is coloring in reindeer, some elves. When the police arrive
the woman is gone and then nothing happens.
We watch the show and I cannot tell from where
all the gunshots are coming.

Whatever is not true to you
is tattooed on another man’s arm,
ringing his bicep and yelling

but such is the price of free will.
When I am rich my to-do list will be long:
open a factory that makes only smells,

teach a bus stop to fox-trot and salsa,
use the fridge light to write odes by,
and while I don’t want to have sex

with other poets I do want to do
it with their poems, to slide
between the lines of a couplet, shiver,

and then sleep til the end of rhyme.
Certainly we have the time for that, at least,
to find the words they’ll bury us in,

singing over whatever’s left
a tumble of jumbles pushed out by tongues
because to keep living is the loneliest thing.

Forgiven, my father says he struggled
to not hit us the way his father
had punched and smacked and kicked him

and so my father is a man who had thought
of putting his boot to my head. When my son
pushes me, saying not you, not mama, go away,

I think of giving in to him, leaving
in the old way, cheap gas way, driving
until all is borderless and taking with me

only impractical clothes. After he was born
I did not want to die but nor did I exactly
want to not-die so I imagined escaping

to Prague, getting skinny, and wearing
knee-high boots as I walked the languorous walk
of those who have somewhere to go and all the time

to arrive, over the city’s storied skin bulging with violins
and sadness, kavarnas exhaling smoke, drunks
spitting crude come-ons because it is late
and I am beautiful and I am alone.