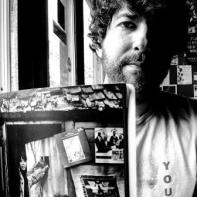 Tom McCauley is a writer, musician, and arts administrator living in Omaha, NE. In 2011, he received a studio fellowship from the Union for Contemporary Art and was nominated for a Pushcart Prize in 2008. From 2007–2012, he co­edited Strange Machine poetry journal and Strange Machine Books. His poetry has been published in The Oyez Review and Leveler Poetry. He is currently working on a book, Street Life Fragments, with photographer Sam Herron.

The Tree May Die, Yet the Shadow Remains

Once highly prized among the pioneers of light,
the hours now lean heavily toward the ground.

from a ruined lens could account for this,
but the air was thicker, it could hold things

for a moment: grown men
strapped to pterodactyl wings,

the morning moon in its upturned face.
Long ago, cameras conquered dust.

A woman saw herself as others see her,
not in a mirror, but staring straight out into the world

like a lioness, queen of all Ohio.
Tonight her skeleton fosters a subterranean civilization:

microbes, complex worms, decay.
But the ambrotype in her descendant’s attic

is poised as ever to ravage the industrial age,
(in that room, it is always noon) thank you, chemistry.


First Date with the Moon

In California, I was made
to trace the moon
for sixth-grade science class.
The lunar phrases I repeated
under my breath as we
visited the ocean and Disneyland,
where a sour mood assailed me,
created a cloud of suspicion
around our tribe. “He's so...sullen,”
somebody's uncle told mine.
You must wait two hours
to ride the future cars,
which last ninety seconds.
Once part of earth, the moon
roars whitely in the night
vacuum, so angry
you can’t make friends with it,
nothing like the soft piano tunes
you imagine on a first date (with the moon).
Soon, my notebook filled
with black scratches of crescents
and half-circles. I desired pancakes.
The moon parted the curtains
late one night to insult me.
“Fatty,” it taunted. “Fatty fat.”
I woke up weeping, remembering something
sand-flavored Grandma had said
on a drive through the mountains.
“What's Tom gonna do?” she waxed.
“Nothing. Nothing!  He'll have to go out
and get a job, just like his mom.”
Fifteen hundred earth miles
from the Trans-Mississippi
and International Exposition,
or home, as we called it in the hinterlands,
I made a great crying noise
like the teenagers from Colorado
on TV that week, who’d been shot
during Astronomy lab.
The next bed over, my aunt pretended not to notice. A travel agent,
she’d glimpsed the moon
from every time zone, even China,
and said it’s nothing
to lose sleep over. It will always be there.

We were the family that invented tornadoes.
Everyone looked to us for piano lessons,
Kool-Aid, moral support, etc. Our trees
glowed better than anyone's. No radios
hanging on wires from upstairs windows,
no overturned laundry baskets
in the driveway, just a backyard
full of grass and holiday lights
all year. Time and weather moved us
to create a vortex from the sky
that would sincerely fuck the world.
It was a genetic affair, John drawing
blueprints adorned with equations
and photos of his ex-girlfriend
with her new Moroccan lover,
me trying to think of a name for our project
on which to launch a revolutionary ad campaign.
The Cloudinator? The dancing circus funnel?
Nothing stuck. Of course, we couldn’t know
the destruction we would unleash
upon Nebraskan roads. In retrospect,
how could we not?  We were a family
blinded by gratitude and respect
for one another and our place
in the neighborhood. We were slumped
over our dinner plates one night
when I thought up the name.

As a child I stuck my head
in bags of dusty toys
to smell the disassembled cities.

What dreams of nightmares wakes
to night milk on the stairs,
where belladonna tendrils

draw documents from my shoulders.
Echo, you were my Letter Horse
for an afternoon. We sang delicately

in a bottle of fireflies.
Do you think God will keep my gate
safe from elephants like me?

All day devouring conundrum pie
down dark furnaces of bronze & lye,
I'd make your grandma flip the Jesus

hologram toward the wall.
I couldn’t stop screaming.
Please rewind the sunlight cassettes,

Mrs. Richardson. I want to leave
a garden in your knapsack.