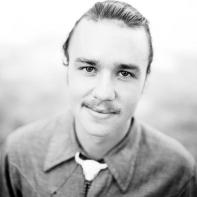 John Goodhue is a graduate from Western Washington University. His poetry has been published or is forthcoming in Cleaver Magazine, Spoon River Poetry Review, Knockout Magazine, and burntdistrict, among others. He currently resides on Bainbridge Island.

find in the study a photograph,
where a thicket

of banana trees, greyscaled, is
burning. Toward the viewer,
a man carries a leg

from thigh down,
his sunken palms spread
from ankle to severance

as if guarding an only rifle.

The leg—its bone spurs,
its stippled flesh—like a godsend,
born of some greater absence.

Behind, I notice
what the fire has not engulfed:

several figures bowed in bright pools,
a lady donning an apron,
a child chasing a dog,

and the meaning of this—

there is no sky for a body
to leave into; the heft of being
is not a pretense.

I notice the man’s stare
could too be a map
of more than just bones,

or how he could be saying
“hallelujah” just the same
as “landmine.”

In this version, a man dies
arms trussed between swathes of trees

to consider both you and the moon
befriend first the corpse, then the reason.

in a world whose momentum is love of … And when no one considers
what god is rendered by scarcity.

And when considered is this man, beside a thistle plant
a sudden flutter in the chest

And you, now cradling his figure,
a quality, an antiqued linger of life once assuming, or how

you hold up his arm in space as though it filled none, the poor flesh,
the weeds burgeon wrongly, everything

burgeoning, wrongly. These trees
preserving too many raw moments.

their indifference. Everything suggesting famine
as you undress the body, ready its milking