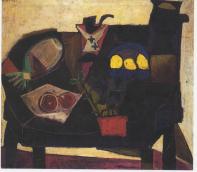 In 1979 Akiba Emanuel wrote “I begin where a visual artist must begin: to see in simple, tangible objects the catastrophes and pleasures of my life, and to translate them in[to] a language of form.” A child of Russian and Lithuanian Jews who fled Czarist anti-Semitic violence in 1908, Emanuel was born in Scranton, PA in 1912. As an artist, Emanuel lived at the edge of fame and worldly success. His intense work couldn't be identified with a specific school of painting and Emanuel himself hated the public relations a career in art requires. A catalog of his work can often be found on Amazon: “Akiba Emanuel, 1912-1993.”