"Napkin Notes to My Bartender," by Amanda Nicole Corbin 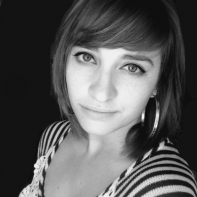 Amanda Nicole Corbin is a Buckeye fan currently in Salt Lake City, who has been published in Ellipsis, The Vehicle, Boston Literary, the forthcoming issue of Paper Nautilus, and others. She is editor and founder of Pure Coincidence Magazine.

Can you tell when my tab mirrors my weekly mileage? Martini to mile to ice rocks to road rocks to mental blocks. I saw the way you resisted raising your eyebrows when I told you I drove 200 miles away to the Glasgow casino to escape my daughter's puffy eyes. Maybe you can tell how the eraser smudge mark on my neck is not from my husband’s lips, but a fresh curling iron kiss to bounce my hair back into its twenties.

I’m the boy hunting rock candy with only a nickel jiggling in my pocket: dime-carrying on the weeks I’ve been good, dollars thong-hidden when I’m bad.

Do you smell the twenty-two years I wish I was wearing? A bottle of Chanel, its vintaged ad, promises me only the wrinkles that fade after laughter: Victorian Era Faint. Men don’t graze my wrists or touch my hips because they see I don’t smile when I hit seven seven seven on the slots. Ding, ding, ding!

777 is a funny number. I know God changed his address years past. In fact, He even left me emergency contacts; I’m watching dish channels and stealing fridge-beer and laughing at the women who keep their wedding rings on while they stain other men's shirts. They're in a competition with those chewing the chains of gold crosses hanging off their thin necks. Heaven is not here with us.

Do you ever get sick of the kaleidoscopic floor? I’m already sick of it after an hour of being here. I can't imagine seven more of staring at the primary-colored waves washing over the vomit-stain puddles, trying to hide our burdens of overindulgence with toddler-room hues. The carpet reminds me why I'm here; my daughter is simultaneously learning to drive on the road and to curb her morning sickness. My daughter, who used to crawl over plush reds and carpet blues, is learning the driver’s seat on the way to shop for car seats.

I saw you catch me the time I forgot to pocket my wedding ring outside in the car. I was busy untucking my breasts and warming my smile as I pushed through the doors. You were the only one to notice me, because you're the only one I pay in bills. Again, you said nothing because you've seen it before

But you haven't, because I'm the only woman here who smudges her own lipstick by kissing wineglasses instead of shaved cheeks. Flirting won't change the chemistry of a stagnant marriage. But I won't cheat. Even if I was smart enough to count the cards.

Hell, if he tasted me more often, my husband would say my flavor's unchanged, only aged. Taste is such a fickle thing: last year's sweaters are this year's quilts, time to peel your favorite color off the wall. My daughter's already rejecting her favorite meals and replacing vitamins with onion rings. Teenage couture.

I know I had her young too, but I don't believe in modeling. If I believed in this monkey-see: monkey-do crap, I wouldn't take a seat next at the blackjack table next to a bowler-cap man down five thousand. Next, he’ll lose his car. I believe in coincidence for what it is: lackluster luck. We're the busted hand that God got dealt.

The bar looks like a space-faring vessel. With your sober eyes, do we all look like lost life wandering from dinging star to clanking planet? The first time I saw my daughter cry about her pregnancy was when her Lucky jeans wouldn't button. She’s not prepared to look like a planet. She has no idea how much worse it gets, what you must see daily, or what God thinks when he checks in with his rough draft of a planet. I've started ordering tonic to lose weight, myself.

Today’s the day I really need to go back home. The word abortion’s been fluttering in the air like a butterfly, and none of us have a net. For a week, it’s been a festering chrysalis in our throats, but I bet myself a drink I wouldn’t be the first to bring it up. I wonder if it’s possible to tell if the people gambling here are aware of the scarlet symbols on their sleeves.

What’s mine? I’ve almost asked you once, but I see you calculate: the higher my heels, the stronger the drink. I thank you for that. Though, I do hate the teetering and tottering that I fall into after the fourth, but it lets me forget I’m only an ethereal representation of my single, college-aged self. Even though in those days I was already paying babysitter fees for Friday night fun.

I want to say I won’t need you anymore after today, after I gamble away my daughter’s college savings or win enough for years of daycare and a crib that rocks itself. But it’s no stronger a declaration than my fleeting diet regimens: start Monday, lose ten pounds by the next, and by Wednesday, find a donut in my hand.

The alcohol I can find at home, but your oblate eyes, measuring drinks behind the cedar bar, keep me from twisting hairpins into my palms after the return home.

‹ Fiction up "Pieces of My Junkyard Father," by Christopher David Dicicco ›