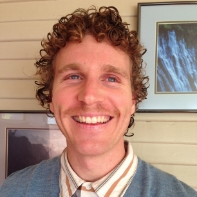 Nathaniel Miles Millard, a PhD candidate at Utah State University in the Department of Environment and Society, currently teaches courses in Sustainability, Academic Writing, and Outdoor Education at California State University Chico. He has various research and creative publications. He can be found most evenings hiking a ridge line; while he writes in his notebook, his dog sniffs the air.  He maintains a blog he writes for his friends and family called fitweed.

A storm approaches my home. Clouds pour into the valley from the west. The water that leaves this valley in the Bear River, skirts between Mendon Peak and Gunsight Peak, with a brief interlude in Cutler Reservoir, comes back through the same gap in the mountains riding winds of temperature change. I can feel the change in the air, and rather than hike the ridges, we stay on the main trail up Dry Canyon. Green is retreating. Trees are packing up nutrients for the winter. Before the leaves senesce, the trees prepare and stockpile. Like the smell of peach butter, applesauce, and tomatoes being canned before the first frost, the trees store what they can, and pack away the swimsuits and flip-flops from summer. The abscission process slowly begins as the chlorophyll fades; it is dormancy not death. The tips of the leaves of serviceberries, big-tooth maples, and sumacs dance like fire-flames in the whipping winds. Carotenoid unmasked to the wind.

I am leaving soon. In a last minute show of colors, leaves light up the forests before they fall. Was it worth it? Piles and piles of leaves, thousands of tons of biomass dropped to the ground. For what? Millions of leaves each year give back to the ground. We are canning the sun like engrams of memory as the earth turns on its axis. The branches are hands grabbing for solar gifts; for a brief turn of the earth, the trees stuff the gifts into pockets and reach back out to the sun with bare boughs. The colors say thank you, thank you.

Winter flocks of chickadees dart in the gusts of wind; they have given up their territories and join together. All summer they squawked, fought, and protected their small place in the world, and now they give it up. Times will get tough for a little while, and we need each other. I don’t think you are guaranteed love in this world, but life has little value without it. The whole thing collapses. There are moments in life when it abounds, and times when it is tucked away into pockets, packed into boxes, loaded into a trailer. In a migratory moment, perhaps it fades to a winter sun. Love happens in a place.

They say the reason we stood up is so we could free our hands to carry food back to our mates, to our kin, to our children. Love is the reason we come together. Our social brain is a brain of desire, longing, and love. They say evolution is about reproductive fitness, not muscles and looks, but care and provisioning.

We all make mistakes, miss-spell words, run stop signs, sing out of key, crash, and get hurt. They can feel like stabs to our self-identity. In my own teaching, I learned my goal was to put students in situations where they would make mistakes. Not because I wanted them to fail, but because I wanted to see how they succeeded in the moments after. Failure, confidence, success is part of our social world—too often we compare to others to find our success. Erin complains that I do that often in our relationship. My confidence has been stabbed. I feel like a naked tree, ridiculed by an angiosperm. I winter flock alone. I perch and squawk. My song is out of key. I used to listen, at Whitman’s urge, to the sound of different drummers. As a writer, an artist, I used to seek dissonance. I have always wanted to hike trails nobody else hikes. I have started to hike off trail, to follow game trails. Nonetheless, it is never different. I see paths everywhere, even in the way I see, in the words I write. Every word is filled with people; every thought has a history.

Chico and I hike to the cattle gate up Dry Canyon and stop. He bounds ahead leaving his last scent behind. There is a large campground there, with fire scars burned up along the rock. The rock is a horrific reminder of power and destruction, both natural and man-made—striations mark the uplift of sea floors that happened so long ago, blackened now by the use of humans for a fraction of its ruptured, vertical life. I can imagine centuries of people huddling under the overhang. The lingering black remains of burned maple and juniper indicate the continued use of this place. Stories were told around this campfire, myths were made, morals developed, and paths drawn out onto the night sky—constellations of continuity in the human race. I might be Orion with my dog next to me. We have only fragments of those early stories, references from other stories about other stories. Was it bravery or lust? Is he a womanizer, a killer, or a great hunter?

The hunter died, the naturalist lived. Some stories say Orion killed because he could. I would venture to say the scorpion killed because it had to. The naturalist was Orion’s friend. It is a long hike back to camp alone. He carries Orion’s belt and club to his family. He tells them a story and points to the stars. Orion was a friend to someone, a good hunter, and he forgot to check his shoes for a scorpion. The story is repeated around campfires as stars emerge. All night they stare at the three stars and promise to themselves to be more careful than Orion. And when Homer’s red-fingers of dawn cross the sky, they carefully pack up to head home. Poor Orion.

But that is only one version of Orion. History is always up for interpretation. Hermes is the god of interpretation. The messenger that carries Zeus’ warning for Calypso to release Odysseus so he can return home to his family. Herms were used as boundary markers for property; they mark the trail and tell us which way to go. They were piles of stones that grew into pillars. I used to knock all rock cairns over that I saw. They told a story I didn’t want to hear. They reminded me I don’t ever walk alone. History is always on top of me. It was a burden heavier than my pack. But when you are lost, there is nothing better than finding a trail marker. Daniel Boone once said he had never been lost, just befuddled for a few weeks.

We think, with our GPS units, Google maps, cell phones, and topographic maps, that it is hard to get lost these days. I used to want that. Now I look for paths. I realize now that there are paths as old as humans have been walking. They are paths most of us zigzag throughout our life. Paths are easy to see, hard to stay on. Someday I hope to be a father. Right now, the hardest path I have walked is that of lover. I am getting better at being a friend, a neighbor, a member of a community. I am trying to understand what it means to be human.

I crashed recently on my bike. I was riding with my neighbors on the Hi-line trail. Willie was in front of me as we raced along the mountains edge. He flipped off his bike and tumbled down the trail. The trail was hard to hold, small rocks were everywhere and it sloped down. I was fighting to keep my wheels on trail, when eventually I popped off it. The mountainside was steep and strewn with scree. I couldn’t stop. Willie was rising from the dust of his fall as I bolted by him on my bike. I could see other trails going down the mountain. It was too steep for my brakes to work. Each little side trail I tried to hold for a few seconds until gravity pulled me further down the mountain. I couldn’t hold on to a path. I was fast approaching the trees. My mind was racing, trying to find a way to get back on trail. Then I approached a downed tree. Perhaps I could jump it, I thought about it, but there was no way. For me to jump it, I would have to surrender my contact with the earth. I would give in to gravity at its completeness, only the wind as my friction. I hunkered down and hit it.

The author, Chris Cokinos, a friend and mentor, once showed me a technique in writing used by Chet Raymo to stop time and expand out. Raymo does an amazing thing at this moment when he describes a body falling:

During the time the child was in the air, the spinning Earth carried her half a mile to the east. The motion of the Earth about the sun carried her back again forty miles westward. The drift of the solar system among the stars of the Milky Way bore her silently twenty miles toward the star Vega. The turning pinwheel of the Milky Way Galaxy carried her 300 miles in a great circle about the galactic center. After that huge flight through space she hit the ground and bounced like a rubber ball. She lifted up into the air and flew across the Galaxy and bounced on pavement.

So much of movement is about perception. I understand that distance, not in space or time, but in loneliness. In perhaps no other moment then in unexpected falls, and I have had my fair share, we lose any sight of paths and are lost spinning through space. Some people try to seek this out. In the few times I have been lost in the woods, I did not feel the adrenaline junkies’ high. Death is the ultimate lost and yet we all walk it once. It is an unfathomable trail. When you are lost, or losing, you can smell the dust lift in the breeze, feel the heat, and hear the dry grasses rustle and the grasshopper stridulating.

But I am not Orion; I am a naturalist with a story to tell. With a cracked helmet, separated shoulder, bruised ribs, sprained ankle, and few good raspberries on the skin, my neighbor helped me back to the car and took me home. When I couldn’t swing the hammer to finish some work on the house, he swung it for me. Every path is a narrative; every word has a history. Stories are bound in place. I am part of an arching letter, the swooping tail of an e, the spiraling arm of a galaxy, a constellation, a part of a word in a sentence in a myth we made. We are together—lover, friend, neighbor, citizen, being, earth. Heal me; forgive me; tell me stories.