"Roaming the Streets" by Paul Dickey 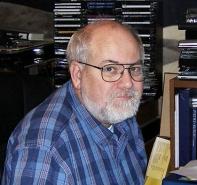 Paul Dickey’s recent book Wires Over the Homeplace from Pinyon Publishing was released in September, 2013. Dickey is a poet and philosophy instructor in Omaha who has published poetry, fiction, plays, book reviews, and creative non-fiction. He gives poetry readings and workshops throughout the Midwest in colleges and elsewhere. Dickey’s previous volume of poetry, They Say This is How Death Came Into the World was published in 2011. Besides his poetry, he also has published two e-books: a full-length play, The Good News According to St. Dude, and a collection of light political verse, Liberal Limericks of 2012.

I pluck the hours of the night like strings of a harp,
coaxing out of it remnants of a melody. All she wanted
was that we be joyous. Dawn and tomorrow’s midnight
are becoming the what-is-not in a half-empty cup

of shadows. They are there already, in the alleys
and under the street lights, the places where hope
germinates. A lady of an old faith but in new habits
handed me the broken machine of a rose tonight,

and I thanked her for coming. My eyes begged for more.
I peeled off each of many faces, analyzed its heritage,
texture – until no one was left on the street to watch me
spill myself into rivers. I will go home to a room

of fog and silk, to the pleasures of living where there
are no faces, where mirrors are more like clouds than lakes,
although she warned me – everything and everywhere
she had been with me might be as empty now as glass.