"Things I Don't Tell My Mother" by Allegra Hyde 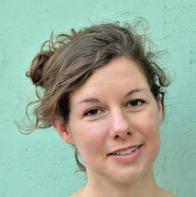 Allegra Hyde is the author of Of This New World (University of Iowa Press, 2016), which won the John Simmons Short Fiction Award. Her stories and essays have appeared or are forthcoming in The Missouri Review, New England Review, Gettysburg Review, The Threepenny Review, and elsewhere. She is the recipient of a Pushcart Prize, as well as support from the Virginia G. Piper Center, the Jentel Artist Residency Program, The Island School, and the U.S. Fulbright Commission.

A phone rings in a kitchen on the other side of the world.

She sighs into silence, as if content to hold the receiver and know that I am alive, that for the next few minutes I will stand safe inside a phone booth.

My talking, as usual, is breathless and erratic: born of a phone card’s dwindling credit and a country that precipitates an avalanche of words. But my mother never objects, even when I call after ten PM. Our time zones flutter open and closed; sometimes it’s hard to remember when waking hours overlap. In New Zealand, I am a day ahead and six hours behind, but it still feels as though time stopped the day I left home. I can picture my mother leaning against the kitchen counter. I can remember New Hampshire, locked still and silent beneath a blanket of January snow. She can only see the things I say.

So I don’t tell her everything. I don’t mention how much I’ve spent since we last spoke, that my savings have dribbled and flooded towards that vast financial watershed of Broke. It’s not something I can explain to myself either. For the past few months, I’ve lived out of my backpack and licked bowls clean. I’ve slept on couches and pebbled riverbanks, even worked the odd job washing windows for bored housewives, or shoveling shit on short-staffed farms. That said, my pockets are full of Cadbury wrappers and ticket stubs to music festivals. And it seems painfully cliché to run out of money on a trip already cloaked in unoriginality. I needed to “find myself,” I’d explained to my parents before leaving—easy rational for a twenty-something, over-educated and jobless—but in truth, I had a greater interest in finding stories, than myself. “Life is about their accumulation,” I’d once heard. And New Zealand, that island antipode, the setting of fantasy films and adventure blogs, promised to be as rich a source as any.

Too rich, it was starting to seem, as I struggled to finesse their telling.

“I’m in a town called Motueka,” I say to my mother, omitting the story of how I arrived: the ride hitched from a parking lot outside Marahau. I’d been camping along the Tasman Bay for several days. I had run out of food, along with the will to hike. I leapt at the first car to offer me a ride. A red car, with rust like gilding and a driver, dark-skinned and brooding. Maybe he’s Maori, I thought, throwing my backpack in the boot. I felt nervous, then angry with myself for being nervous. I buckled in, determined to accept the lift.

The driver was from Fiji. He chain-smoked while he drove, alternating cigarette drags with opinions I hadn’t solicited. He hated his job, he told me, picking apples in the Motueka orchards. He hated his wife and his children and being told what to do. He hated The United States of America for reasons that disappeared into smoky hacking coughs. As we tore along a narrow coastal road—lush bush on one side, sparkling inlets on the other—his car gathered speed and his words picked up volume. He was fucking tired. He was goddamn sick of it all. The car barreled around a corner, on two wheels. His eyes roamed off the road and onto me. He did like sex, he said. I pressed my bare knees together and looked out the window. An apple orchard blurred past; pickers leaned from ladders into foliage. I wondered if I was going to die.

“This town has a really nice library,” I say to my mother on the phone.

I will never know her thoughts on the ride. I won’t get her opinion on that foggy place between apprehension and prejudice; the story is too much about a daughter my mother doesn’t know. I can’t tell her for the same reason I can’t describe being nearly arrested: explain that I took a free shower at a busy holiday campground and thought no one would notice.

“Where do you think you’re going?” said the campground manager, as I tiptoed towards its exit, reeking of shampoo.

He was a short man, uniformed in a blue polo shirt, and gleefully enraged.

I wanted to laugh at this: to tell him that I’d smelled so bad my shower was for the public good. That he should be thanking me.

Then the man added, “Give me one good reason why I shouldn’t call the cops,” and I wanted to cry.

In retrospect, crying might have been helpful. I gave the man twenty dollars and he gave me a lecture on ethics. I walked away feeling clean and dirty at the same time.

“Today I saw a bird called a Pukeko,” I tell my mother. “Last week I saw dolphins and now I’m staying with an old lady in exchange for a few hours work. She has a house with every room painted a different color.”

“What color is your room,” asks my mother.

Later, I might tell the shower story to some friends from college, the ones who find petty crime amusing. And to an old car-pooling coworker: the hitchhiking scare. My trip could only be shared, I was starting to realize, but only as fragments—as moments carved off and scattered—while the entirety remained pitted, untold. Telling the whole thing would take a listener who forgave every facet of its teller: someone who could sit through steep climbs up the Canterbury Mountains, the sulfuric gasps of hot springs, and the multicolored rooms of an old lady’s house. Hippie communes and barefooted concerts. Curtained vans and bon fires, drumming, and drugs tucked into palms. Stories for my brother? Maybe in a few years.

“How’s the weather?” my mother asks.

“And it is snowing here.” She says this smiling, I imagine.

Stories build upon stories, gathering like clouds, like snowflakes, like the bricks of an imperfect house. They grow inside breaths drawn deep against the soot of an Auckland bar, or gulped after surfacing salt-mouthed from a turbulent sea. There’s so much to say; too much to say. With each passing instant it becomes harder to keep up with their telling: the boat ride and the albatross, the “Haere mai!” and unfamiliar constellations. There was that scab on my knee and the plate of venison and ten dollars gifted by an old lady. Stories wedge themselves between seats on a bus. They appear in-between days and on the tops of Kauri trees. They get too long, too boring, too cumbersome for one listener. Even for one’s mother. Especially for one’s mother.

My phone card is about to run out. I hurry along to the one story I’ve been saving.

“There was an apricot tree on the lady’s front lawn,” I say.

My mother thinks this is lovely. We dream of fruit trees in New Hampshire, of produce that outlives early frosts and raccoons and the long shadows of deciduous forests. We dream of sweet pears and oranges and apricots that wait year-round for out-stretched hands.

“The thing is,” I continue, “she made me cut it down. She wanted more light through a window.”

My mother knows why this hurts. She feels what I feel—that ache of lost possibility—so much so, that for a moment I wonder if I should have skipped this story too.

But there’s no time to dwell; I’m almost out of minutes. “I have to go,” I say, sensing distance already unspooling between us.

“Goodbye,” my mother says, before hanging up. “Stay safe.” She speaks as if all the air is being sucked out of her.

I resolve to call again soon, to tell her what I can. I realize I’m sweating; caught in the afternoon sun, the phone booth has become a greenhouse. Hoisting my backpack, I step out onto the sidewalk and start walking through Motueka, its one-story streets stretching towards green. Walking upside down, my mother would say, from her perch on the world’s other side. I’m alone again, and in my own head—in my own narrative, really—spinning into another secret. But that’s the nature of travel, isn’t it? To fill up with stories you’re unable to tell. To realize that’s not why you collect them.