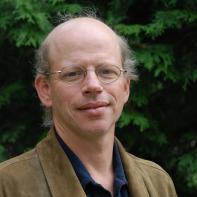 Fred Leebron's novels include Out West, Six Figures, and In the Middle of All This. He has received a Pushcart Prize and an O. Henry Award for his stories. Currently he directs writing programs in Charlotte, Roanoke, Europe and Latin America, and teaches at Gettysburg College.

‹ "Pieces of My Junkyard Father," by Christopher David Dicicco up "13 Ways of Looking at My Father in His Bathing Suit," by Jim Daniels ›