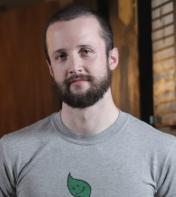 Christopher's poetry has been published in blazeVOX, The Aura, Danse Macabre, Drunk Monkeys, Poetry Super Highway and Rufous City Review. Christopher is currently a twenty-four year old undergraduate at the University of Alabama at Birmingham. He is a musician involved in three current projects: Philos Moore (singer-songwriter) In Snow (Instrumental), and Loveislight (Experimental Hip-Hop).

These relics weren’t always disguised by sleet.
That letter resting between the envelope’s wheat-

thinned lips will sit unfinished, indelible
and shapeless as most evenings are. This man, unavailable,

lean, would never have read past the stub,
why the trouble, why the bother she’d say. Now her ink that flubbed

the lines is splitting, and the water we sip has lost its luster. The tissues
are still there, mapped out as at most funerals—fashioned to carry

the worry, caress anchored blame. She holds her image as his
blank reflection: the organless frame of a carcass, rawboned,

whimpering. Most ends begin the same in church: the cross
a fable, the garden in her mind consumed.

The exhibition of perpetual time, she said in greasy
rhythms, a spoken reminder never that necessary. A sleazy

nostalgia crept along the shallows of her spine. The drapes
along the window unloaded the room’s light: a pro-bono

until a lobster-flushed hue trilled down each corner; mending
a red sky against her stale bones and the year’s cracked lips.

Sunday, and Lampposts are Frozen

While the future’s black whiskers sweep our necks,
a shy creep of fog
trips into each nest of flood grass, and down
the pike
rust blooms against the soil’s iron spine. Cave swallows
footstep gusts
above us, if only to stretch grass over the tarmac between
their wings
like the foiled image of misfolded robes--
my boyhood began lapping me again.
At sixteen I was telling God to give me
back my wallet. I Breathed steam
into the grass—brother told me to come inside, and
the ruin-fields fell
quiet; bruises in the sky healed and the land caught
fire as
the evening sulked in. The next morning, watermarked
stone beneath
the rippled lines of marsh water lent my reflection
back to me;
the relief of the land rising and drowning behind me.
Did the
cave swallow notice me fall to knees in careful
if not perfect
knots? Where I am now is where I was then—
budding with the ruins.

‹ "Manatee" by Catherine Martin up Four Poems by Deborah Bogen ›