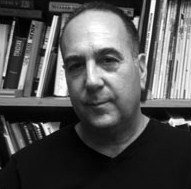 Bruce Cohen’s poems and essays have appeared in AGNI, The Georgia Review, The Harvard Review, Ploughshares, Poetry, Prairie Schooner & The Southern Review as well as being featured on Poetry Daily & Verse Daily. He has published three volumes of poetry: Disloyal Yo-Yo (Dream Horse Press), which was awarded the 2007 Orphic Poetry Prize, Swerve (Black Lawrence Press) and Placebo Junkies Conspiring with the Half-Asleep (Black Lawrence Press). A new collection, No Soap, Radio, is forthcoming in 2015. A recipient of an individual artist grant from the Connecticut Commission on Culture & Tourism, he joined the Creative Writing faculty at the University of Connecticut in 2012.

Everyone in the grocery was over-the-top polite,
Graciously insisting those with fewer items cut the line.

Though I never witnessed the despair of Paris after the bombing
I have faith The Optimistic bricked up the wine cellars, hid

The rarest wines. None of these children would ever break the century
Mark bowling without gutter guards. What does it take to love

Again after such loss? The first human who’ll live well beyond
A century & a half is alive today. Should refrigerator art

Be taken down while parents bury their kids?
A man I don’t know well had a daughter killed in a freak

Skiing accident on family vacation. The attending physician
Asked what the hospital should do with the used-only-once

Skis. The man, inhaling a grapefruit for ripeness, asked what
I thought he should have said. Waving-neighbors move away

& new neighborhoods spring up. College kids, home for the holidays,
Bump into someone they used to know. Though I’ve never been

To Paris I have reason to believe the cafes again have unearthed the rarest
Bottles. Those with perishable items, they clutched to their chests—

Go ahead of me. Everyone in the express line was patient with those
Who fumbled for the misplaced currency in their jacket pockets.

You can tell when you’re overwrought:
You click impulse-purchase an online ticket for your own life-movie,
Forget, & spring for another when you get to the theater.

You think of your life as a low-budget B-rate black & white grainy film,
An off, Off-Broadway production financed by silent, invisible
Backers, casted with wannabe-people constantly late for rehearsal,

If they show at all. You are dazed in an empty-ish parking lot after the show
With a strange set of keys in your fist, doing the psychological arithmetic
Of which state you’re lost in: Nebraska minus Idaho divided by pure

Anxiety, playing Red-Light Green-Light with any vehicle that responds
To your key-beeps, wondering, a little panicked, if you came with anyone.
Bad memory: your father whipping off his belt for the life-lesson,

Your octopus mother suffocating you in fleshy suction arms.
When the phone chain trickled down to your old man that his own mother
Died he gently laid the receiver in its cradle, knocked back a half glass

Of half decent scotch, fetal-curled on the saggy couch & fell instantly
Into hypnotic snoring. Whenever you inch toward ruining your life
You take up a new hobby, gluing rusty dumpster objects to headless dolls.

Upstairs, the radio radios at you. You hope to be the fourth caller for
The free tickets to the show. Even after finding your car you realize
You booked the same dinner reservation two times: evidence of your double

Life, not the nightmare of living twice. You sense that maybe
For the first time in a long time you will be gently caressed by human
Hands will be after you have passed away…

Of being. If not I should
Take a seat until. The chairs are not exactly plastic & bolted to the floor.

She sort of tortured me into showing her my lifeline
& suggested not un-motherly that I use hand cream since it’s dry skin season.

We are this intimate: the lady has a new mistaken piercing in her left lobe
& I can smell the apple-cinnamon oatmeal she ate for breakfast.

It should be noted in this environment it is not crass to ask someone his age
Then tell him to wait until he hears his name called.

Nobody smiles unless they see someone they recognize
Then they engage in a clichéd conversation about how they dread this institution.

The counter phone rings but the lady doesn’t pick it up. I imagine the person
On the other end swearing at the person not picking up. Sixteen-year-old girls

Are giddy texting while their mothers are trying to ask them something important
& televisions are bolted to the ceiling for our viewing pleasure, the sound off.

The process is more complicated if you come from someplace else.
I didn’t realize I’d have to produce documented proof of a permanent existence

As though my UFO’s taillight was out so I got pulled over & now
I’m here. The written exam is not hard but parallel parking is what gets ya’.

Although I disagree with some of the test-logic & was unaware of the hydroplaning
Concept, I am versed about the mechanism by which one registers invisible vehicles.

The lady called her supervisor over & conferred before ordering me to step out of line.
So much of life is a mild interrogation & correcting folks who mispronounce our names.

On The Tip of Your Tongue

If you can’t find the right word to express an emotion, make one up.
For instance, you say you don’t want to be alive but aren’t ready to be dead
Just yet. Or, create a word entirely comprised of silent letters.

Outside is a grayer world, the only color the blue tarp in the shape of a wood pile.
Inside, a business man coughs in his gray suit reading the gray evening.
Of course soap incrementally dissolves but dutifully performs till it is no more.

The modern sleek chairs won’t be shipped till next week until then your game
Of Musical Chairs will be Charades or else you can play Red-Light Green-light
With your younger self sneaking in after curfew. Imagine your coworkers

With their clothes off. No one ever gets naked enough. Is there such a word
As unaccumulating? As if on cue, a flash mob of women pulls up their blouses
& flashes their breasts to the cloud covered moon. The moon men toss down

A colorful necklace of rain from the balcony of moonlight. Sometimes people
Find themselves running alongside a teasing car, banging on the dark windows,
Mud spraying from the tires making a Jackson Pollock of their white gowns

& tuxedos. You may now kiss the naked air between what you love & what you
Thought you loved. Think of the bank robbers who stormed the lobby
In their Ninja Turtle masks & automatic weapons & recited their rehearsed soliloquies

Before demanding everyone disrobe & start kissing whoever was next to them—
Whoever—then sliced open the canvas bags, fluttered the stolen bills from an overpass.
It was quite blustery & people were chasing the illusive but no one had a name for it.

‹ "Divorce" by Andrea Beltran up "Manatee" by Catherine Martin ›