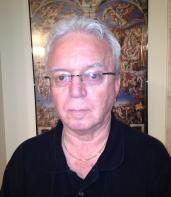 People are like frogs: desperate, lonely, calling out in darkness
and always being answered in a swamp, but at such distance
they don’t know in which direction to turn, and on the chance
they’ll turn in a wrong direction, they’re overwhelmed by stasis.

In the cosmic swamp voices are answered but at distances
so great galaxies blink in and out of existence like fireflies
and to turn in any direction is to be overwhelmed by stasis;
that is, by the illusion that appearance is permanent by design.

The universe is not blinking in and out of existence like a firefly,
or, if it is, it is a firefly about to be snatched out by a frog’s tongue
and everything that appears to be permanent is an illusion by design
in mathematics, to one day end, like a firefly’s light, in total darkness.

If existence is a firefly about to be snatched out by a frog’s tongue
then humanism has reached its nadir begun with the Renaissance:
mathematics may prove time, like a firefly, will blink out in darkness
but can never disprove another existence after what it calls the end.

That humanism since the Renaissance has reached a low point
may be true but it is also irrelevant, and even that article of faith
cannot disprove another existence for what some deny is the end
but a bullet to the forehead confirms for most the end is the end.

Everything is true/untrue, relevant/irrelevant, an article of faith
and a product of humanity’s disbelief that at the core is nothing,
that the end is end, which comes for most like a bullet to the head,
which, in turn, demands disproof, making affirmation possible.

We are the product of humanity’s disbelief; at our core is nothing.
If I have a toothache, it is because I’ve willfully sinned in my teeth.
God’s wrath is severe and, in the end, will be as a bullet to the head:
inevitable, inescapable, unstoppable, indescribable, effectual, and final.

In the ache of the September 11th firefighter finding a tooth is Being,
the human, but not as frog, desperate, alone, calling out in darkness.
In that moment he knows the inevitable, inescapable, unstoppable;
his turning in any direction to hold on to something is Nothingness.