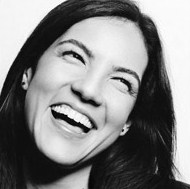 Sloane Crosley is the author of The New York Times bestsellers I Was Told There'd Be Cake, which was a finalist for The Thurber Prize, and How Did You Get This Number. She is also a weekly columnist for The Independent in the UK and editor of The Best American Travel Essays 2011. She lives in Manhattan, where she is a regular contributor to GQ, The New York Times, National Public Radio and the inexplicably vast and varied collection of granolas in her kitchen cabinet.

Superstition Review Editor Britney Gulbrandsen conducted this email interview with Sloan Crosley. She says of the experience, "Through this interview process, Sloane Crosley has quickly become one of my favorite creative nonfiction writers. Her essays are absolutely hilarious. I love the unique ideas she chooses to center her essays around. She is not afraid to say anything, to tell the whole truth, even if it is a bit embarrassing or openly honest. This trait makes for amazing writing. If you have not had the chance to read her essays, go pick up one of her books. You will not regret it. I thoroughly enjoyed the opportunity I had to interview Sloane Crosley. Her work has motivated me to continue to write and work on pieces of my own."

Superstition Review: I am absolutely in love with "The Diorama Diaries" on your website. What an original idea. How do you feel that other forms of art inspire your writing—either your own artistic efforts or others?

Sloane Crosley: I wish I was more directly inspired by other art forms. I have to say that when I see a piece of visual art or hear apiece of music that moves me, I generally want to go and paint a painting and start a band. Unfortunately, I can't draw or play the guitar so I just try to tuck in a corner of my brain and save it for later.

SR: I love the start of "The Beauty of Strangers." You write, "I know it seems like a late start, but I was twenty-two my first time. Like many women in New York, I lost it in the back of a cab. Unlike many, I got it back the next day." Obviously, readers are thinking of virginity, but you are actually referring to your wallet. I found this surprise brilliant and refreshing. Discuss the element of surprise in your writing. Have you ever seen a red panda?

SC: It looks just like a raccoon but is secretly more closely related to an actual panda. Essays and jokes have that kind of relationship, though I realize that devalues the essay format a bit. They look like short stories at the outset but there is something punchline-y about them.

SR: At the beginning of your book I Was Told There'd Be Cake, you write an author's note stating that some of the characters in your book have name changes or feature changes. Explain the difficulty in keeping the truth the truth without harming others.

SC: Well, it's writing not heart surgery. I am not a doctor and as such did not swear on my life to "do no harm." That said, I have to live with myself and I have to live with my portrayal of the past. And so long as I can do that—so long as I feel strongly like I got it, whatever the "it" may be—as correct as I possibly could... that's that. It's funny, sometimes people come away from the essays thinking they are "too nice" and others thinking they were "too mean" but of course I never intended to step on that scale when I started writing them. I just want to make them funny and recognizable to the people who might be kind enough to pick up my books in the first place.

SR: The idea of focusing an essay around toy ponies you collect in your kitchen drawer is so unique. How do you take something so simple and create a full-length essay out of it?

SC: Oh, to be honest I'm not sure. It's hard to articulate why one notion gets extended out as far as I can take it an why another dies on the vine.

SR: In "One Night Bounce" you talk about the misconceptions you had about sex when you were a child. How do you reach back into your memory and pull out so much information about your childhood?

SC: I don't keep diaries or journals. I never have with any regularity except when/if I'm travelling for an extended period of time. I think what people forget with writing is that I'm choosing to do this. So I'm only writing about stories and people and situations that are sharp in my mind.

SR: In "Smell This" you use summary, description, dialogue, an a/b/c/ list, a stage 1-6 analysis, etc. It keeps the story moving. How do you decide to format the material in your essays?

SC: Oh, this is going to be a very disappointing answer because it's almost logistical or visual... basically if an idea lends itself to a chart or bullet points and in a fit of ego I deem this idea just to valuable to edit out, I will generally hunt for other places to use the same format for symmetry's sake. Sometimes it can make the essay. Sort of like the essay is now saddles with some funky little idea I have and instead of getting rid of it, it has to figure out how to work with it to make itself even better.

SR: You write a note to your parents in the dedication of your book How Did You Get This Number. It shows the good relationship you have with them, as well as your sense of humor. Please explain the role that humor plays in your writing, and why you feel that it is important.

SR: You begin How Did You Get This Number with a quote from Willa Cather's short story "Paul's Case." What about this quote inspired you to use it as an epigraph?

SC: This is such a great question at least from a selfish perspective—just because no one ever asks me about that quote. That story is unbelievably beautiful but depressing, which is, to my mind, a state just inches away from unbelievably amusing. How Did You Get This Number, more so than my first book, feels aware of that closeness. The moment of that quote in the story is one of real joy for that character even though it doesn't read like it. Partially because he's a bit of a dark seed and a disturbed kid. But mostly because all he wants is to be a part of the world but step back and watch it simultaneously and he feels like here, finally, in New York, he can do that. I happened to be rereading the story in an anthology—it's like Cathedral or The Lottery in that it gets a lot of anthology play—and it just popped out at me for the reasons I mention.

SR: In How Did You Get This Number you write, "Although subject to impressions and memory, this is a work of nonfiction." Please discuss your feelings on the issues regarding nonfiction and give your best piece of advice for writer's to work around this issue.

SC: Not to be militantly black and white about it, but there is no working around it because there is no issue. Those disclaimers are in there for obvious legal reasons but if you can't tell the difference between refashioning dialogue or a timeline because you're telling a story vs. saying that when you were little you're family moved to Mars and started a theater troop made up of greyhounds, an iguana, and a midget named "Pip"... then maybe book writing is the least of your problems.

SR: I love how you choose to begin each of your essays. I'm immediately hooked. "The Ursula Cookie" begins, "There is a point in most abusive relationships when it occurs to the beaten party that they are guilty of putting their face in the way of someone else's fist." How do you decide how to begin an essay?

SC: Thank you. And I tend to think of the beginnings when I'm sitting down to write. I often have the ending rattling around in my head before. But I try to get to the entry point quickly. You have to just pick a door and go. Otherwise you might never get started.