"Madonna in the Terminal," by Terese Svoboda 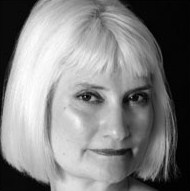 Every Madonna I saw in Florence had her face-egg-oval, skin with the sun inside it, and clear honest eyes only the young manage. A real beauty. Although her boyfriend, a horse reporter, held her every moment except the five minutes (2x) she spent putting on makeup during their allotted two days-every-three-months her mother would let her travel to Pisa to visit him, every time or nearly, they expressed more than love, moving moving moving toward lust, his cell rang with horse news, meaning tips and people wanting this pronto! and he answered it.

This was the gist in battered English she shared with us. No other Italian on the six-trains-in-three-days trip had spoken to us, although often the other passengers seemed to be listening to our conversations, secret translators practicing their skills on our usually plebian exchanges. We didn't mind, we wanted to concentrate on the leaning towers and cypress rows anyway or I did, as I found it too hard to talk and tour at the same time.

Her offer to guide us through the maze of tracks crisscrossing the huge station to the train she also needed cheered us, a touch of hospitality amongst all the brusque, frowning Italians. We didn't mind talking with her again while we waited on the platform she led us to, allowing her more language practice she needed. She had language exams in two months she must pass in order not to be condemned to work in a kindergarten. She hoped to work in a travel agency. How are tourists not like small children? I asked but she found tourist and children too far apart to relate, and did not laugh.

We excused ourselves in turns to see a little of the town, and left our too-large nest of luggage to tour the rail yard's perimeter, myself admiring the pigeons that patrolled the tarmac, my husband buying treats.

On his return, she wouldn't share his biscotti, which should have alerted us. Her age required constant feeding, although her figure did not suggest any unusual habits in this matter, neither anorexic nor roly-poly. She called her boyfriend instead of snacking, or tried to, his line so often busy with horse news and his horsey friends, then she told us about the jockeys she knew while we ate a second biscotti. Jockeys are quite smart, she said, not what you think. Small heads? she said, and tapped her own.

They are always throwing punches, getting their nose bloodied. Nose is plural? she asked.

She painted a Snow White scenario, telling us how she staunched the jockeys' blood, bandaged their wounds. She loved the Pisan horses they raced. Surely they were not the wild-maned galloping Montana version she suggested but the buggy-pulling track nags we passed hours before meeting her. Or was the horse's sensuality part of her crush on a man who wrote about them? She said horses standing in a field left her breathless.

I wandered off with a euro for the toilet, then my husband returned from another tour of the town square with a cup of gelato, and panic. Five minutes to go, and the train still hadn't pulled onto the tracks in front of us. She laughed and said they often came and went quickly but her phone rang just then, and she answered it.

We watched the track, the clock, we went back into the busy central area to check the terminal signboard which flickered. Two trains were leaving together when our ticket said we should, one of them with the proper number but now pulling away two tracks over. We stumbled in that direction as quickly as we could with all our luggage to see the end of the proper train disappear.

She helped me buy our new tickets but I was wary now, I broken-Italianed our itinerary, I counted the change myself. She called her mother and told her we were what caused her delay. That was my sly translation, although I would have done the same myself, given how dumb it was not to sort out the trains. Speechless with travel betrayal, we waited together, the three of us screwed to seats in a row in the waiting room, staring at the departure board or reading until I couldn't stand it anymore.

When I returned with a heavy box of pizza, again she wouldn't take a slice. After I leave him, she said, I never eat.

Then it came to me, why she seemed so dazed. It was love, not her, it was that drug that had betrayed us, the crumbs of which we still fed on.

But she had to go on talking. The jockeys never saved any money, they bought too much jewelry for their girlfriends or their horses, her boyfriend had only studied a year at college and would he report on the horses forever? It was too hard for him to study and write at the same time, never mind pay attention to her. She certainly didn't want children right away although nobody was talking about marriage. Relief is what we felt when she noticed our new seats were separate, another car on the next train.

As soon as it arrived, she gathered us in her arms to kiss us goodbye, her face still so aglow with her Madonna skin I wondered if she had lied to us about their chastity as surely she would to her mother, I wondered if she were pregnant already.

Who was more naïve? She stole an extra several hours from us to practice her English, she was not sorry, I said, between the sheets that night, so cold in the Alps we came to that we touched everywhere, then fell back dazed, despite our age, my husband's own cell at last out of range.

‹ "Mud, If It Were Gold," by Samuel Kolawole up Interviews ›