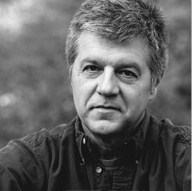 Robert Wrigley's most recent book is Beautiful Country (Penguin, 2010), his eighth collection of poems. A former Guggenheim and two-time NEA Fellow, he and teaches in the graduate writing program at the University of Idaho.

Nuthatch Sitting on a Bear's Nose

Really just a small cast iron representation
of the latter, a bottle opener mounted
to the southeast post of the shack's porch,
a Christmas gift from my niece,
and nothing to be stood upon, not even by a bird,
except for the nugget of ice at the end of the snout
that gives it a place. Some think art is lost
on the beasts of field and forest. Not I.
The chainsaw sculpture of an eagle
I fashioned years ago and fastened to a stump,
was sniffed at at length before the coyote
lifted his leg and joined the ranks of the critical establishment,
and I did not hold his opinion against him.
Also the badly mounted bull moose head
I rescued from a dumpster and hung on the shack's
central pier: I watched with honest sympathy
the day a cow and calf regarded it,
something like puzzlement on their faces.
As for the nuthatch, he seems for some reason
to see this miniature ursine physiognomy
as nothing more than a place to sit
a while and sing his mournful, repetitive song.
Like last summer, when I took my father to see
his brother's grave, and there was a young woman
sitting on the stone and singing, we thought at first.
But then we realized she was talking, speaking, it seemed,
and earnestly, to someone buried the next row back.
I held my father's arm, and he whispered
"Keep on walking," and we did, and the woman
stopped talking until we passed into a part of the cemetery
where no one we had known was and sat on a pair of stones ourselves.
When the breeze came we could no longer hear her
and spoke to each other about the monuments of strangers,
some simple, some gaudy and foolish,
rife with byzantine, insistent symbols, each vault
and coffin containing, my father said, "once stiff just like another."
Then he said, "No, that's probably not true."
Silence, then, just as a moment ago, when I turned
to see the nuthatch had also flown.

Something about the nail through my hand said Jesus. Or was it shit?
No, that was me. The nail-gun, on the other hand,
in the other hand, said nothing, though its compressor wheezed a bit,
and blood fallen into sawdust spread like wine in sand.

Today I say, "Stigmatum hell, that's a nail hole!"
Before I climbed back down the ladder though, I held the safety back
with a pale finger on my impaled left hand and shot a sixteen-penny nail
at a laughing magpie, sarcastic-looking, all white and black.

And missed, of course. Something about pain loves company.
I might have felt even worse if I'd nailed that cackling bird,
but I've come to love the scars held out front of me,
or in and on my hand at least. Jesus and goddammit, yet another word

I yelped, after lopping the pointy two inches off and jerking
the head—and sheared end out with a pliers, then dousing the holes
with isopropyl. Honestly, I'm skilled at working
with such tools as that. I hardly make mistakes at all.

See? It went in here and came out there and didn't even graze
a bone, so I wrapped my paw with gauze and tape and went back out
and got each and every rafter sat and toe-nailed into place,
which, since you asked, is what these scars are all about.

The farrier drops the left hind hoof,
and the gelding snubbed to the gatepost
lets fly his right foreleg straight out

and cracks the kneecap of the man
who, in consideration of the old boy's case
of nerves, or ordinary orneriness,

had stood there all the while the final shoe
was nailed and trimmed, stroking
the long neck and peering into the enormous eye,

and who, though he knew better, had let his mind
wander and didn't see the ears lay back,
but who, by some sixth or seventh horse sense,

a quarter inch, a millisecond, and he would not be
so absurdly hopping there among
the silvered old and new slick droppings,

uttering not the least curse nor horsely condemnation,
and in truth not even thinking of baseballs,
dog food, or hard-earned equine contumely,

since his wife in the nearby shade
of a great black walnut tree stands
stroking her distended pregnant belly,
and because it is, after all, her horse, born
the same day she was twenty-one years before,
the same day the child she carries might

—if what she hopes for comes to pass—
be born himself, a boy she intends if the dates align
to name after them both—Joseph alimp

now through the trodden grasses,
and Burley of the warning, protective nicker—
or no, maybe Jasper, name of the farrier

hand-stenciled and sun-bleached on his truck's door,
a name she suddenly admires
and which she will tell her husband about

later on, as they sit on the porch,
and she nestles the bag of ice over his knee,
and Burley stands at the pasture gate, neighing.