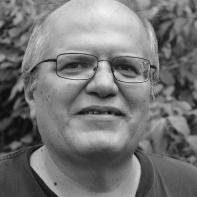 Ray Gonzalez is the author of fifteen books of poetry including Soul Over Lightning (University of Arizona Press, 2014) and the forthcoming Beautiful Wall (BOA Editions, 2015). Other books include The Hawk Temple at Tierra Grande (BOA, 2003 Minnesota Book Award for Poetry), and Turtle Pictures (Arizona, 2001 Minnesota Book Award). His work appeared in Best American Poetry 2014 (Scribners). A native of El Paso, he teaches in the MFA Program at the University of Minnesota in Minneapolis.

I Write a Paragraph I Can't Understand

When I was a boy, all the dirt roads in the desert looked the same. Crescendo and credibility gap, alongside nerve and socket. Forget the sidewalks and quit sobbing in your dreams. Spanish researchers trained people to echolocate with tongue clicks, and biologists found that tiger moths have developed sonar-jamming capabilities to combat bats. Combat bats. It rhymes, though essential could rhyme with pig and nose hair always leads to the question, "Are you truly there, or is this some kind of time wasting device" like the smart phone you refuse to purchase? Outside the out station is where the dog that lived outside disappeared. An octopus has three hearts. If a tiger loses all of its hair, it will still be striped because each cat has unique stripes, like fingerprints, and they will never go away, as in a naked tiger will be striped, though my baldness is growing and I am still waiting for the first stripe. There is a pyramid behind my left ear. I can't talk about it because my ancestors believed in crosses and not brick monuments to heart-stealing mad priests. If intuitivism is prime, then the primigravida is here. A what? A primigravida is a woman who is pregnant for the first time. Perhaps, she is a woman in prime time grabbing new vida (life) to bring into a world where polar ice is melting and the new drug of choice among young people are bath beads that contain chemicals that will get you high, the hallucinations intense because scientists believe plain water's memory only lasts mere picoseconds. I don't know what picoseconds are but the dude getting wiped out on bath beads is the cleanest junkie I have ever seen. This joke over drug addiction isn't funny because as the Arabian and African tectonic plates continue their rift, a new ocean is forming in the Ethiopian desert. Egrets effectuate eidetic epitaphs established each epoch. This is derived from the mystery of time and the imagination that is free to explore inside an old shoe where an old man spit fourteen years ago, the invisible bacteria still alive on the leather casually forming equations that, someday, will lead to uglier feet with beautiful toenails that will become a trend among dying men. Perhaps, the fable of the three-headed dog will finally be believed, though a goat exhibition in India debuted a young goat with six legs, four testicles, and three penises. In the end, I only had four dollars as new species were found among a genus of worms that eat the bones of whales and cows on the seafloor.

Roberto Bolano puts the word "burn" and Fernando Pessoa makes a face, then connects "renounce" to Bolano's. He uses all seven letters and adds an extra 50 points to his score. Bolano stares at the board, then spells "carp." Pessoa adjusts his eyeglasses and looks at Bolano. He places "portion." Bolano is eighty points behind Pessoa and is upset. He is not used to losing at Scrabble and this is the first time he has played with Pessoa, a ghost he has carried in his back pocket for years. Pessoa waits patiently for the young man's next word, which is "tip." "Tip?" Pessoa asks in a quiet voice. Bolano sits back in his chair, sweat starting to run down his forehead. "Yes, tip." Pessoa removes his black hat, "What is the meaning of tip?" Bolano rises to his feet, his long hair falling over his face. "You are asking for the meaning of tip?" "Yes," Pessoa says. Bolano shuffles the remaining letters in the cardboard box and sits back down. "I don't have a definition for the word tip," he admits. "Tip of the world? Leave a tip for the poor waiter? The tip of your penis?" Bolano stops as Pessoa's white hand sets "tiger" on the board. "Tiger?" Bolano asks. Pessoa nods, then looks over his shoulder as they hear a knock at the door. "It must be Borges," Pessoa says. "What?" Bolano opens the door. There is no one there. He comes back to his chair. "Why did you think it was Borges?" Bolano asks. Pessoa shakes his head without a word. Roberto Bolano and Fernando Pessoa play Scrabble for the first time in literary history, two writers with their blocks of letters and their competitive banter. Bolano's best words are "mission," "friend," "heart," and "llama." Pessoa wins the game by 168 points, words like "enter," "situation," "believe" and "since" sending him to victory. Pessoa's shakes hands with Bolano, who can't sleep that night and stares at the dark walls of his room as he lies in bed. "The tip of the tiger," he whispers to himself.

The Destroyer of Compasses
after Julio Cortazar

The destroyer of compasses is my brother. He lies in the wet fields of war and dies young, his spirit rising above the soil to be trapped in the great books that tell a different story because magnetic north has been demolished, the master of compasses witnessing the coffin and flag draped with the glory of the weeping mothers and the lying generals that perform without the four directions turning their sweat to blood. The destroyer of compasses is my brother. He eats the same meal as I, though the bird of migration is set in its cage and cannot flee, its shriek waking the young and resolving the old. When the bird is eaten, the boy takes its compass apart, hiding the magnetic needle in his left ear, leaving the blazing feathers behind. He follows the vibration to the south where his family emerges wrapped in robes the savage priest left behind. The destroyer of compasses wants to be my brother, but I am too old to give advice, the glass on the compass touched by our father who doubted its magic-the devices of love and death hidden in the shoes of the stone men who refuse to be shown direction and drink the mud of their angry sons, the loyal followers, and the boys who insist they must defend the earth from its barren kind. The destroyer of compasses is my brother. He flies, lifting the sorrow of lies beyond the broken fields of rock where the compass refuses to point, its frenzy the dance in the engine of the heart, the compass the last circle spinning wildly before the young man finds out where he is bound.

He walks to the other side of the room where two bare feet wait by the sofa. The toes move slightly as he approaches, but he hasn't recognized the ankles yet. He knows bare feet can be friendly or the worst enemies a quiet man can have. If the toenails are long and dirty, there is no chance. If they are trimmed and healthy, something will happen. He stands in front of the sofa and looks down at the waiting feet. The right toe curls a bit, then gets stiff in attention. The left toes suddenly point upward, then relax. If the room wasn't so dark, he could find out who the feet belong to. They don't look like a man's and might be a woman's, though the nails are not painted. He can't see above the ankles as if a pair of pants or long skirt are hiding the legs. He can't make out any sitting figure and wonders if it was difficult to get here barefoot, or if there are shoes hiding somewhere under the sofa. Did these feet think on their own and part ways with their owner? He fights the urge to bend down and kiss each ankle.