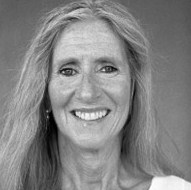 Pamela Uschuk is the author of five books of poems: Finding Peaches In The Desert, One Legged Dancer, Scattered Risks, Without The Comfort of Stars: New and Selected Poems (2007 Sampark Press, New Delhi and London), and, her latest, Crazy Love (Wings Press). Uschuk's work has been translated into nearly a dozen languages and it has appeared in over three hundred journals and anthologies worldwide, including Poetry, Parnassus Review, Agni Review, Ploughshares, New Millenium and Pequod. A Professor of Creative Writing at Fort Lewis College, Uschuk also teaches screen writing and environmental literature. Uschuk spent many years traveling to teach creative writing to Native American students on the Salish, Sioux, Assiniboine, Northern Cheyenne, Blackfeet, Crow, Tohono Oodham and Yaqui reservations in Montana and Arizona. Editor-In-Chief of the literary magazine, Cutthroat, A Journal of the Arts, Uschuk lives in Bayfield, Colorado.

At the Ouray Vapor Caves

Persephone, too, shudders at disrobing
when aspen leaves freeze, just before opening
the slimey door to the underworld.
Clammy as a wet towel, the air exhales
fatal black mold and sulfur
across the ceiling of the spa shower
despite aromatic eucalyptus and cedar
smoldering in sconces near the message.

Your skin registers first the ecstatic scrim
that laces her fear, jittery as a salamander,
as she begins to read earth's scald
with her fingertips, descending
through granite the color of a scalp wound
striped with aging hair, descending
through milky quartz,
through the stone heart of a mountain
rising a mile, then more above her.

The antechamber is dim, so steamy
that eyes film and fingertips lose their grip.
This is the realm of water gods
cascading across smooth mineral buttocks,
hollowing the mountain into their own drum
keeping time to a constant drip. She readies.

This is nothing compared to the crush
of dark heat that pushes against
the door of her terror she cracks
in spite of this abduction
from her mother, who is left
to her fury, to scream then
turn earth blind as ice.

My love and I enter the far grotto
together, slick as vulva
or oiled nipples, heat-woozed, the only
couple inside this giant geode
radiating haze above a broiling pool
droozed black as stamens inside a poppy.
We dip in our hands, our feet,
watch them become their own ghosts.

Stalagmites rise around us sluggish
as glaciers, the steady
pop of droplets from
stalactites like wet stone beards
we stroke with numb fingers

while we breathe our own stacatto
heart beats, regretting those bursts
of desire too often lost to laundry, stacks
of unpaid bills multiplying on the counter,

lost to the stale air of offices and memos
collapsing our lungs.

It is then we relearn speech, purring
words that reverberate deep
as the throat thrums of Tibetan monks
or the keening of sperm whales across
distances as vast as the spaces between stars
in Alpha Centuri, yearning as old
as the moan of Pluto when he finally lifts
Persephone's smooth chin to his eternal loneliness.

Dumb with sweat, we hum across
the cave to one another, long vowels
clanging against sorrow, like vows taken
long ago in the belly of earth, while
Persephone opens
wholly to what is inscribed
on dark bedrock oozing heat.

The full moon eats the screams of magpies,
dawn-colored jays ratcheting away
atop soggy lawn furniture even though the moon's developed
new facial cracks and has lost more mass
on its way to total disappearance in another million years. Still
I am grateful to see its bright
white appetite as it flies invisible as the handkerchief
of my grandma's ghost while sunrise claims this world.
Yesterday I thought I was going blind, fragile
retina blown apart or aqueous humor
squeezed by a fatal tumor from my eyeball's global field.
Etched somewhere inside my sight,
a phantom yellow bulb or spectral solar
paramecium shimmied through my cornea.
Neither sleep nor eye drops erased the indelible proof
of melanoma, of fear's nickel-plated
electricity murdering what I envision.
Why do I always feel I deserve disaster?
After a battery of tests, stinging
drops, finger pokes, laser white
lights digging at the back of my eyes,
the doctor says everything is fine.
The floater still burns and leaps
just out of range. I'll carry it through
the afternoon's bureaucracy, the endless
back to school meetings, but I would rather be that magpie
yelling at the uncooperative sky or a jay
braying against the full moon
it can no longer see.

Michigan was flat as my chest,
the Lookingglass River so lucid that even at seven
I could read its slow tannic thoughts.
At seven, I knew I'd fallen into the upside-down heart
of a world always saying goodbye.

After last night's dust storm that slashed nuthatches
from trees and flung all the solar lamps around the gravel yard,
the sky is unapologetic, sees all
regret wriggling like meal worms under its scoured lens.
Must everything today lean over its reflection like a heron
mesmerized by the pond of its own loss?
Mountains rip wind through grief, sing
the way a saw sings as it chews through spruce.

At ten I watched a tornado
harrow a trench straight down the road to our farmhouse,
while my father stood in the kitchen door. He sent me
to huddle with spiders, my brother & sisters, and Mom,
the only one screaming down the stone ribs of the basement until it was clear.
I could have run, then, into the shriek of wind
and pulled out its tongue, strangled the syllables of fear
spitting shrapnel into my mother who would dervish into a mental ward
before the next week, but my father blocked the door.
More guts than brains, he said of me.

Grandma said wildflowers can't be transplanted.
She wanted to die in her own house.
All I wanted was for her to laugh
beyond my own life line. It took me twenty years
to visit her grave, and when I rubbed my hand
over the mound, a sweat bee stung my palm.

Where do they come from—
those gales that whip branches out of our hands
like the faces of those we love
who won't stay in place? How do we
begin to untangle the snarled hair of goodbye?

Regarding Volcanoes and Scalpels

Driving across the Rez to home, the shattered
cores of ancient volcanoes accuse distant rain that
evaporates before it can save dry earth. One resembles
a woman head thrown back, wailing down the mute sky.
Where is love and why would he button up his shirt
of gray wind, turn up the sleeves of his solitude,
pull grease through his beautiful braids only to leave?
Her cries vanish like vultures
who snatch beaks full of dead rabbit
scoured by dust and the slow grind of earth
through stars who never forget their names.
In the time it takes to slam the door on heartache,
the woman is calm as a monk, face recued East,
sunblazed, chin lifted, hair cascading sonorous
as a sandstone river or an avalanche stopped
mid-crash all the way down her back. In either case,
she is alone with the weather who fashioned her
from an imagination larger than time, alone, that is, but for
the red-tail hawk circling the crown of her decisions
and four slick-billed ravens ripping
fresh-struck rabbit from berm. Last night
I dreamed of volcanoes, of saving the tribe
as I led children from the crocodile earth, cracking under our feet.
Lava the color of a fiery wound crowned high
above date palms telling the ancient truth
that rattled too high for our broken tympanum to hear.
Driving through mirages spilling their guts across asphalt,
I think of a friend whose violin bursts for love
to save her from her own fists punishing the floor
that betrays her. Fire her grief that consumes
the innocuous arms that would comfort her, consumes furious
air above her fingers that crackle out the prosody of longing
on Isaye's mad chords. The skin of her flexed wrist
fits close over mine. What tempers the scalpel that dissects
its own anguish in desire's fickle lab tray? Nothing
saves me but this highway cut through a desert where old volcanoes
remake themselves according to angles of rainlight and wind,
to sky's blue illusion so wide it might swallow our breath.

Oh, body of poems like an uncut bouquet of camas taller than our heads, pungent as grizzly sweat, that witnesses our metaphoric picnic, our aortic toasts to stars rewriting themselves each night while we dream. Oh, body of poems unwinding the stories of old women's bare feet walking through corn pollen and banana leaves, through fields of sugar cane scythed by peasants whose tongues have been cut out by tyrants, poems scouring the blood of Afghani mothers from blasted brick streets. Oh, body of poems holding out its washcloths to cool the foreheads of soldiers blistering on the streets of Baghdad, poems holding out cups of honeyed milk to children starving in Darfur sand, poems leaping with their hearts into rivers runoff swollen and drowning their own banks. Oh, body of poems laughing at the spittle of dogs with their heads thrown out of car windows on a freeway littered with Milk Bones and torn socks. Oh, body of poems that for this month, have thrown their arms around each others' shoulders, like war veterans marching in Washington and Moscow and Santiago and Tehran and Jerusalem for peace. Oh, body of metaphors rattling wrist bones like jewelry in the plazas of memory. Oh, body of metaphors drinking coffee in a cafe sweetened by plum blossoms Oh, body of friends growing new leaves on the same struggling tree.