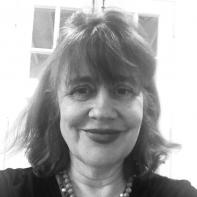 Sheila Black is the author of four poetry collections, most recently Iron, Ardent (Educe Press, 2017). She is a co-editor of Beauty is a Verb: The New Poetry of Disability (Cinco Puntos Press, 2011). Her poems have appeared in Poetry, The Birmingham Review, The New York Times and other places. She currently divides her time between San Antonio, TX, and Washington, D.C., where she works at AWP.

For the show there was Hamlet and
John Dufresne and you, painting
on the backs of doors, on the pieces of
the dismantled organ from down the street,
And that guy—he was just
a janitor from a nearby basement,
carrying a hollow cardboard
tube. No one knew what to do

with him. We offered to buy him a beer or
a vodka-and-tonic, but he said he
didn't drink. Not anymore. And I am
passing over the stories within
stories: Lynn the red-headed bar-
tender, who said you were the kind
of guy she might kiss and forget in
the morning. And I always thought
you did kiss her, in the black-painted
bathroom, grimed glass, silver-
scarred letters, couples that didn't make it,
some girl calling some other girl

"You slag whore." And a bar like that
can be a secret world, always nightfall,
whenever you enter, the clock on
the wall never reading precisely right,
so that we, too, felt, we might stretch
out into some other space
or time. Up all night, feeling the burn of
our throats, faces painted and
repainted by passing cars. He held
the tube right up close. There is no
simple way to help this story escape.
It lives in the tunnel which smells of paper.

When the show was going up, Lynn
cleared off the bar. And he pulled out
the reams of crackling draftsman
paper, translucent, chequered
with sky-blue lines.

Wen Kroy, he said, was where we lived
now and forever, alongside this city,
the one where his daughter died, hit by

a yellow cab. The streets moving
in reverse direction, the buildings even, the
same, but subtly rearranged. He had only
reached as far as East 7th, rising up
from the Hudson, block at a time. Eternity
to trace the span of the bridges, the slow
ooze of the polluted waters, which, too,
flowed in the opposite direction—a kind of
mirror, bizarre, incandescent.

The bar time did not change. The walls
did not resolve into any other shape, much as I
wished it. And in our tenement a hundred
blocks north, the painting count kept
rising—battered wood and stray bits of
canvas, cardboard squares propped
against walls, covering floors. Base
pigment. Red. Yellow. Blue. Cars and
streetlights—what rushes up
and through. Your madness like a reflection

in the simple knife used to slice
bread, the ordinary-the way it shimmers
uncontrollable at the edge of
perception. And I didn't love you. I
didn't love you anymore.