"Who the Hell Does He Think He Is?" by Rich Ives 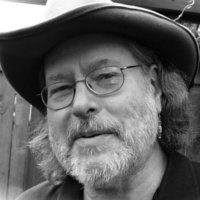 Rich Ives has received grants and awards from the National Endowment for the Arts, Artist Trust, Seattle Arts Commission and the Coordinating Council of Literary Magazines for his work in poetry, fiction, editing, publishing, translation and photography. His writing has appeared in Verse, North American Review, Massachusetts Review, Northwest Review, Quarterly West, Iowa Review, Poetry Northwest, Virginia Quarterly Review, Fiction Daily, and many more. In 2010 he has been a finalist in fiction at Black Warrior Review and Mississippi Review and in poetry at Cloudbank and Mississippi Review.

Who the Hell Does He Think He Is?

The edge of the axe is fat and blue. It hurts more like that. The woodsman has been pursuing fleeing oranges since noon. He isn't a short man. Don't give him any blueberries.

O, O, O but the pain is so entirely terrestrial.

You see, I was talking to Mildred the other day and she told me I should invest in sharpeners. She told me I was under-represented. So I represented her good. Right in the dark forest with the woodsman still pursuing oranges.

But don't give him anything, okay?

Slick eyes and dusty fat. That's what it means to those of us who grew up with the slimy bugger.

I don't know if this is the time to tell you, but old people have been growing faint. I guess the woodsman's enduring innocence frightens them. They retreat into their departing lives. Become under-represented. Acquire small unhealthy pets and godparents and cigarette burns and annoy people with them. Live in a couple of narrow rooms with green ceilings.

Because the trees are not as frightened as you might think.

Because the fleeing oranges have been escaping for centuries. Because the edge of the axe is so fat and blue.

You find a cool black sack of delight strapped to your first night. You know she released you. You know the reasons are beyond her and you still want to confess. "A runny-assed snicker of a woman," the man at the club had said. And then he scratched at the rooster-red welt on his nose. "Sorter disCUSSin' init?" He paused for effect. The effect was not the one he expected.

"My wrists are prescribed," means, "I've heard the knife-like rumours," and, "The calcium flute," means, "The pulse of myself is on her fingers."

"Scrub trees litter the hillside," means, "I place my erection in the sleeve of my trousers."

But no picture of this world would be complete if we did not step back and take a closer look at our place in it. I have discovered that the whispering behind the throat of a gnat never falters because night doesn't fall, it rises. It enters from the back side.

It's there because I want to tell you what I saw, which is not the same thing at all.

If God leaves evidence, does that make him an animal? For some reasons I don't understand, this makes me happy

. . . and if in love we find a second death beyond the little one of orgasm, there remains only one address.

The absence anticipated intensifies. We know this, but have we found the absence that erases the subjective, even if the bodies remain. . .

. . . and then we go and find getting there from the arrival one long retreat, the birth of our death inside that passing, which held all the rewards we found escaping . . .

I learned who I was during the gentle part of the interrogation. I'd been daisied over the lift and curve and the best of it is saying no while the foreign sparrow of trust (grown comfortable beneath the eaves, where infinity begins) darts my return with falling swoops and cuffs.

I'm so crowded I'm sleeping between me. To others, I've been condescended.

I can no longer give myself, my hopeless humplebus of comforting fears better roasted and brushed wide of the day before thought winks out into limpid have-tos of not, its yellow butler of sweetmeat curled homewards.

Should this then in my milk-damp paws await, a cabbage cart of latency reservations ulcered out of duty, I might saturate and remark upon the remarks allowed during my traitoring. I've encouraged the smile of again and I've hidden the rewards of been there and I've turned the singulars to plurals in the instance. (As your thought undresses, you must confess your intentions for its future, hold it apart as if you had no controllable claim to how it might respond to you, what with the tension and the carping. You have to give it back and you have to take it away, all in a single motion filled with reconsiderations.)

Because I don't know what I'm talking about, I might be telling the truth.

And they know who did it.

The frogs and rabbits were walking on stilts. You would have said they were overabundant, but they didn't think so. Imagine if you had never walked upright on two legs and then you did it and did it.

But the coyotes were holding their bellies and rolling on the ground. They perceived rigidity as an error, patient progress as something less than ambulatory mastery. "Let's buy them some training wheels. Let's soften the fall zone."

A meadow's a meadow and a marsh is a marsh. You won't get away with combining them to avoid noticing the limited achievements. But a ranch with both a marsh and a meadow may be a suitable location for a certain type of devious individualist. The kind that breeds freely and likes to watch espionage films. No real armor in his defenses at all, but a tangible lazy "want" barrier.

Your diary never mentioned it.

The hired man with the tire iron never mentioned it.

And the migratory turtles, the real ones, where were they while the impersonations were going on at the misplaced production facility?

It's true. A flagged daffodil of light was destined to escape the stilt parade. You tried disturbing the universe, but it got to you first. The frogs and rabbits were too busy to notice.

It appeared rather dignified, actually, but am I to understand that in certain instances a relocated factory has been known to merely change its representation of the product in order to evade philosophical implications? Imagine if you had never and then you did.

Imagine the surprises in it so close together you would think there was only one. Elevated artificially. Superior to your own autobiographical rewards. Holding on to its belly and rolling on the ground like an accomplishment.

Forever and today in the far far west, there appeared a surly wide hedgehog of a man. He was known far and wider for his heroic hair and predictable accomplishments. A large breathy mound of them.

And humble? You couldn't begin to. You could barely. But you could lavish praise and he'd answer, "Yes, I have breathed some fortunate air."

In those days there was always another small town hurting. And when the long day tried invading the wound, the wound tried to cause a neighborhood. Times like this, he'd often instigate a blowout in the dressing room, hitch up his saturated stinkpants and hero the tall tale of his misfortune right on into a healthy glob of excessive sympathetic teetering.

A couple more invasions of privacy and the perspective ripens. Some tall fella named "Fella" was seen deliberating delight out near the highway where the porch mingles with the sagebrush. There's those that say he fathered a couple of itinerant ethnologists.

Yes, the heroine's here and already very married. Her husband, Mr. Apples, spiders her silly adventure door with a hugely sprawling kiss. He used to limit that kind of thinking to egg-shaped candles.

Finally, his desirable breasts arrived. Fortunately, they were not as big as hers and they were able to stay together like twins.

Perhaps the real situation's over already, but there's always a party afterwards. Mr. Apples knows that.

Eventually the affectionate dogs will be taught to stop chewing on the legs of our trusted companions and some contemporary Tonto investigating the oil lease will challenge them with timeless aphorisms and modern contractual exclusions.

You'll have to decide when they leave. There's always a pink baby-bottom morning of promise and generous bird-food allowances laced with a rich enchanting smell of diapers and burnt toast. Truth is it was one of the situations in which irony didn't count, and the hero had already been voted most likely to be serious.

Which made him funnier.

Which made him more serious.