"What I Wouldn't Do" by Dina Guidubaldi 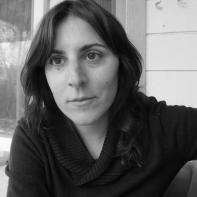 Dina Guidubaldi is a graduate of Texas State's MFA program. She lives in Austin, Texas. Her fiction has been published in several magazines including Other Voices, the Santa Monica Review, Ninth Letter, and Prairie Schooner. She was an editor and reader for American Short Fiction and Callaloo, as well as a columnist for the Austin-American Statesman.

What I Wouldn't Do

I wanted to love you better so I bought you a city. It was small but shaped like your fingerprint, with a mansion for you in the middle of the whorl. It was hard to find, your mansion, but since I'd mapped it, troweled cement for the foundation, chopped logs for the beams, hammered and nailed and sanded until my hands fell off, lugged stones in a canvas sling with my teeth when they did, hung tapestries and draped velvet, since I did all of that, I had a pretty good idea where it was. I landscaped your rose garden and made your maze. I scissorhanded some topiaries for you in the shape of hearts and souls and kept up with their maintenance too; I was on a tight schedule and you were my hours and my half-pasts.

Still, when I built the moat you protested. No fish, you said, please don't bring any fish into this. Just some koi, I promised, just a few carp. No floating lilies then, you said with your elbows out, everything doesn't have to be so goddamned picturesque. You complained when I dug the trench and piped in the spring water, your voice full of needles and hand sanitizer.

But I won you back by getting the baker to bring you bagels and the fisherman to cure you some lox and the farmer to poach some eggs and the gardener to brine some capers for you. I planted a coffee plantation outside your bedroom window so you could wake up fresh, without jonesing for a cup—the early air would rouse you just like that.

It's not like you're a prisoner here, I said. You're free to walk out of your turret room and down the spiral staircase and through the antechamber and into the foyer and out the front door and past the rosemary and lavender bushes and into the hedge maze and down the cobblestoned circular streets and out into the world.

Well, you said, that sure sounds free. You went down into the kitchen and banged some brand new copper skillets around and frightened the cooks and flattened the soufflès that were sleeping like babies in the oven.

But you got better. You settled into your featherbed and read some Yeats or Keats and snapped out of it. Next thing I knew you'd found me in the main road where I was bartering for a basket of eggs with the farmer, whom I'd paid to pretend to barter with me. You hugged me around the waist while still in your nightgown, and I was happy you'd grown so comfortable. Your feet were bare and thank god there were no cars or insectine Vespas in your city; we were standing in the middle of the street in a melodramatic embrace for what seemed like hours. You took the basket of eggs and invited the farmer and his chickens home with us and we bought three bottles of bad wine (too sweet, the grapes hadn't been cut back and shocked enough, and you thought there was a metaphor in that) from your vineyard on the way back.

I told him you were worth the world and he sat back in your teak Adirondack chair on your wrap—around porch on top of your manmade hill and stared at us. The world? Do you think any one person can really mean that much?

That much and more, I said. I told him you were my country, my nation, my home, and I wanted to give you at least a city in return.

You were buffing your nails to a ridiculous shine and sighed. I'm just me, you said, I'm not all that. But I thought you looked pleased.

A lone star came out and unfortunately we all had to share it. I gave you my third and wished upon your tightly closed eyelids instead.

The night ended with all of us smiling the same purple smiles and thinking our own thoughts, thoughts too snaggled to share.

When winter came—I had no control over the weather but you insisted you liked it that way—you fell ill and I had to sit by your bedside. I read you a children's picture book about a poor man who sits by a princess' bedside and waits for her to wake up, and when eventually she does, they live forever. I willed the sun to come into the room and warm you, but it didn't. So I had an elaborate system of lights and bellows set up outside your window. Your coffee plantation got trampled in the process but it just made the smell stronger, as if we were living inside a morning.

You got a little better.

All bundled up, we went out into the city in a sleigh led by horses that I'd had surgically implanted to be unicorns. The one on the left had developed an abscess around the horn and it smelled bad, so I switched you seats. We doled out presents to the people lining the streets—fake furs and semiprecious stones and toys made of polished wood and tiny scapes of the city itself. We met the baker, the fisherman, the gardener, the farmer. They all winked at you and waved.

Why are they looking at you like that, I asked. Don't they seem a little conspiratorial?

Maybe they hear me singing at night, you said.

You sing at night? What do you sing? The horse with the inflamed horn scratched it off on a tree and your answer got lost among the resultant blood and gauze.

When it was almost spring you said, We've been together for ages, it seems.

I couldn't say yes or no about this. It did seem like a long time, sometimes—just look how long the city took to build, and then multiply that by a million—but sometimes, too, the wind blew back a little or the day seemed unusually crisp, and I felt like I'd never met you in my life.

Like what? What part do you like? You'd taken up Dunhills again and the smoke curled into a question mark.

There is no all of it, you said, but I talked you into coming outside and we picked an edible bouquet for the cook, who had run out of recipes and was frustrated with all the weird salads you'd been demanding because of some new diet you'd read about.

The farmer stopped by with more of his endless eggs and talked about how they did it somewhere else. They barely even cook them, he said, leaning comfortably against a counter in your kitchen. See how the yolk goes all golden over the romaine? And anchovies? The kind without bones? That's how they do it over there.

Where's over there, you asked, chewing some water in celery form and staring out the bay window as if it had just appeared in the wall, as if it were magic.

In summer we hung around the moat, and most days you wore clothes but I didn't. Come swim, I'd say, but you were working on your tan. I'd planted three hundred pearls in oysters down there for you to find but you never even ventured in. All slimy, you said. And it was true—the water seemed thicker and the koi had developed ick. I made a little bamboo gate and tried to corral them as they poured through, so I could paint each one with a medicated eyedropper. I felt dizzy from the flashing fish and the heat and the incessant salads I kept eating in your honor.

Jesus, you said, layering thin slices of cucumber on your eyes as if you were a salad now, too. Go order a pizza. Go back to work. Do what you need to do.

I stared at the tiny eyedropper, at the tainted fish, at my reflection in the murk. This is what I need to do, I said. The fish looked nervously skyward.

I glanced up at you then, and the sun stung my eyes like a great lemon. I winced, and your outline dissolved into the chaise.

Well, you sighed, ringing the bell for the butler and another cold sakè, do something else, then.

And so every night that summer we wound up drunk by nine. I'd wake at three a.m. to an empty bed or couch or floor or closet, and this randomness, somehow, helped me get back to sleep.

Often, though, I'd get fixated on a thing of yours so small only I could see it—a twisted hair in the bathroom, a sharp toenail paring as it stabbed me en route to the bed, a skinny footprint in the red clay at the tennis courts you never used, a silvered sliver of your profile when you weren't looking, when you weren't even there—and I'd think what an amazing city I'd built after all. My love, I thought, deserves to be in books, deserves to be read about by bedside.

Fall came with apples and pies and mushrooms and gravied casseroles. You were nowhere to be found.

She's to be found at the farmer's, the cook said.

She's really into those eggs, I said, looking at bills and then ripping them in halves.

Don't talk to me about eggs, the cook said, you know better.

I smiled on the outside.

By winter you and the farmer had moved to New York. You wanted to dabble in the performance arts, in interpretive dance, a desire which in some ways hurt much more than the fact of the farmer. Without you, the city emptied out. I couldn't afford to pay anyone. The workers went on to Disney World, to big game preserves in Kenya, to the circus, to hang frames in art spaces. I stayed. I stayed, of course, and realized that all along, this whole time, I'd been building us your city for me.

And when I found out you and the farmer had had a child, I didn't wonder for too long whether or not it was mine. That said, upon receiving its photo and stats on a pink-bunnied card, I got out my super-laser halogen microscope and zoomed in nice and tight on its fingerprint.