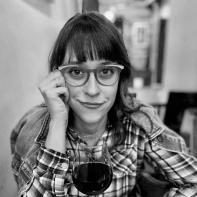 Rochelle Hurt is the author of In Which I Play the Runaway (Barrow Street, 2016), which won the Barrow Street Poetry Prize, and The Rusted City: A Novel in Poems (White Pine, 2014). She's been awarded prizes and fellowships from Crab Orchard Review, Arts & Letters, Hunger Mountain, Poetry International, Vermont Studio Center, Jentel, and Yaddo. She lives in Orlando and teaches in the MFA program at the University of Central Florida.

from A History of The Rusted City

In the Century of Birthmarks

parents held their newborns
up to the sun and read the shadows
cast through them like runes.

They found tableaus in blood—
lives to come sketched in blue lines
along the arms and thighs.

But if their veins sang of ruin,
babies were marked with anklets
to tell each doom apart:

In the Century of Lunch Pails

that listened as coverlets of wind, cut
from the sky, dropped through them.

Everywhere the chew of pipes branching
through copper soil could be heard.

Everywhere the groan and whistle of liquid
aluminum, churning the river to a radiant loam.

Everywhere the whisper ticks of fingers,
every hand a clock. And every evening,

the clinking, ever nearer the doorstep, of coins
inside all the hollowed out fathers as they walked.

In the Century of Mandatory Crying

it was decreed that the solution
to dirty water was a salt washout—
a man-made flood. Just one
half hour daily for the average citizen.

But mothers whose children admitted
to panning the river for secrets, leaving
beads of quicksilver in their wake,
were expected to weep through entire days—

wet spots on the fresh bed sheets,
salt stains on the polished mantle,
little drops on the dinner filets.

In the Century of Rust

the city's shoulders glittered with fiery dust.
Dramatic, wind-driven, it cloaked every citizen,
and found its way into each
of the body's hollows.

It fell from their mouths in scabs
when they sang too loud, yawned too long
or sighed too heavily. It left

iron orange streaks on their tongues
when they kissed, so it was always apparent
when two had been kissing. They had to

from rusting out—that stuff,
mothers would say to one another,
will eat through anything.