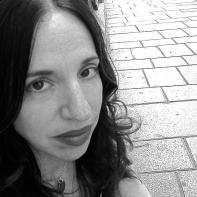 Susan Steinberg is the author of the story collections Spectacle, Hydroplane, and The End of Free Love. Her stories have appeared in McSweeney's, Conjunctions, The Gettysburg Review, American Short Fiction, and elsewhere, and she has been the recipient of a a United States Artist Fellowship, the Pushcart Prize, and a National Magazine Award. She earned a BFA in Painting from the Maryland Institute College of Art and an MFA in English from The University of Massachusetts, Amherst. She is Professor of English at the University of San Francisco.

This interview was conducted through email by Interview Editor April Hanks. She said of the process, “Susan writes unique and engaging pieces of experimental literature. I was intrigued by her use of form and nonlinear plots, so it was a great experience to be able to discuss these elements with her.” This interview covers her background as a painter, her thoughts on experimental writing, and common themes in her work.

Superstition Review: In a recent interview with Publishers Weekly, you discussed your history as a painter. How did you get into writing? In what ways does your experience with painting influence your writing?

Susan Steinberg: I started writing to keep working while my paintings were drying. I always had a lot of energy after painting, and there was a lot more I wanted to say. I wrote in spiral notebooks, mostly about things I was angry about, and these writings, eventually, much later, became stories

And my experience with painting completely influences my writing—in every way. The two processes are very similar for me. In both, I work on several pieces at once; I put a lot on the page/paper, then pare down; and I always think about the possibilities of form.

SR: The End of Free Love separates the stories into six sections. At what point during the editing process did you decide to do this and what considerations did you make when dividing the stories?

SS: I decided on the sections after all of the stories were written. There seemed to be some sort of emotional chronology in the pieces, and I wanted to try to trace that from beginning to end. It's imperfect, of course.

SR: You have published many stories in literary magazines. What is that process like and how is it different from publishing a collection of short stories?

SS: I really like publishing individual stories in journals. It gives the work another life and allows the writer to see it in a different context, alongside work by other writers. I felt the same way about showing my paintings in group art exhibits.

SR: Several of the pieces in The End of Free Love and Spectacle were published independently before being put in the collection. What is the editing process like for a piece that has already been published elsewhere?

SS: Editing a collection, even if the stories were heavily edited for journals, is often about editing heavily all over again. You just have to be all right with older, often very different, versions of the work being in the world.

SS: There are a lot of ways to approach this question. But I'll just say that aspects of life are fragmented and surprising and jarring and traumatic and impractical, and, as my work certainly calls upon such moments, I can't come up with a good reason for presenting it according to a linear formula, one I think we all know well.

SS: 1) A cafe in the Mission in San Francisco. Sunday. 8am. Dim lighting. Country music. Across the table is the poet Randall Mann. 2) My desk at home. On the desk are post-its, a calendar, an empty glass, a textbook for a French class I took, a pencil sharpener, a cigar box filled with pencils, a stone, and a lamp.

SR: “Cowboys” was awarded the Pushcart Prize and is arguably your most well-known piece. What about “Cowboys” do you think makes it stand out?

SS: Perhaps there's a certain brutality that makes it stand out. I mean perhaps it's a bit relentless.

SR: In “Cowboys,” the protagonist deals with the impending death of her father. The use of humor in the face of a difficult situation felt very realistic to me. How did you decide to use humor to describe the events of the father's death?

SS: I never really decided to use humor. What I mean is, it wasn't a conscious decision. In fact, I'm always surprised when people laugh during my readings. I'm always thinking, this isn't supposed to be funny. But I think it has more to do with the narrator's delivery or timing of things. I mean, I'm just not sure these funny moments would read as funny if taken out of the context of the story. But in contrast to the more painful moments, I suppose they offer a bit of light. And certain words, like “dumbass,” are just naturally funny I guess.

SR: Many of your stories are not in chronological order. For example, “Cowboys” combines the protagonist's one-night stands, her childhood experiences with her father, and the night of her father's death. How does this timeline influence character development in your stories?

SS: I suppose this is another thing I do—writing nonlinearly—that is without a conscious agenda. In other words, the nonlinearity is first about the process of writing (thoughts come to me in this way) and next about the building of story, though I guess that is directly related to learning about who the character is. But, again, it's not planned.

SR: Several of the pieces in Spectacle are variations of the same story. For example, “Spectacle” and “Supernova” are about the same event, but portray it in a different way. Did you write these pieces concurrently? What led you to write the same story in multiple ways?

SS: I often write a story, and that story raises questions that need to be answered by another story. And so I write that one as well, and there's a subtle link between the two. But in this collection, I wanted to more aggressively repeat certain stories that I thought needed to be told twice, from different perspectives—and this felt like a big risk.

SS: My work is generally about female identity, and I think it's important to call upon where some of my narrators'—and my—thinking about it originated. Or what informed it. This often brings me to family and relationships that are very complicated.

SR: One of my favorite stories from The End of Free Love was “Winner.” This story is a series of wedding toasts, where each narrator sheds new light on the story. In what ways does the narrator influence a story and how do you decide on the voice you will use for a piece?

SS: I generally write first person narratives, but in this story, I was interested in writing a series of voices that told the fraught story of the voiceless bride and groom. This form was a departure for me, and it was inspired by a wedding I attended, a speech that nearly went too far. It was riveting, yet terrifying. And in my story, I wanted to push it even closer to that place where we tend not to go.

SS: Writing and the teaching of writing are linked for me. As someone who practices writing, I can bring my experiences with it to my students. And my students are constantly teaching me new things about writing. I also like having an ongoing conversation about writing with an ever-growing and dynamic community of writers.

SR: You have researched and discussed the representation of women in the literary world. How do you think the gender disparity in literary arts affects women writers, including yourself?

SS: It's a fact that fewer women than men are getting their work published in literary journals and magazines, and fewer women than men are winning grants and prizes. We are obviously less supported in our field, and this doesn't seem to be changing just yet. I could go on and on about this; it keeps me up at night. But then I remember what's most important, for now anyway: this disparity doesn't stop women from entering into MFA programs, writing books, and just keeping at it. People do it because they love it. And I do think/hope the literary world will eventually change its ways.

SR: What authors have been the most influential for you?

SS: I'm more influenced by visual and conceptual artists—my writing grew out of this background, and it's still where I get inspiration. But if I had to name one writer, I would say Virginia Woolf.