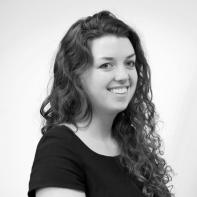 Lena Moses-Schmitt is a second-year MFA student in poetry at Virginia Commonwealth University, where she is the lead associate editor of Blackbird. Prior to studying at VCU, she was an editorial assistant at NPR. Her work is forthcoming in THRUSH Poetry Journal.

Nights in October, this is what waits for me:
the dark length of my hallway, my hand stretched to the wall
because I still don't know it well. Now it seems I live only in the dark:

I rise early, return late—biking always at night, my shadow leaving
& joining the black asphalt, disappearing & reappearing under streetlights,
a zoopraxiscope—one of those strips of paper with flip-book figures that spins,

& so adds up to one continuous image: a horse gallops round the reel,
a man bicycles in circles. One of the first movies: fifty silent seconds
of a train pulling into a station. The audience, overwhelmed, rushed

the back of the theater to avoid being hit. The white screen
flickering over the emptied seats, reality's intrusion into the dark.
After a trip to the orchard, twenty pounds of apples in my refrigerator,

round bodies knocking in plastic bags like strangers
at the door. Plucking them blindly down from the high boughs: a kind of greed,
my hand reaching for what I thought was beauty—one side crimson,

pull, the other, rotten & gashed. I stand peering in at them in my kitchen, feet cold
on the tile. The roar & light pours from the fridge door like a reminder
of what's to come: the freeze & ensuing thaw, soon enough.

Things will turn. But first, these days grow shorter & shorter. The rooms escape me.
I have forgotten already this apartment in daytime—if the sun fleshes
out each room or if it merely grazes them, one by one. The bottom of the orchard

floor was all shadow, trees that heavy with fruit. Tonight, I arrive at my locked-up bike
to find the headlight stolen—at intersections, the breath of cars go past,
no warning of me. I pause longer, unlit, feel for the change of air

just before a crash, the moment things turn.
And move on when none comes. When I get home, I talk with a friend
who lives in Europe. If it's 3 am here, it's 9 am there, & sometimes it is enough

to know that a day lives behind this. Thin as a curtain. A white lace
shade hangs over my window—outside, rustles & footsteps sound in the alley.
I move to stare out, knowing how my shadow must pass over the pane

rosy with lamplight. I want whoever is below to see it, for their vision to darken
under my silhouette. On my knee, a bruise
from colliding with the coffee table during a fumble for the switch. It ripens

like a plum above another scar, crescent dent in my calf, from a car accident
nine years ago today. Maybe we all repeat ourselves, flickering
round the wheel. One apartment over, a dog's solitary bark in the quiet.

In the orchard, the thud of an apple on the sodden ground, traveling the golden
distance from branch to shade. The moments that peal like a bell but open
silent into terror. The apples will fall again, next year, & we will be there.

To a Soldier on a Bus

On my coat's black collar,
a tulip, picked a day ago. It nods
in the road's current
running wet & dark beneath the bus.
I pinned it there this morning, an attempt to rescue its slender head
from the rotting ones in my vase. It is winter.
Next to me, your thumb is to your phone,
your head bent over it, hair shorn
as a field, rotating, growing back in. The tulip petals pale
& wilt round their veins like the hands of the station shopkeeper
fanning out the leather gloves:
wine, cerulean, chalk. Ridding the fingers
of wrinkles under the soft fluorescents.
Hazel & mahogany. A rust green
as a yard hidden by snow-colors of deep January
that flutter now past the windows
like eyes opening & closing. I know I am, like you, young.
But getting older. Your head drops
in sleep to my shoulder,
warm on my collar—
then jerks up. Neck bowing
& rising. One minute you're there,
awake, face lit to the dim glow,
the next you're not—how quickly
the shopkeeper slid
from my consciousness
as I entered the bus.
The shopkeeper spreading & straightening the gloves
as if they were not leather
but her own hands, reaching,
feeling them
to make sure they were still there.

There are many days now when I do not feel like a beautiful person.
Or like a person at all. Today, for instance: the DMV waiting room,
I'm the anemic glow of television, the neon puddle

on the stiff-backed seats. Below the screen, a bright yellow ribbon unfurls
text in repeat:
Alert: Missing senior. Name:

impairment. Disappearance poses
a credible threat to his health and safety.

Go, I'd say to him, get back home. I'm renewing my license,
though I've no car, & most places I've lived I walk everywhere:
in Rome, past flour dusting the bakery doorway, sifting

the air, & at the market,
past lemons & oranges in boxes curb-side.
And at night when the bus didn't show, my heels on the cobbles

sharp, ripping into the fog thick as wheat beneath the street lanterns. Walked.
And walked. At home, I'd had a friend in awe of everything:
I can't deal, she'd say often, doubled over like butter melts helpless on the stove,

it's just too beautiful, or just too funny. Laughing, hair falling across her face like flour
from a baker's hands, beautiful—

everything was beautiful & she could not deal. So for her, I paid attention: foam of milk. Shoulders bared on statues, gather of draped marble & also
the crumbled hole in the face's middle
where noses once were: this ugliness

we adore, for how it gives us back our pasts.
But at night I'd lay in bed, calves aching, waiting
to come home, each day peeling off like the heavy rinds of blood—

oranges, perfume long gone. I could have walked forever, out of my apartment,
backwards, to the airport—turning back the days, wrapping the skin back up
against their freshening fruit—until the tarmac spread out behind me, until I reached

the flight itself. And back home, as I walk, her car would free from the utility pole
unclasping easy as a necklace. Rolling into her driveway.
The snow shoveled back on top. But I could not do this.

In his last years, my great-uncle would leave the house,
hoping to find his long-dead wife.
Hours later, he'd turn up in the grocery
fifteen miles away, cupping an orange or apple in his palm
& speaking to it gently.

I think I understand you, Muhammad.
I also would like to walk back
into a place of beauty—
by which I mean, home. In the DMV now, I feel missing,
name not called though I've been waiting

two hours. On the way here, I passed a man
blowing leaves to the curb. They flew up around him, to the trees,
lifting to rejoin their limbs & for a second I thought
I've done it

‹ "If we are restless that must mean we're young oh we the most beautiful" by Katelyn Kiley up "Here, Touch Here, Just Beneath the Ribs" by Mary Carroll-Hackett ›