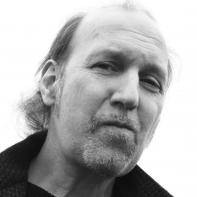 George Michelsen Foy is the author of twelve published novels. His latest is Mettle (University Press of New England). He was awarded a National Endowment for the Arts fellowship in fiction. His articles and stories have appeared in Rolling Stone, Harper's Magazine, and The New York Times, and his cartoons in the International Herald Tribune and on the NPR website. He has worked as tunnel laborer, commercial fisherman, and chief cream-pastry transporter in a cookie factory. He was educated at the University of Paris, London School of Economics and Political Science, and Bennington College. He teaches creative writing at NYU. 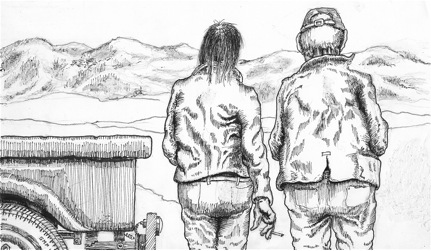 The uncle kicked a rocker panel and dirt poured down. "That dirt's same color as rust," the uncle said, and spat. "Can't tell what's rotting inside." Billy pulled the dipstick out. He squeezed off black oil, then rolled it between thumb and forefinger. He felt no grit. He needed a cigarette. He'd given up smoking a week ago. Billy looked toward the house. The truck's owner was heaving hay over the corral fence and pretending not to look at Billy and his uncle. It was cold, and the Sangre de Cristos looked blue and so close you could touch them, though they were sixty miles away: it was how they looked in dry cold air. The uncle turned toward Billy. "I don't get it," the uncle said. "You can't afford to leave, and now you want to buy this truck you can't afford so you can leave, 'cept you got no money to get off the rez to begin with." Billy, in straightening, banged his head on the raised hood. He rubbed his scalp, and slammed the hood down so hard it bounced. He slammed it again, less hard, and this time the catch took. Both men stood looking down the rust-colored arroyo. In the same instant they turned the collars of their jackets up. "I make it to Denver," Billy said, "I can work construction there. But I'll need a truck." The pickup's owner turned away from the corral. Two heifers swayed toward the hay he'd dumped. The man glanced toward his truck and walked toward the house. "Where I heard that before," the uncle said. "Jobs in the city. Money. Women." He spat. Where his spit hit the ground the dirt changed to the color of dried blood. "You all come back the same. Fucked up. Broke." Billy said nothing. His fingers were growing numb but they were also covered in oil and he did not want to slide them in the pocket of his jacket for warmth. The jacket was almost new, he had maxed out his sister's Visa to buy it. "I'll front you half, you stay here," the uncle said. Billy turned back to the pickup, climbed into the driver's seat, and gripped the wheel with both hands. The cab smelled of oil, leather, stale tobacco. It reeked of leaving, to Billy. He would have bought that truck just for the smell.