"Here, Touch Here, Just Beneath the Ribs" by Mary Carroll-Hackett 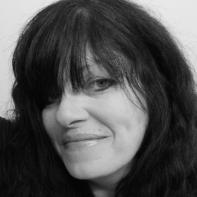 Mary Carroll-Hackett took the MFA in Literature & Writing from Bennington College. Her work has appeared in Carolina Quarterly, Clackamas Literary Review, Pedestal Magazine, Praxilla and Drunken Boat, among numerous others. Her collection of prose poems, The Real Politics of Lipstick, was released in August 2010 as the winner of the 2010 Slipstream Press Poetry competition, and she has another forthcoming, Animal Soul, from Kattywompus Press. She teaches Creative Writing at Longwood University where she also edits The Dos Passos Review, administers the Liam Rector First Book Prize for Poetry, and edits SPACES, an online journal of art and literature.

Here, touch here, just beneath the ribs you kissed when you were nearly twenty-three and I was a girl knee-deep in meadow, fescue, timothy, mustard, the wild ginger I had just learned from my grandmother a few weeks before we met. Dancing in that bar, that night, I wanted to tell you how to spot wild ginger, how Carolina, where we both grew, banned spreading cornflower seeds, and I most wanted to tell that you smelled of sweet clover, and sun. In my silence, I named you shining one. Later, while you slept, I whispered secrets into your hair—how black snake root would keep you strong, rue and thistle protect you, how the plant I named as spikenard—lavender—would lead you in my direction, when our time came. In the morning, I left rosemary behind, that you might, just might, remember. Because as false at times as desire may seem, it isn't. Nor is the humid wish for love, steaming, sweating, our second skins, those made of glass, the ones we fear the most, will shatter.