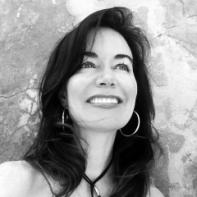 Sarah Wetzel is the author of River Electric with Light, which won the 2013 AROHO Poetry Publication Prize and is forthcoming from Red Hen Press, and Bathsheba Transatlantic, which won the Philip Levine Prize for Poetry and was published in 2010. Sarah currently teaches creative writing at The American University of Rome while splitting time between Manhattan, Tel Aviv, and Rome. You can read more of her work at www.sarahwetzel.com.

This might be heaven.
Above, someone is holding
hands with an astronaut, light years
among the space junk (exploded satellites and bits
of spent rockets, wrenches dropped
by the space-walkers).  Schoolchildren track
the debris cloud from earth.

The risen say that their souls
fly to the ceiling where they see, for the first time,
their own beauty. I don't believe they leave their bodies
so much as travel to a place where
they can be rescued.
Don't they all come back?
And the astronaut who wakes from gravity's dream,
he too cries out.
To know finally
that all astronauts die.

In his dream, the astronaut shows his daughter
once more
how water stays
pressed against the bottom of an orbiting pail.
Until his arm tires. Then he opens his eyes
just in time
to fire his ship's thrusters. Breaks free
from what we used to call heaven.

A Mirage of Shore

Every twenty meters along a beach, the same sign—
a stick figure drawn in red, arms raised
above stick figure red waves.
The international sign for dangerous waters.

Even so, the sea is filled with bobbing heads, their hair
slickened to the same shade.

From fifty meters out, the shore becomes another horizon.

I keep the windows closed tight during
the worst, tilt the chairs into the table so the dust
won't settle. The view through a window screen
slowly turns brown. Then winter. Then a month of rain.

This far out, the shore seems an illusion.

All around me is the sea. No, not the sea, it's a garden
of blue bottles, shattering, then growing
solid, as if by a glassblower's mouth, then again
shattering. And through them, my pale arms. No, a phantom
of pale arms, in the glass, hovering, which turn
the bottles see-through then to stone.

From this far, the shore a mirage—

I wave wildly at my husband, standing in the surf,
his daughter's red hair like a marigold.

—the shore I am swimming for and the shore.

When I stumble from the water, I realize
I've drifted half a kilometer south, the man and the child
I'd been waving at, strangers. From up the beach, I see
a figure running, hear him shouting my name.

It's in the same grasp of the chalice,
the last sigh
of the knight's desire, his
annihilation.
Oh, I went to the sea.

I splashed at the surf's edges,
my clumsy hands grabbing
for the sand
as it ran back
toward the water. But it wasn't what I wanted—

I just couldn't admit the tide's perfect
futility. That asleep beneath the rotting ship
as it disintegrates, the storied knight
who finally wins the golden fleece

must be killed instantly.
Or he lives
weakened by what he wants
to love
and nowhere to pursue it.

I stood once in Rome's Santa Maria della Vittoria
and I watched
what seemed tears
seep from the stone eyes
of St. Teresa. I saw

her lips part.
But if I say pain,
I've stolen the word from the mouth
of a saint, and if I say grief, what of Teresa's frenzy, the stopped-
forever small death, the way

her robes seem to want
to fall open? If I say faith,
what of her flesh? It wasn't just out of faith
Bernini carved that form. Once

outside Buchenwald's gates, I thought I heard
Robert Desnos reading
the palms of his death row inmates, foretelling
long lives, the men's return

to small chairs by open windows. But if I say
prophesy, I've pilfered the hope
from his poetry,
the headlong pursuit toward that open window

even though annihilation
is its only real end. And if I say truth,
what of Desnos, his shaved head bent
over paws of men

who would not stop
stepping forward, the tenderness with which he traced
their futures? What finally of
his fall?

And if I tell you, I believed
I would love you forever;
I'm only saying
we're not fools.

There is a delicious disorder
to the orbits of planets
and stars
and three or four years from now
it may be spring again.

Your daughters will gather
stones, their voices sneaking up on you
high pitched in girlish glee: die, die, die,
which in their language means nothing more
than stop it.

And if on that day you stand alone
on your balcony
looking west all the way
to the Mediterranean Sea, don't think
that this too will pass.

The Jacaranda tree will explode
to blue, branches weighted
with flocks of evening birds, the Judas tree
will again wear roped robes
of red and white flowers.

We will no longer be together.
I make no other claim for you
except to say, it's only one more horizon.
It's not the end
of anything.