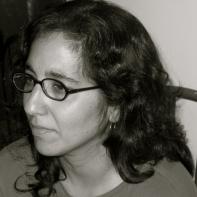 Geeta Kothari is the editor of Did My Mama Like to Dance?: And Other Stories about Mothers and Daughters. Her fiction and nonfiction have appeared in various journals including the Massachusetts Review, Fourth Genre, and Best American Essays. She is the nonfiction editor at The Kenyon Review and teaches at the University of Pittsburgh.

There were other rules: the no traveling on Tuesday or Saturday rule; the no-cutting-nails after sunset rule; the no-vacuuming-after dark rule. If you traveled on a Tuesday or Saturday, you wouldn't reach your destination. If you vacuumed after dark, you'd lose your money (or never make any). I have no memory of the consequences of cutting your nails after sunset. When I was child, nail cutting-finger- and toenails-happened on the weekend. We sat on the parquet floor of my parents' bedroom in a patch of sunlight, with newspaper under our feet. After we were done, my mother wrapped up the newspaper and tossed it into the incinerator in the hallway. Keeping cut nails in the apartment was bad luck.

As was asking anyone where he or she was going. Leaving the apartment with four suitcases, bound for India, my father would warn my sister and me not to talk to anyone. He avoided looking at anyone else who boarded the elevator and discouraged all conversation with monosyllabic answers.

In the awkward silence that followed, he would stare at the indicator or worse, turn to one of us—my mother, my sister or me—and start speaking in Hindi, desperate to avoid further conversation about his trip. For if someone asked where we were going, we'd never get to India. Our journey would stall or we'd be diverted. We'd be delayed in traffic and miss our flight. Luggage would end up on the other side of the world.

Leaving home wasn't easy. If I sneezed as my father was leaving the apartment—and because I had allergies, this happened all the time—my father would shut the door and look at me.

Oh boy, he'd sigh, and then he'd take a seat at the dining table, situated in the foyer.

The second sneeze cancelled the first. But when it became clear I couldn't control my sneezes, my father instituted a new procedure. If I sneezed, he would point to the sugar.

Take a pinch, he said.

We had three words for sugar in our house—shakkar, cheeni, and khaand—and I understood all of them. What I did not understand was how a pinch of sugar could cancel out a sneeze.

Why don't you listen to me? he said.

I took a pinch of sugar. I didn't ask where he was going. I kept my shoes neatly lined up in my closet. I believed my actions would keep my parents alive forever.

I left home. I moved to another state, and sometimes I wonder, if I hadn't given my parents my address, would they have asked for it?

I have my own house now. When my husband leaves, I ask, “When will you be back?” or “Going to the gym?” We remove our shoes at the front door, and by the end of the week, they've piled up, and it takes a while to put a pair together. One day, searching through the mess, I flipped one of my felt slippers over. It lay face down on the floor as I sifted through the shoes, late for work and irritable.

I had one word for sugar. Despite my best efforts, the people who understood the other words were gone.

Why don't you listen to me?

But my husband's mother was still alive. What would happen to her if I left that slipper flipped over? She was my mother-in-law, not my mother. Canadian, not Indian. Raised Mennonite, on a farm in Manitoba, she would never let a sneeze prevent her from leaving the house. She bought leather purses and shoes any day of the week.

I stared at the grooved rubber sole of my slipper.

And then I turned it over.

‹ "MT's Painting" by Clio Contogenis up "Teetering" by Jessica McCaughey ›