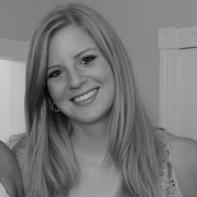 Katelyn Kiley is an MFA candidate at Virginia Commonwealth University, where she is the 2012-2013 Levis Fellow.

Up late detailing your next visit as if time weren't endlessly
unspooling. We make the most beautiful plans:
garlic & cilantro & red meat, horror films, splashes

of bourbon & just one more please while we'll wait to greet
the sun. My front porch is being torn down & rebuilt—
mornings, I wake to power tools pulsing through the walls

like a dentist drilling teeth, how even numbed, the vibrations
echo inside your skull. The man in the bar tilted his head
oddly, so I asked: both ears, do they hear?

& he flipped through his phone to find the photos they took
after the surgery—an s-shaped suture on the right half
of his skull where they tried to cut the tumor out,

& couldn't. People like that! Just going to bars! I tell you,
but you aren't impressed. Only tragedy, working its bony fingers
under one more man's skin like slipping the shell

off a hardboiled egg. Take all of Thanksgiving week off,
you say. Let's go to Miami. You mean it as much as you mean
anything, which is to say: completely & not at all.