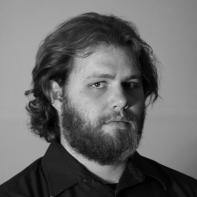 Kendall Pack is a senior majoring in literary studies at Utah State University. This is his first published work.

1. The boy who lives in the basement talks nonstop about the glory days of yard games. “Bocci Ball! Horseshoes! Croquet!” but most of all, “Lawn Darts, Dad.”

FUN FACT: You played lawn darts as a child before they were banned in 1988 by the Consumer Product Safety Commission.

Say, “Don't call me Dad,” and push past him to grab a jar of honey.

The boy should step in your way. “Listen, Dad,” he'll say, “They still sell plastic ones, but they suck.” He'll stick close to you, chest to chest. “They just don't have the heft!”

Shove him to the side, rush to the shelf, snatch up the honey, and sprint for the stairs.

“I just need some glue!” he'll shout. “Can I get some glue? Could you toss some down?”

Shut the door behind you.

SUBSTITUTION TIP: Honey can be used when glue is unavailable.

2. At his workstation the boy sands the tip of a wooden dowel, whittled down to a fine point.

FUN FACT: The table is the same one you used to sell candy from as a child.

“They carried them in their shields,” he'll add.

Chuckle humorlessly and ask, “In case a game broke out?”

REMEMBER: The more questions you ask him, the closer you get to him. Ask yourself: is this a good thing?

“Actually,” he'll say, “They were used as weapons.”

Nod while asking yourself why you're in the basement.

3. The boy makes a racket downstairs.

“Whistle while you work,” you should hear him singing out of tune, followed by an attempted whistle. The sound of a metal grinder will attract your attention and cause some concern.

Rush downstairs to find the boy sharpening the tips of metal rods, sparks shooting out and landing on the cement floor.

REMEMBER: Sweep up any and all shavings and other metallic particles.

The boy will now see you, turn off the machine, and say, “Hey, Pop!”

Say, “What are you doing?” in your most serious tone.

“Oh,” he'll say, “Well the wooden tips were good and all, but you just don't get the heft without the metal.”

“You know,” he'll respond, “Like a good baseball bat.” He will proceed to lift one of the metal rods and balance it on his hands, bouncing it softly up and down. “See?” he'll say, smiling, “Heft.”

The sharpened metal rods should be put aside to be fitted with a body and fins.

4. The boy is at the top of the stairs, cutting a thick piece of plastic with a bread knife. He'll look up and say, “Howdy, Pop! Why so glum?”

Reply, “You're making a mess.”

This should cause the boy to stand up, brushing the plastic shavings from his jeans, and say, “Sorry about that, I'll go get the broom.”

“It gets stuffy in the basement,” he'll reply, blowing particles from the hunk of plastic.

Say, “Yeah, people tend to have a tough time breathing when they do art projects in enclosed spaces.”

Ask, “Don't you have any friends?”

“Just you, Pop,” he says, holding what you can now see are three completed plastic fins, ready to be fitted onto the lawn darts.

5. Accept your situation and choose to deal with it directly. Descend the steps to the basement.

Scratch the three-week beard on your face.

CRAFT IDEA: You can use your beard as a calendar to measure how long you've felt completely alone.

Say, “Listen...” and realize that you don't know the boy's name.

The boy will stop and look at you, his eyes huge and full, not the vacant soulless stare you've greeted yourself with in the mirror every morning, but the look you used to have at his age.

You will notice that the basement smells like honey. In the corner of the dark room, a small shaft of light streams in from the window and illuminates the lawn darts, hanging from an exposed beam in the ceiling.

Intend to kick the boy out, but let the smell of honey, the sleek design of the darts, and that familiar look in his eye soften your heart. Now say, “Hey, are you just going to make lawn darts, or are we going to play lawn darts?”

The boy will smile, a full-toothed grin, and clap his hands together. “Give them two hours to dry, and let's do it!” he'll shout. He'll then run to his lawn darts and blow on the fins to dry the glue faster.

6. You don't remember how to play. Ask the boy the rules of the game.

FUN FACT: While lawn darts are indeed similar to horseshoes in that both can cause major injury, horseshoes differ in that less people have died during play.

Set up a target by placing a lawn chair in the middle of the backyard. To throw, hold the dart by the bottom, between the fins. Swing your arm back for momentum and release the dart into the air when your hand swings back in front of your face.

The dart will sail up into the sky, in front of the sun. Shield your eyes to watch it arc and begin the descent. At this point, a flimsy fin should pull away from the body of the dart, releasing the scent of honey into the air and causing the dart to drift left, away from the bullseye and outside the scoring field altogether, landing with a soft thunk in the no-point zone (the boy's neck).

As he stumbles, reach out and catch him.

FUN FACT: He has your eyes.

The boy should now be a man, your mirror image, his stubble rough against your hand. The body should evaporate into the sky in a few minutes.

Go inside and go to bed.

7. Awaken to the sound of a knocking on the basement door.