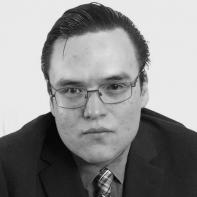 Denton McCabe is a multidisciplinary composer, artist, and author. He has experience as a guitarist for blues and death metal groups; providing soundtracks to short films and his own art installations; and as a producer of contemporary classical performances. As a writer, he has had pieces published for the New Mexico Museum of Art and Nub Culture, which ran a six-week series on his album VRNK Mix. His artwork consists of mixed media collages heavily influenced by Arturo Herrera, Hannah Hoch, and Brion Gysin. He is currently working on marrying his art, music, and writing into one singular creation.