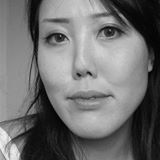 Hannah Lee Jones's poetry, fiction, and essays have appeared in Literary Orphans and Orion, among other journals. She edits The MFA Project, a resource for writers pursuing their craft without an advanced degree, and grows vegetables on Whidbey Island in northwest Washington.

The time I drove a nail in my apartment
and the girl who lived (more like hid) next door
hurled an earthquake through the wall screaming
What the hell’s the matter with you, you bitch?
I didn’t so much as flinch, considering instead
in the morbidly obese silence of my 1 a.m. insomnia
whether this was fair – that her Amazon Prime
boxes and grocery deliveries barricaded my door each night;
that the hallways on fire with footsteps
and slammed doors so she would Never Leave Home Again!
had halfway driven a hole in my skull.
And I promise this was more than my ear’s opinion
of the delivery of the latest Guster album.
This was the what-ness of someone I’d seen only in dreams
where she ferried Pirate’s Booty to a mouth half the size
of her eyeless face; the matter of my rage,
downed in a whorl of melatonin and scotch
for a skin that was never thick enough.
In Japan there lived a greatly revered ghost.
The problem was that to look at him was to risk getting eaten.
The gods love a devourer of sins, which is what he was:
retiring and shy until he swallowed a salaryman
with his words want please NOW. He tore
through streets and alleys eating everything,
dogs and lanterns and children until he had to vomit
and start over. The gods must know his hunger
is everyone’s; I suppose the gods also love us,
though when I think of that ghost I wonder if they love
the little hearts a world abandons as it rails at the sky
with glitter on her face and a sunburn on her back
with no words to cry out, no flag even to fly
that says Help! I don’t know how I got here.
So no wonder I couldn’t sleep, amid the pounding
and shouting and screwing (hers and mine), the volts
from her fridge throbbing the earbuds in my head;
I was too busy to pull them out and still am.
But I’m not hungry or lazy or retiring or shy,
just too busy to shout nothing to what’s the matter with you?
or reply fuck off to you bitch. Too busy even to say
yes to could you please sign here? The nail
under my hammer bent once and forever on please.

How stupid of me, but there I was, and there
you were:  my mother crossed first, but not before
reminding me that it was foolish to wish upon
a speeding star. But how does a fawn not throw
herself before a beast that bright? I fixed my eyes
on you instead of her, the arms of oaks and maples
mirrored in the rumps of beasts streaking your stone
colored river, when your star screamed notes
like arrows or the dirge of trees for my father
in famished meadows, the stain of him in tall grass,
and I galloped, or maybe leapt, or was it fell
to packed ground, the motes of choked dust
up-kicking clouds from your tough silvery muzzle,
and saw your face through its rained eyes,
your own eyes wide with what I knew not as terror
but a raptor-mouthed prayer to our maker,
the weep of long seconds like chum winking out
over a thousand miles of water – before I stood
and fled, without telling you to be careful later,
and the woods swallowed me whole and red.

She grew from a knot in the shower.
I stooped to pick it up when she reared,
screamed, monstered to a foam,

and chased me westward; the sun
was still high. She cowed me naked
on the shore, and I asked her:

Didn’t I kill you before?  The wet
bullets of her eyes gave no reply and,
flashing red, walked down her face

to marry her mouth and its morgue
of impossible flies. Resigned,
I bowed to her and offered

my head. When it was over
the sun had risen to new orange,
to skies blowing clearer,

to an earth looming softer, to the glinting
sounds of water – to a long-haired
woman bathing below,

and I swallowed a sweet terror:
that there had been two of me
always, like flecks in a mirror,

each written from the other;
that my world would drain to its end
if it spinned on without her.

‹ Two Poems by Christina Olson up A Poem by Jacqueline Boucher ›