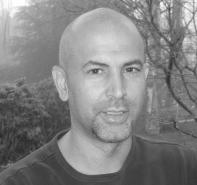 Caleb Powell has work in Poets & Writers, The Sun Magazine, and ZYZZYVA. With David Shields he co-authored I Think You're Totally Wrong: A Quarrel (Knopf), now a film starring Shields and Powell and directed by and co-starring James Franco. "Debating Ayesha" is an excerpt from his memoir about his engagement to a Muslim woman. Other excerpts have been published in The Doctor T.J. Eckleburg Review, Harpur Palate, New Madrid, Pleiades, Quarter After Eight, and Whiskey Island Magazine.

Naguib Mahfouz: “No blasphemy harms Islam and Muslims so much as the call for murdering a writer.”

My father, born in Lebanon, of Persian and Sephardic descent, came to America as a child. After my paternal grandfather died my grandmother, Geraldine Cristina Powalski Mizrahi, eliminated her married name, and anglicized her surname and my father’s middle name, negating the Jewish and Polish. “Mizrahi” means “Jew from the East.” My father, David Jamil Mizrahi, became David James Powell. I grew up secular with little connection to Iran and the Middle East.

Ayatollah Ruhollah Khomeini:  “I inform the proud Muslim people of the world that the author of the Satanic Verses book which is against Islam, the Prophet and the Koran; and all involved in its publication who were aware of its content, are sentenced to death.”

I took writing classes at the University of Washington at the time of the publication of The Satanic Verses. The polemics of the fatwa altered my direction as a writer. And as a human. They still do.

Ysa Osman, Documentation Center of Cambodia:  “The Khmer Rouge wanted everyone to be equal, and when the Chams (Islamic Khmer) practiced Islam they did not appear to be equal. So they were punished.”

In 1977 Ayesha Abdullah escaped the Democratic Republic of Kampuchea with her family. They arrived in Seattle two years later.

When I knocked on the porch of The Cambodian News, I expected to be greeted by an old warrior editor, grizzled, his mouth dangling a cigarette, consumed by an obsession to see the surviving Khmer Rouge leaders sent to hell or a war crimes tribunal.

Instead, there stood a woman with a most cheerful expression.

I said, “Hi, you don’t know me, but I’m writing about war refugees and I thought this was The Cambodia News.”

Ayesha said, “Cham, or Islamic Khmer, to be exact.”

Ziauddin Sardar:  “Ayatollah Khomeini’s fatwa not only declared a death sentence for Rushdie, it made me redundant as an intellectual. Implicit in the fatwa is the proposition that Muslim thinkers are too feeble to defend their own beliefs.”

Yusuf Islam, aka Cat Stevens, posited what would happen if he encountered Mr. Rushdie:  “Try to phone the Ayatollah Khomeini and tell him exactly where this man is.”

William Nygaard, a Norwegian editor, received a volley of bullets outside his house after the fatwa. Use of his limbs was restricted for years. When asked if he would stop publishing The Satanic Verses, Nygaard responded, “Absolutely not. Without freedom of expression, there can be no dissent, no debate, no democracy.”

Ayesha and I, on our first date, drove through downtown Seattle on the Alaskan Way Viaduct toward Gasworks Park in Ballard. “Don’t Be Shy” played on the car radio.

Cat Stevens:  “You know love is better than a song / Love is where all of us belong / So don't be shy just let your feelings roll on by / Don't wear fear or nobody will know you're there.”

I said, “Too bad he quit singing.”

“Is that what Cat Stevens goes by?”

“I didn’t know. I heard he supported the fatwa against The Satanic Verses.”

She said, “Some people said Rushdie stuck a knife in a billion Muslims.”

Ayesha did not think anyone should be killed for writing a book, but she did not see the necessity to insult Muslims. We switched to more romantic topics, such as the lovely summer day, the sun reflecting on the boats in Union Bay, and the serendipity of our meeting.

According to the Samma Vaca, “Right Speech” is the third of the Noble Eightfold Paths, to be expressed “at the correct time, in truth, and benevolently.”

After Ayesha and I broke our engagement I lived in a monastery in the farmlands northwest of Bangkok. My dormitory room had a fan, linoleum floor, and patched screen windows. I shared a shower and latrine with the monks, most young and who could only speak Thai. The pramaha, or head monk, showed me their library.

We had avoided the ubiquitous mines planted between agnosticism and faith. Our compatible financial goals and views on children, location, and lifestyle encouraged compromise. I read the Koran, attended mosque and study sessions, and practiced Islamic dietary and sanitary precepts. I could survive without pork, would not consume alcohol in her presence, and had grown fond of having a bidet attached to the toilet. But my immersion into Islam solidified my views. I remained agnostic regarding God, unconvinced by myth, and an absolutist concerning free speech.

Every morning the monks went around a nearby village to collect alms. The gifts included food, and in turn the monks would give me a bowl, a combination of curry and fruit and vegetables and rice. Thousands of miles away from Ayesha, separated by time, surrounded by aphorisms of “right thought,” “right speech,” “all humanity suffers and suffering comes from desire,” and “pain is inevitable, suffering is optional,” I considered the disappearance and contradictory existence of true yet ephemeral love.

‹ "Gone," by Brianna Bjarnson up "Prairie of the Mind," by Cathy Krizik ›