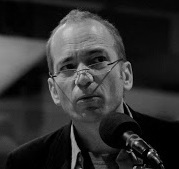 JG and KMD were born in Portland and Tulsa. Their collaborations appear in OmniVerse, Requited, diode, and elsewhere. They currently live and write in rural Missouri while also taking frequent trips on the bullet train from Paris to Agen.

Thermopolis as a Concept

The scenery is used to being blamed for such things, red, beige, and more red with some yellow. And blue and black and white.

I’m busy looking at everything I’m looking at. It rises and falls as I sit and stand. It’s shadowy or bright or neither really, navys and grays. I expect great things from it.

A little jump and it’s leaping. There on the bluffs overlooking the town I see it leap as I’m looking at it leaping.

There Was Never a Thermopolis

I tried to phone you, but we'd reached the very edge of the meadow. Now a felled tree, some thistle. It all reminds me of a book I read, the one where the field only seems endless.

In the book, everything's haunted, even the flowers. Especially the flowers. And the chapters aren't numbered, so you forget exactly where you are, and where you placed the key to the room that holds all of your things from childhood.

Maybe that's why I dial the number again and again. It goes without saying the book was right about the landscape, the way it darkens one tree at a time.

By now the receiver feels cold in my hand. My face gone pale with all this thinking.

What Would You Have Me Say

While we’re doing it, it’s what we’re doing, as a little salute to the crowd. After a time, though, it starts to look like a parking lot, but that’s still before we have a name for it. Then we name it something springy, because we don’t really like parking lots all that much.

You age more slowly as your speed increases. Maybe that’s why parking lots seem so dismal. But when you’re late for a meeting, a parking space feels like an award.

The crispness of the grass along the sidewalk is also important, and lends an air of futurity to walking into the home or building. I’m going to do OK here, we think. Things are under control. It’s like looking into a mirror.