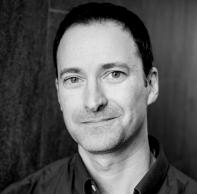 Darrin Doyle’s most recent book is the story collection, The Dark Will End the Dark (Tortoise Books). He is the author of the novels The Girl Who Ate Kalamazoo (St. Martin’s Press) and Revenge of the Teacher’s Pet: A Love Story (LSU Press). He lives in Mount Pleasant, Michigan and teaches at Central Michigan University.

The spongers telephoned, emailed, even filled her mailbox with honest-to-goodness letters. Her social media was invaded with spastic all-caps congratulations and outpourings of generic love. How had they found her? She didn’t know. The Lotto Commission had asked if she wanted to remain anonymous, and Of course had been her reply. Loose lips sink ships was the phrase her fourth grade teacher Sister Janet loved to say. Lucy figured that a single member of the Commission – who could say who it was? – had uttered her name, causing word to spread like butter on a hot skillet.

Lucy Warner, sole winner of the fattest jackpot in Michigan history, every cent her own minus the sizable federal and state taxations. What remained, however, was enough to propel her into an income bracket reserved for royalty and real estate magnates. Receiving her winnings in one lump sum meant hiring a financial advisor and lawyer.

Relatives she’d neither met nor heard of poured into her life like sour milk. Pale, worn-eyed folk who she wagered had carefully selected their most moth-worn, ill-fitting garb to affect a portrait of pathos for their millionaire kin: they huddled on her porch offering meek smiles and homemade banana bread, usually with one or two ragamuffin children hugging their thighs, presenting a Dickensian scene straight out of Hollywood.

Lucy was cordial, inviting them in for coffee and juice. Her lawyer strongly advised against such behavior, but she wanted the company and told him to mind his own business. She was alone in the world, after all, having not spoken to her immediate family in ten years.

Along the contorted paths of her visitors’ tales she endeavored, wearing a patient smile, listening as she chewed their spongy baked goods: Your mother was my aunt’s second cousin, and I’m pretty sure we met at such-and-so’s wedding eighteen years ago? I remember you looked real nice. These are my two little girls here. You still look so young!

Upon seeing the winning numbers announced between Jeopardy and Wheel of Fortune, Lucy had telephoned the insurance office where she’d worked as secretary for twenty-two years and left a message declaring Take this job and shove it! – in effect, anyway, if not in precise words. Fifty-four years old, widowed, prone to knitting socks and reading mystery novels, never an attractive woman, her life in that ecstatic moment felt renewed.

The next week she booked a flight to Hawaii and treated herself to a seven-day vacation complete with spa treatment, including caviar conditioner and a facial of twenty-four karat gold. A wardrobe makeover followed as she jetted to Chicago, hiring a high-priced stylist for a weekend of shopping and salons.

For a brief time Lucy embodied chic and trendy, her hair taller and more dynamic, her bust lifted and legs aglow. She stood before the mirror and saw a classy 37-year-old dame looking back. But the same emptiness lingered in her eyes, unchanged and unhidden by expensive makeup. She resumed her frumpy Midwest appearance, preferring the comfort of clothing that felt like the embrace of an old friend.

The mooches never offered legal documentation of their family ties. At most, old black-and-white photos were procured, tired-looking 1950s farm scenes with dirt-smeared children, stoic men, do-ragged wives, handsome mules. Lucy didn’t recognize anyone in the photos, but she didn’t argue. She enjoyed studying the visitors’ faces, searching for some sign of her connection to them, picturing each as a young person full of hope, before whatever misfortune had lead them to beg money from a stranger. Cutting a $1,000 check proved the simplest gesture to send these folks away satisfied, and even a dozen such transactions was like a handful of sand from the beach of her fortune.

So they kept coming. Day and night, un-dissuaded by the etiquette of reasonable visiting hours, her windows glowed with headlights as they maneuvered their jalopies against the curb. Coworkers, enemies, acquaintances, fourth and fifth generations of so-called relatives, people she had bought eggs from at the grocery store – they all came, and none were turned away except those who claimed no relation to her.

Her true family – mother, father, and brother – did not contact her. Not even this windfall, apparently, could quell their hatred, hardened to diamond-like permanence by time.

What was her great sin? The shunning of deviance, simple adherence to God’s Holy Word. Shunned by the shunned, she prayed nightly for Jesus to forgive them.

The terrible epoch in which Lucy was born had apparently sanctioned sin with such aplomb that those who cast stones were now disavowed like sinners themselves. Her brother was a homosexual – and a cross-dresser to boot. Lucy’s condemnation of his behavior caused Mother, Father, and brother to excise her from their lives. Intolerance, her mother said, is the great plague of our times. They told Lucy she had hatred in her heart, but they were wrong. Why couldn’t they see that it was love that moved her? If a person was sprinting toward a cliff, wasn’t the Christian act to tackle them to the ground? It might bruise the flesh, but it would save them from destruction.

And weren’t they in fact being intolerant of her intolerance? Lucy’s sardonic laughter at their hypocrisy gave her no joy, only gray hairs and sagging skin.

Dear Mother and Father, she wrote in her notebook. And then, as usual, could think of nothing else. She ripped out the page and threw it away.

Dear Michael, she wrote. Again the simple act of penning the greeting was enough to drag her deep inside herself, where no one could reach. This was a place she’d come to know as home. She tossed the unwritten letter in the garbage and then threw the garbage can into the dumpster that got dragged to the curb.

Word spread of the woman in the rundown house who would give you $1,000 if you asked nicely and told her she was your blood. The march of spongers, beggars, and moochers continued through fall, winter, spring, and summer, and then into a new season. The well of Lucy’s riches was deep; she figured she could continue this practice until the Lord called her away.

“This is a beautiful house,” the woman said as Lucy led her to the kitchen.

The woman probably thought she was being original, but everybody said the same thing. Lucy never tired of hearing it, though. Much love had gone into making this place. She’d bought it with her husband and would never move. Certainly she could afford a gigantic new house with an “en suite” bathroom, granite countertops, and all of the other nonsense today’s young people demanded. No thank you. She would stay where her memories kept her company.

“They say you give money to everyone,” the woman said. She had a youthful face, with long lashes and blue eyes. Her eyes looked tired. It was difficult, now that Lucy looked closer, to truly gauge how old she was. She had a gentle, soft-spoken voice. Her disposition was uneasy. She twisted her napkin and now and then glanced at the kitchen door as if expecting something terrible to rush through it.

Lucy filled their cups with cinnamon tea before sitting in her chair. Discretely she checked the microwave clock, which showed she still had ten minutes. Lucy had hired a publicity agent, who got paid to schedule appointments for these people. She often chuckled with amazement: A publicity agent for Lucy Warner? Who would have thought? It was a full day today, booked in fifteen-minute blocks from morning until suppertime with an hour-long break for lunch.

This woman had no photographs to display. And as the seconds ticked by, she sipped at her tea, avoiding Lucy’s eyes. She didn’t even seem to have a story to tell. Lucy started to feel impatient. Her one rule – albeit unwritten – was that she herself would not introduce the topic.

“Who says I give money to everyone?” Lucy said. She didn’t mean to sound accusatory, but it came out sounding that way.

“No one in particular,” the woman said. Her voice was scarcely above a whisper.  “It’s common knowledge that you give to all.  You’re quite Christian, aren’t you?”

“Don’t always believe what you hear,” Lucy said, pleased to insert a little life lesson into the encounter. Then she added, “Not that there would be anything wrong with helping strangers.  Christ tells us to recognize our brother in the least of men.”

Inside, however, Lucy was troubled. She was not indiscriminate. Each visitor made an honest effort to convince her that they were related. Lucy knew they weren’t being truthful. Literal truth was beside the point: she wanted their stories. And the satisfaction she got from hearing about their families, jobs, and relationships – both good and bad – made every personal check worthwhile.

The woman raised her face toward the rain-spattered window. The shadows on her cheeks gave the illusion of black tears squirming across her skin. There was something familiar about her, Lucy realized, something in the eyes.

Their time was running short; another moocher would be arriving in moments. “I have one simple requirement of the people who want my charity,” Lucy said.

The woman turned to face her. Again Lucy felt the sharp twinge of recognition. The brow, the lips.

“I want to hear you say it,” the woman said.

Her voice, too, was like a melody Lucy had heard many years ago.

Tears spilled from the woman’s eyes. Absentmindedly, her fingers rotated the teacup on its plate. She shook her head. “No. My name is Michelle.”

Lucy stood abruptly. “Our time is over.”

Lucy removed the teacups from the table, taking the woman’s right out of her grip. She carried her finery to the sink without a clatter, proud of the steadiness of her hands.

She looked out the window: Damp gray sky. Dead grass. The barren oak tree, the past and future dormant in every gnarled branch. Inside the scene Lucy could distinguish her own face, a beautiful ghostly shadow entwined with it all.

“I can’t tell your story for you,” Lucy said.

Lucy turned, her lips drawn tight against the world. “You have to leave now.” She felt protected and warm in the arms of her riches, which had bestowed upon her this great gift.