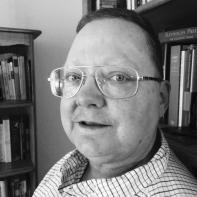 Christopher Kuhl was born and raised in northern New York State, and holds a Ph.D in interdisciplinary arts from Ohio University. He taught writing and world literature for seventeen years at the Illinois Mathematics and Science Academy. By nature a poet, he has published extensively; this piece of satire is one of his few prose pieces, and his first short fiction to be published. In addition to writing, he also makes visual art (he has, however, no plans to illustrate his written work), reads voraciously and widely, and studies philosophy and Hebrew. He has never been bored.

When I am thin, I will marry a fat man: he will not believe his luck and good fortune, like one of those fat, ugly guys chasing after a beautiful girl on all those TV programs.

When I am fat, I will marry a thin guy: he will feel virtuous and proud, better than his other thin buddies, because he can look beyond appearances to what’s inside, the good that all fat women have within them.

When I am fat, I will marry a fat man: we will clasp each other and roll around the room, on and off the bed, up the walls, across the ceiling—yes, our conjoined fat will give us undreamed of buoyancy: we will be Plato’s original human beings.

When I am thin, I will marry a thin man: we will try to suck one another into ourselves to get fat; clearly, the best thing is to be fat.

It is best to be fat because then you can go on both daytime and prime-time TV. On daytime TV, they will have special presents, special to make you feel special—visits to spas, manicures, pedicures, make-overs—because they think being fat must make you unhappy, and they want you to know that ALL PERSONS, EVEN FAT ONES, ARE SPECIAL. And everyone will applaud, the camera will pan the audience, and some of the older women and fat twenty-somethings will have tears on their faces.

On prime-time TV, they also assume that being fat makes you unhappy and THEY’RE GOING TO DO SOMETHING ABOUT IT. So they’ll put you in teams—red floppy T-shirts and spandex work-out pants for the girls, blue for the guys. And then they’ll give you a personal trainer with rock-hard abs (which you too can have someday), who used to be a drill sergeant in the Marines. He will make you run and climb and lift weights and run some more, yelling at you all the time until weigh-in, when they see which team, red or blue, has lost more weight. And then someone will get sent home (“You’re fired,” as The Donald would say), and before they go, they will all hug and cry “we love you,” and the one being sent home will say, “I may have lost, but this has changed my life, and I’m going to keep working on my own. Thank you, thank you, thank you.”

Clearly, this is too much. This fat person does not value him- or herself, and will never roll, light as air, around all the surfaces of the room with another. Instead, they will cut themselves in half, and bloodied, will, as Plato would observe, search fruitlessly for their other half.

And there being none, they will sink into the sofa, and slowly melt away into the cushions, along with the scraps of change and potato chips. They are no longer fat, and SURPRISE! NOBODY CARES! NOBODY!

Three major families: Farney, Virkler, Zehr. A hamlet of five hundred, surrounded by other similar hamlets; Farneys, Virklers, and Zehrs, and their branches spread all over.

A Farney marries a Virkler, and has eight children, six of whom survive into adulthood. One marries another Virkler; the others, all sons, marry Zehrs, except for one who marries a Marilley. Another son, a Farney, comes home, a lunatic from the Great War, and never marries.

The families thrive. Farneys, Virklers, Zehrs have children and grandchildren, all well-supplied with cousins, and Farney, Virkler and Zehr aunts and uncles. And again, for a little fresh blood, some of them marry Klocks, Youseys, and Monnats.

For decades, these families proliferate, until nobody can keep the relatives and blood lines straight. And then the unthinkable happens: Greta Farney marries Allen Farney. They think they’re from different blood lines, but now Greta Farney is Greta Farney Farney, wife of Allen Winston Farney. They have seven children, four boys and three girls, two of them twins, and in this territory of Cowton, the Farneys become the “First Family.”

And I, a kid, a Kuhl (related to the little enclave of Klocks, who are in with the Farneys),

sing with my brothers and schoolmates,

Who knows whether to laugh or cry?

THE POWER OF THREE

But then he realizes he wasn’t always old enough to be married. He used to be a boy. Some of his ages were divisible by three—six, nine, twelve, fifteen, eighteen—and some were not. He did not like the ages that were not. But he survived them, fearing danger, until the next year divisible by three arrived. Nineteen and twenty were particularly problematic; he was almost, but not quite ready to be on his own.

So he first married at twenty-one, a number divisible by three, a good omen, even though his father had died that year. But he still had his mother. She could appreciate the omen. And his wife.

Now, he calculates, his married years total up to forty-eight. The number is divisible by three, but the average is sixteen. Not divisible by three any more than twenty-three is. There are fractions to deal with. Messy. Not orderly. He dislikes disorder. His wives were disorderly: wind-blown, smeared lipstick, hemlines uneven. How could he live with women like that?

He evens out his shoelaces, puts his shoes neatly together, toes and heels lined up beside the bed, and turns out the light.