"The Technicolor Jive" by Michelle Bracken 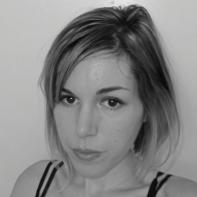 Michelle Bracken is assistant fiction editor at The Great American Literary Magazine. She studied creative writing at the University of Redlands, and holds an MFA in Fiction from CSU San Bernardino. In her nine years of teaching elementary school, she is most proud of leading Beyoncé flash mob performances on the playground. She likes lemons in her water, the works of Joan Didion, and Motown R&B. Her fiction and creative non-fiction have appeared in Litro Magazine, The Baltimore Review, Dewpoint, The Redlands Review and RipRap. Follow her on Twitter @MBracken4.

The bird in the box. The box was moving. The bird breathing so hard.

The old lady talked a lot about Descartes. She said that he liked to sleep in ovens, that it helped him think. “What do you think about that?” she asked the man, her tenant.

She had a book in her lap, and looked the man up and down. At night she could hear him pacing in his room, his feet shuffling through piles of papers.

The papers started when he was five. His parents argued in the kitchen, his father at the table, his mother at the sink.

Always yelling. It made the boy boil. It made him look for other places to be, like under his bed, in the closet, or on the fire escape. Sometimes he walked into his parent’s room and stood at the foot of their bed.

One afternoon he found a stack of papers on the floor. Mostly bills, receipts. His father’s handwriting scribbled on the back of an envelope. Get a washer for the toilet. A drawing of a man asleep, three little zzzs floating above his head. The boy took the envelope, folded it in half, and shoved it down his pants.

It was a cycle that never cycled off. The man attempted to gather the papers into piles by category: credit card statements, bills >>>> water, electric, phone, junk ads, notes to self, receipts, IHAVENOIDEAWHERETOPUTTHIIIIIIIIIIIIIIIS!!!!!!!!

The man paced back and forth in his room, his hair wild, strands in all directions. His arms propelling him forward, and then back again. Deadlines. Due dates. He could not sleep.  There were so many nights when he could not sleep.

After school the boy liked to watch black and white westerns. His father not home, his mother not at the sink. She sat by the window, looking out at the fire escape. Sometimes he caught his mother looking out to look down.

His mother turned to face the window. The man pulled the curtains back so that she could see the robin. The bird flittered against the glass, and the man wanted his mother to see the white of the bird’s belly, how it pulsed in the sunlight.

When the man was eleven, he had boxes of papers. Certificates from school, notes from his teachers. The top math student, the boy kept all of his exams, even his times tables. He had so many boxes that he had no space for toys. His parents did not buy him any, and his grandparents only visited once a year, no gifts in their hands.

“Such a quiet boy,” his grandmother said.

She was sitting in the kitchen with his mother, and they were talking in Spanish, and the boy could not understand. The talking, it seemed to go in circles, and the boy sat out on the fire escape, looking out but looking down. There he saw his father, three stories below, sitting in the street. His father had a bottle beside him, a tie loosened around his neck. The bottle almost empty, and the boy knew that his father would sit like that for awhile, just drinking, and nodding and never looking up.

His mother was quiet. She kept her back to him, sometimes turning if he asked enough.

Her face still, her eyes so dark. She had the grayest head of hair he had ever seen, and when he walked home, the boy wondered why it was that his mother’s hair was that way, why she was old when she was not.

“Are you my grandma?” he asked.

His mother did not laugh. She did not smile. She stared at him, and walked away to make dinner.

The steak is too hard, his father would say.

His mother standing at the oven.

They ate like that, the television singing in the background, a commercial for detergent, El Bailaran, the man of the hour, tap tapping his away across the screen, his pantsuit bright and striped, the blue of his jacket calling to the boy from the corner of his eye. A cane in his hand, his yellow top hat proudly displayed in full technicolor.

The man had a bird in the box. The box kept moving, and if the man was quiet enough he could hear the little rapid breaths. The papers in his bag. He carried his bag over his shoulder, the box in his hand. He had so many things due: a minimum payment at the credit center, a renewal of his car registration, a notice of a bill not paid. The one in BOLD at the top of his pile.

The bird in the box tap tapping against the cardboard.

El Bailaran grinned from the dashboard, a gift from the old lady.

A bobble-head for the bobble-head, she laughed. She handed it to him and winked.

El Bailaran was small in stature, a cane in his hand, his top hat raised. His eyes so dark, his teeth shiny, like little pearls.

He tried to schedule her trips in order to make more time for himself. But old ladies are slow moving and slow talking and what would take the man minutes would take her an hour.

In the car. Driving.

“It wasn’t really an oven,” the old lady said.

The sun hot on their faces through the windshield. The powered windows not always working.

The old lady asked about the drive. Can we go to the nursery? Can we go to the post office? Can we go to the? To the? The? The? She asked so many questions, and because of this the man learned to nod. He nodded, and drove along. At each stop, she took her overloaded purse, and when she braced herself, papers fell out. Sometimes the man found a to-do list, a sticky note of a Bible verse, or simply Praise the Lord!!!

Once, she dropped a flyer from the senior center. It was the loudest of yellows, and the man read it to himself as she talked in circles. He nodded, folded the paper and shoved it under the seat. Not an oven, he thought, but something so hot it could clear his mind like light.

El Bailaran, the dancer on the postcard. He stood on a stage, his feet crossed, smiling. The cane behind his back, held up by the back of his arms. Hands on hips.

The man studied it in his stack of mail. Something that caught his eye, something so bright in his pile of white. The man had moved away from his father, and he did not know where he lived.

His mother had died in the hospital, her body gray with cancer. His father not there, just him at her bedside, brushing back the strands of her hair. They had been sticking to her face, and she asked him to open a window.

“What’s out there?” she whispered.

“What happened?” the boy asked his mother.

When he got in the car, the man checked his bag. It was at his feet and he looked through the papers, and began to drive.

It was quiet, and El Bailaran was bobbing, his top hat waving.

The bird in the box.

It was hot inside, the windows rolled up, the sun beating down. The bird in the box was silent, no tap tapping of the cardboard, no small breaths, rapid or slow-moving.

The man peered inside, and saw the stillness of white, the beak open.

The boy asked his father about the toilet. “What’s that noise?” the boy kept asking.

His father kneeled in the bathroom, the back of his neck red and sweaty. He had no hair, the top of his head shiny like a coin.

The boy stood in the doorway, and watched his father’s inspection.

“It needs a washer,” his father said.

The boy nodded like he understood. Then his father looked at him, and pointed to the handle. Just give it an extra jiggle, he told him.

His father wasn’t a plumber, or good with his hands. His father was clumsy, and after arguing with his mother, the boy noticed his father’s hands were red.

“Go watch your shows,” she’d tell him, holding a hand to her cheek.

She was walking away from him, and the boy tried to see.

“It’s just a burn,” she said, and his mother closed the bathroom door behind her.

The boy could hear the water running in the sink, his mother crying. The toilet was running and he told his mother give it a jiggle.

His father watching a western, a bottle at his side, his armpits sweaty.

“Take a look at that,” his father said, pointing at the man dancing across the screen.  “Isn’t that neat?”

El Bailaran, a bird on his shoulder, the both of them singing.

He had been driving, the old lady not with him. She saw the bird first, its blue feathers tap tapping outside her window.

“Get that box,” she said, her cane pointing.

The man stood outside, the robin in his hands. It felt like the bird had inhaled its last breath. Its body was warm, and it hummed in his palms. The old lady told him about a house near the hospital, that the bird could be saved.

“Do something for once,” she huffed.

Sleeping in an oven, sleeping in his car. His car like an oven.

The man drove out to the desert, the box in the backseat, a blanket in the trunk. He was boiling. The man wrapped himself in the blanket. His eyes closed, sweat gathering at his forehead, dripping into his ears.

He thought about the bird, how it would smell, and the papers, and how the old lady was getting tired of all of that.

And then he went to sleep.

“You need to get rid of those papers,” the old lady told him. She was rocking in her recliner, and held a cane in her hands. “How’s that bird doing?” she asked.

The man brought the box to her feet and left it there.

He gathered his papers into stacks of bundles, and took them into the backyard. He set them on fire, the postcard, too. El Bailaran curled in from the edges, and snaked up into a trail of smoke.