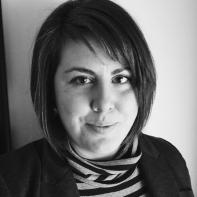 Christina Olson is the author of the collections Terminal Human Velocity and Before I Came Home Naked as well as the prose chapbook Rook & The M.E.: A Law & Order-Inspired Narrative. Her poetry and nonfiction has appeared in Arts & Letters, VQR, The Southern Review, Brevity, River Styx, Gulf Coast, Passages North, The Normal School, Hayden’s Ferry Review, and The Best Creative Nonfiction, Volume 3. She is the recipient of fellowships from the Vermont Studio Center and Willapa Bay AiR. Born in Cincinnati, raised in Buffalo, she teaches creative writing at Georgia Southern University.

LATE SPRING UP NORTH WITH TWO LINES FROM BISHOP

When the snow melts, the gloves
emerge. Always single. Once
in Minnesota, I found a nice mitten
while crossing the street—days
later, its other half. I took it as a sign,
that the north was the place for me.
I wore those mittens for years.
Stop calling it your tour of the Great
Lakes, someone says, you never lived
in Illinois, Indiana. As if the snow
thaws any differently in Gary. As
if the heart can tell the difference.
My mother says only boring people
get bored. The snow is boring.
The way it encroaches the curbs,
swallows the gloves, the dog turds,
the cigarette butts. In late spring,
it reverses and we find our old gloves
and we can’t remember who
we were when we wore them last.
In your next letter I wish you’d say
where you are going & what you
are doing. I am watching a woman
plucking an abandoned glove
by a single finger. I am watching
her drape it on the snowbank
as if someone will come back for it.
From Canada, a friend sends photos
of all the city gloves. Their fingers
are empty, reaching for hands
no longer there. The red one
looks like a cardinal, wings spread,
frozen in flight. It is late for something,
though I don’t know what.

On days I have therapy,
I clean the car in the morning,
like my doctor might flunk me
if there’s sand in the pedals.
I draw a self-portrait, label it
LIVING IS HARD. My mouth
is a slit. I learn geese have teeth
lining their tongues, like dinosaurs.
I wear my fat like it protects
me from my past. I give away
every book I’ve ever read. I learn
about shipwrecks and U-boats
and icecaps. The basil makes it
to July: one more living thing
to tend. The IRS makes a mistake
and says I owe money. I tuck
the letter in a drawer and drink.
I call my aunt to ask what a grown
up would do and she says, Well,
whatever you did do, because
you are a grown-up, which makes
me drink. I try on mantras
like bikinis—it is what it is.
Embrace the chaos. If I understood
string theory, I might be less anxious.
If the caldera under Yellowstone
grumbles awake. If California
sags into the ocean. If my bear
bell fails me. If all my bones break.
I welcome a disaster like the fall.