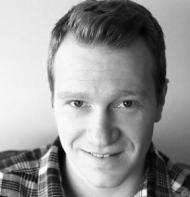 Ted Wesenberg grew up in Wisconsin on a Cadillac Ranch. He’s a former collegiate rower and Teach For America corps member. After teaching English in Asia, he began MA studies at Northwestern University. His work has appeared in magazines such as Midwestern Gothic, Sleet and Memoryhouse. He lives in Chicago, where he’s working on a novel.

We suffer because we are constantly losing things we never should have loved in the first place. I know because I grew up on a Cadillac ranch. That’s a country plot where old cars go to rust and die. You find them in the Georgia hills or backwaters of Wisconsin, where I’m from. Picture films such as Deliverance or Fargo—places where the killers hide corpses.

No murders on our ranch, to my knowledge, but still it’s a sight to behold. Ours is southwest of Oshkosh, at the junction of County Roads N and I. There’s a new barn and two-dozen jalopies sprouting like marsh weeds. It may look like a junkyard, but it’s all treasure to Terry, my dad.

On hot days, you’ll see Dad, aged 79, parade shirtless around the yard, admiring his beauties. To him an antique car is a statue. “Never mind the rust,” he loves to say, “that’s patina!”

Dad stores his favorites inside a barn beside lumber scraps and broken heirlooms. He most cherishes a Cadillac limousine with fins jutting out the back, two LaSalle coupes. A pink Continental with suicide doors—the same vintage as Kennedy’s assassination. The barn cannot accommodate them all, however. The others rest just so in the yard like some hillbilly sculpture garden. My poor mother. She tears at her grey perm, every time Dad brings home another antique.

While the ranch was always Dad’s pride, it embarrassed me. When the school bus let me off, kids snickered “white trash.” Once a friend’s mom dropped me off after a sleepover and remarked, “Oh, I never knew anyone actually lived here.” I bit my fist, longing for a normal home in the suburbs. I envied my peers who lived in tract homes on cul-de-sacs with squared hedges; houses in subdivisions named Fox Chase or Deer Haven.

However, our yard had not always been littered with junkers. Not long ago, Dad maintained and sold antique cars. At one time, he and my older brother worked on them side-by-side. But something within Dad changed. That change began with a man named David Dellis.

In addition to salvaging old cars, Dad attempted to salvage the lives of broken men: the alcoholic electrician, the out-of-work roofer; a carpenter behind on child support. Dad helped these men seek jobs or legal counsel. He drove them to or from rehab. or county jail.

David Dellis was another fixer-upper. He had dark hair and green eyes and looked like John Cougar Mellancamp, only with a weaker chin. They met in 1992, shortly after Dad returned from Desert Storm, where he’d counseled soldiers suffering PTSD. I had been kicking a soccer ball around our yard, when David’s purple BMW bumped down our driveway. Dad greeted him, and they got to talking.

They discussed mutual friends, Dad’s Iraq tour and favorite cars. David pointed to the black Mercedes, parked just outside the barn. “That one’s not for sale,” said Dad, “my wife loves that car.” Which wasn’t true, exactly, although it had dragged the strings of cans after their wedding.

But David had not come for cars—he needed wood. He smoked one cigarette after the other as he shared his dream of opening a halfway house for runaway teenagers. David said, “I’ve got the perfect place in Green Bay, but the roof leaks. And I need lumber for bedframes. Bedframes, I can build,” he said. He was good with his hands, good with a saw. If only he could afford the lumber.

To most people, it’s probably suspicious that David could afford a BMW, but not the wood for bedframes. But that’s the logic of an old car guy—cars above all else. It made perfect sense to Dad. I was seven then and sort of spellbound by the cigarette butts David flicked onto our lawn.

Dad told him, “You can have the lumber in the barn, but I want to be here when you load it.” Not that Dad wasn’t trusting, he just never made a habit of leaving his babies unprotected. David thanked him and said he’d return with a truck.

The following Saturday, September 5th, we’d gone to Grandpa’s birthday dinner. We’d just sat down to steak and kidney pie, when the phone rang and Grandma went to answer it. A moment later she returned looking pale. At the doorway she said, “Terry, it’s your neighbor. He says your barn’s burning.”

We raced home in time to see the barn sagging under the heat and the volunteer firemen unloading their truck. The giant hose pulsed like a muscle. I remember the heat against my chest and ashes fluttering from the sky.

I watched Dad watch it burn. The barn where had played as a boy; where he and his sisters had milked cows on frozen mornings; where his own father had showed him the milk routes and how to fix the delivery truck.

And the black Mercedes. Dad must have believed he could save it, parked as it was just outside the barn. He stalked the perimeter, seeking a point of entry, as if the fire had a weakness. But a heat wall surrounded the barn, extending far enough to singe leaves on Mr. Sweeney’s trees. A fireman, with blackened cheeks, trudged after him. He grabbed Dad’s arm. “Terry,” he warned, “don’t even try.”

Mr. Sweeney attempted to be supportive. “Don’t sweat it,” he said, “Insurance’ll recoup the financial loss, if not the cars themselves.”

Soon afterward, the Mercedes’s paint bubbled. Its front tires wheezed and burst, the head and taillights melted from their sockets.

After the dust settled, the fire inspector diagnosed the fire the cause of a “cigarette.” He began asking pointed questions. Twice, he asked Dad what brand of cigarettes he smoked. He said, “Helluva payday, isn’t it?”

But Dad didn’t smoke. And Mr. Sweeney confirmed that he’d seen two men load lumber into a truck not long before the fire started.

The inspector backed right down when he learned that Dad hadn’t kept the insurance current. “Only a millionaire,” Dad said afterward, “could afford to insure them all.”

It didn’t take long for authorities to finger David Dellis.

Charlie said. “Maybe he wins the lottery. Inherits money. He might, you never know. Take a judgment against him, he’d have to pay.”

“He’s got no luck,” Dad said. “He’s never going to win any lottery. He’s too dumb for good luck.”

Dad never prosecuted, such was his mercy for unwanted things and people. He lost twelve precious cars that day and didn’t see a cent. As for David Dellis? We wouldn’t hear from again until one evening four years later.

As I advanced through primary school, Dad turned from blonde to gray to white. He raised another barn and filled it with lumber and broken things in which only he saw value. He bought other fixer-uppers, but never again lifted a hood to tinker with an engine. He simply let the old cars rest on our lawn.

One evening, four years after the fire, I had returned home late for supper. The house smelled of baked pork chops, and loud shouts came from the TV-room. I thought I was in trouble for biking after dark. I tiptoed into the TV-room, where Dad was sitting on the edge of the couch, pointing at the television.

Mr. David Dellis had gained major notoriety. I saw his green eyes, set off by an orange jumpsuit. He’d been convicted for kidnapping, murder and dismemberment of a corpse.

In the heat of passion, David had broken his lover’s neck. Unsure what to do, he hacked the body up and drove it to a farm in Door County. The farmers caught him attempting to stuff limbs into their garbage. He threatened them with a lead pipe before stealing their truck. He led local authorities on a manhunt. They apprehended him a week later.

Dad pushed his plate away and sat awhile, absorbing the report. It looked like he might cry, and at age ten I didn’t feel ready to see that. I went to my room, believing that justice had been served. Had I been wiser, I would have stayed to comfort him. Because with David’s life ruined, Dad’s mercy on him meant nothing. David’s dreams, the halfway house, Dad’s memories and all the lost everything had come to nothing.

An autopsy revealed that the corpse belonged to a fifteen-year-old boy, Michael, a runaway who had sought shelter with David. When Michael had attempted to leave, they quarreled. Michael attacked David. David put him in a chokehold that snuffed the life out of him. We suffer in life because we are always losing what we should never have loved in the first place.

‹ "Death Comes for the Poet," by Sue William Silverman up "Big Bully," by Vic Sizemore ›