"End of the World," by Melissa Goodrich 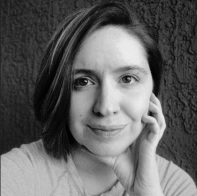 Melissa Goodrich is a writer and educator based in Tucson, Arizona. She received her BA in Creative Writing from Susquehanna University and her MFA in Fiction from the University of Arizona. Her work has appeared in American Short Fiction, Artful Dodge, The Kenyon Review Online, Passages North, PANK, Word Riot, Gigantic Sequins, and others. She is the author of the fiction collection Daughters of Monsters and the poetry chapbook IF YOU WHAT.

End of the World

We visit the end of the world for our honeymoon, and it’s better than the pictures. The pictures make you think it’s like the edge of a plate, this thin, shatterable perimeter. But it’s much more like cliffs. Steepled sheets of earth. A staircase the ocean trips down and off into the open abyss.

It is a rumbling near the edge, and then this long, dropping quiet.

Back in Maryland, there’s a snow bomb. I’ve never heard of such a thing before. I imagine an atomic blizzard. A sphere huge and white as a moon, the slow, silent descent of it. Blast-crashing into ice-shards and flakes. Roofs caved in with the weight of it.

I imagine my mother and father and their tiny, sweatered Chester, who is old and flimsy as a handbag, his fur thin and springy, the little socks they wrestle him into so he won’t slide across the kitchen floor and smack headlong into the fridge.

We’re staying in a hotel shaped like a chandelier.

We’re in one of the hanging teardrop shards, encased in frosted glass.

There’s things to do at The End of the World.

Bungee-snorkeling with an elastic tether.

I run my hands over my husband’s back and ask him what we should do first, but what he wants to do is go back up into the chandelier and take a shower.

I say, You are such a coward. And he gives me this wounded look, and I say, Aw, Steve, I was just joking, Steve, come on, Steve, I’m sorry, but he knows (and I know) I’ve kind of gone too far.

We walk back up to the hotel elevator and I stand kind of behind him, and say, I don’t know why I said that. That was mean of me to say.

He smile-frowns. The elevator sails upward. Our stomachs flip. Which does not exactly make me feel better.

I breathe in through my nose like I am inhaling a whole field of wildflowers.

When he gets in the shower, I sneak out and rent a jet ski. The sun is pooled into its golden hour, making the water red-purple and magic. I inch into my wetsuit. Strap on my helmet and life vest. I flex. Speed off to see the world at its end.

Back in Maryland, Chester is being carried around in my father’s arms as my mother and father wander plumpish though the snow. They are wearing like 8 coats and hats and scarves in the photos they send me. They’ve been snow-bombed for a week and have finally been dug out by the city plowers and are exploring their neighborhood like it’s a new planet. Chester in a little red parka.

All three of them little locomotives puffing steam.

I’m skidding across the ocean. Feel the waves kick up around me. The tides at the end of the world are warm. Have a strong, tugging undercurrent.

The buoys let you know where the waterfall will suck you in. There are also little signs at the End of the World.

My husband comes out of the shower all steamed and buff and husbandy.

I am zooming around the water, flirting with the buoys, circling back.

I get a text saying my little niece, who my folks sometimes watch, has cut her bangs down to her forehead on their watch. They send me a photo of the damage, and she looks good. Devil-eyed. Proud.

They say she gave Chester a haircut too, with no follow-up pics.

I ask my husband how he feels if we were to go home and get a few chickens and he says pretty good.

He’s rubbing his watch with a microfiber cloth.

How bout an emu?

How bout an indoor-outdoor pig?

My husband finds me playing with the word on my lips like I’m trying to decode something. Maybe I am. We’re lying in bed in our tier of chandelier in new PJs softer than melted butter. Why can’t I just call you Steve? I ask. You’re my Steve. Hi guys. This is my Steve, Steve.  I say, to a pretend audience.

He rolls over and I run my hands over the outline of his back until he sleeps.

In the middle of the night, a rainstorm rumbles up. I can feel the rain run in rivulets down the glass as if it were my own skin. I blink my eyes open against the blackness, and the only light I see is the sparkle of the city behind me. And in front of me, the deep plunge off the ends of the earth.

I slip off the bed and onto the floor and start rummaging through my luggage. I like the sounds of those words. Luggage. Rummage. When it thunders in the distance I shiver. My nipples ping forward. I feel my hands wrap around something sharp, a small pair of sewing scissors which I managed to smuggle onto the plane with me and my three enormous balls of yarn.

One of these yarn-balls pops out from the luggage and rolls across the floor, leaving a trail.

I stand up and kick it across the room. I put the tiny scissors on my ring finger as far down as it will go, to rest on the first knuckle.

And do you take, they said during the ceremony.

The rain patters and patters a militia of hooves. I lean over sleeping Steven and kiss him on the forehead. He smiles in his sleep, the dope. It makes me want to cut off a lock of his hair, snap it in a locket. But I keep my scissors in my hand. Well, on my hand. I wear these scissors as a symbol of this bond, I think, or no – I wear these scissors as a symbol of violence and smallness, of precision and boundaries. I pick them up and cut off a snip of my own hair instead. The shiing of the snipping feels good. I had a friend who knitted her husband’s beard into a hat, and I used to think that was weird. This lock is too small to knit.

And knitting hair is weird.

I’m cross-legged on the floor and I snip off a longer lock, a knittable one. I think about how maybe I’ll make Chester a pooch hat or something. I think about how stupid it is to cut your own hair for no reason in the dark. I think about the word ugly. Ugly. Ugly. You’re ugly, I think. I absorb the rainsounds in my bones. Part of me is bored, part of me wants to cry. Just thinking ‘cry’ starts it.  Oh boy, Eleanor, I think, and my cheek’s wet. The sky rumbles. I rumble. I run my thumb across my forehead and tell myself, Shh. Shh, Eleanor. I tell myself it’s okay. I tell myself, You’re married! Someone loves you! Maybe you’ll make Chester a hat or something!

And let myself and the carpet drench.

‹ "The Witnesses," by Michael Beeman up "To Walk Chalk," by Melissa Olson-Petrie ›