"A Castle in the Clouds," by Tara Zambrano 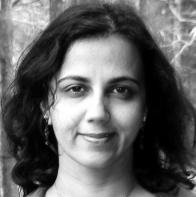 Tara Isabel Zambrano lives in Texas. Her work has appeared or is forthcoming in Tin House Online, Slice, The Minnesota Review, Yemassee and other journals. She is an electrical engineer by profession and reads prose for The Common.

A Castle in the Clouds

The sun was dull like most days when a layer of fog wrapped around the chimney like a dhoti Krishna’s father used to wear. Krishna was playing with a toy truck on the kitchen floor and in between got up to blow his nose when he saw the fog descending. “Look Ma," he said pointing to the kitchen window. She was preparing tarka for daal, a pinch of chilli powder between her fingertips, her face anxious and long. She rushed outside and stared at the half clad chimney, holding the pallu of her saree close to her mouth. In the next ten minutes, neighbors filtered into their yard. What could it be? Some suggested not looking at it. Others called it a manifestation of Indra, the rain god.

The next morning when Krishna kicked his ball, it kissed the cloud and came back with glitter on its surface. The second time the ball touched the cloud and disappeared. When he looked up it seemed as if the fog had formed a face: an elongated chin and a high forehead, two dark holes gaping at him. It was unlike anything he’d seen before: sparkling lines crisscrossing under its fabric, buzzing, running a world inside it.

“Ma, do you think it’s Baba?” Krishna asked that night. She sniffled and placed her hand on his forehead. “It’s time to sleep." From his window he could see the white threads of the fog, dancing in the dark breeze. Before he closed his eyes he thought he heard a faint bouncing of a ball.

For the next few days, hot air gusted through the tree tops and the sky lit up with jagged lines. The fog extended lower, surrounding the windows as if peeping inside. Krishna watched people come into his house. Some suggested feeding the cows and ants, donate gold and money in the name of the Sun God. His mother listened, occasionally looking at their family portrait, her eyes wet with grief. Krishna wandered outside looking for his ball, stealing a glance or two at his home: wrapped in muslin air like a castle in clouds. It was his Baba, definitely him, the way the fog bulged in the center and stayed thin at its ends. Why wouldn’t Ma see it?

It was late at night when the front door creaked. Krishna pulled the blanket tighter. The fog had blotted out most of his room; Ma’s body was threaded in long, white yarns of air. He feared if he touched her she’d dissolve in the cloud.

Ma smiled in her sleep as the fog got under her arms as if cuddling her. “Ramesh, is that you?” she whispered. Krishna hoped she was right. He shifted towards her and touched the milky air. The cloud extended and brought him close. Inside, he felt as if he heard a river, chirping of birds, Ma telling him to be careful and Baba assuring her not to worry. There was hope in his voice. How Ma and Baba looked young and complete, how Baba waved and Krishna turned into a man Baba once was, his firm hand supporting an older Ma. How moonlight filtered in and a new world opened up. How everything became whole again.

Krishna opened his eyes. He was covered in a sparkling dust, each speck a mirror. Next to him was the ball he lost. The room was dark and smelled of Baba’s aftershave. Ma was asleep. He knew tomorrow she’d cry her angry, silent tears and he’d miss the warmth in Baba’s hand pressed against his cheek at night. The world would continue to turn and the cloud would be around even if someday he could no longer see it.

‹ "Children," by Rosaleen Bertolino up "iris," by Thomas Gresham ›