A Poem by Sara Quinn Rivara 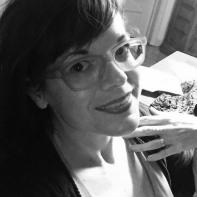 a collective noun of quails and ladies

Big-breasted girls, pale, we lived on Oreos and ginger
ale. The North Branch of the Chicago River hightailed it

toward the Big Lake. Everything disappeared, was swallowed up.
Trash, dead leaves, girls. We pissed in the shallow creek,

instead of eating we’d run, drink diet Coke, break. I broke
my deaf sister’s fingers with our bedroom door. She couldn’t speak

for weeks. I hit another sister on the head with a hairbrush, blood spattered
the floor. I was punished; she has a scar. Another sister I flung against

the armoire. One broke my rib, another cut the crotches from my panties
and we sliced our pictures from the yearbook, scratched out our eyes

with a tack. Boone’s Farm and acetone soaked our clothes.
We’ll burn if you get too close. The female body is a wet mess.

By seventeen, we’d learned to sugar our tongues, shape our fingers
around yes. We pressed our soft bodies against our narrow beds.

It would have been handy, learning to speak. But nobody told us that, then.

‹ A Poem by Ryan Dzelzkalns up A Poem by Todd Dillard ›