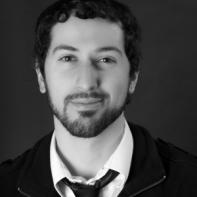 Brandon Amico lives in North Carolina. He is the recipient of a Regional Artist Grant from the North Carolina Arts Council and the winner of Southern Humanities Review’s Hoepfner Literary Award for Poetry. His poems have appeared or are forthcoming in The Awl, Booth, The Cincinnati Review, Kenyon Review, New Ohio Review, and Verse Daily, among other publications.

You might like: Morbid curiosity. See also: Consciousness, choice,
psychedelic drugs. If you like food, you might also enjoy air, rely
on water, you’re up to six times more likely to have sex before
you turn 80. If you were born in the 90s you’re probably alone,
Did You Know you can sell your cultivated loneliness at 2¢/word?
There’s always somebody looking for People Like You, versatile
in your utility, ubiquitous in your individualism. Joke: What did one
snowflake say to the other snowflake? Answer: [Say your name here.]

If you like the tone of this poem, thank your right supramarginal gyrus
and Google—though not necessarily in that order. If you like
the sound of your own voice, create Content. If you’re unique
in one regard, statistically you’re probably not in another
though the research is still out on statistics (here’s a hot take on statistics,
and a thermal take against that hot take). Did You Know the odds
of winning the lottery a second time are the same as the first?
Thank your ventromedial prefrontal cortex and indulge.
Related Fractions: 1/2, 8/16, 4/8, 260/520. Joke: What did
the numerator say to the denominator? Answer: I see myself in you.

The heart that fed was user error. Hearts were not designed
to do this, but to store grain
and buoy their chassis, to pump                        and thunder
and moan against the frame. Wherefore the rooms

tacked on, guest spaces spooled together
with something like a moat,                  who taught us
to love others in our own space? The heavy linework

of the late artist is attributed to an indulgent heart,
a pet at home                            sprawling out on the hearth.
Psychologists wearing muted suits, furrowed ties, prodding a diagram
on the wall and clearing their throats

like the one-TWO of a magazine clip entering its place of worship.
Televangelists close their eyes, buzz, tongues
lolling, fattening in their own charged juices.
Some choose to consume the heart before it snaps

off the bough and forces them into action, to pick it up and rub it
on their shirtsleeve as if to confirm ripeness

organic disposal of evidence. Replication of that hollow
echoing out from cupped hands:                   stadiums, mausoleums,
all that is built to satisfy a future need. We erect our new world

Picture a body: its rooms and storage, picture frames piled in a hall closet.

The body: tired, and tired metaphor of home—just a new coat

of paint, a new liver, occupant, receptacle of time and alcohol.

His body above my body, my body bordering their leg, her shoulder, the grain

door, tongue knocking, knocking, the feet housed in that which knocks,

steps, the carpet unrolling like a tongue, knocking. I’m sorry for the distance kept

marked with irony—though I’d like to blame the language, opaque chests

of idioms. In the first known use of language, someone lied. Else

it would’ve been enough just to point at the thing itself: rock, tree, lover, friend.

‹ Four Poems by Audra Puchalski up A Poem by Dana Alsamsam ›