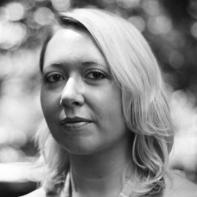 Anne Champion is the author of The Good Girl is Always a Ghost (Black Lawrence Press, 2018), Reluctant Mistress (Gold Wake Press, 2013), and The Dark Length Home (Noctuary Press, 2017). Her poems have appeared in Verse Daily, Prairie Schooner, Salamander, Crab Orchard Review, Epiphany Magazine, The Pinch, The Greensboro Review, New South, and elsewhere. She was an Academy of American Poet’s Prize recipient, a Barbara Deming Memorial grant recipient, a Best of the Net winner, and a Pushcart Prize nominee. She currently teaches writing and literature in Boston, MA.

FALSE IDOLS
On the toppling of a confederate statue in Durham, NC, 2017

If you make your temple a den of thieves,
it’s only a matter of time before it collapses

under a furious heel. Even a man
whose gray coat is cast in sheet metal isn’t immortal—

his pedestal will shift atop the festering
wounds it rests on. The dead possess us

all eventually, unmask our heroes
as traitors, hiss in our ears that reparations

are owed. Do not be ungenerous
with your sacrifices. Let them bleed out fully:

light makes its way into every laceration in spite of it.
Make a lasso, fling it around the false idol’s

neck like a noose, and force it to kneel.
Let the truth bash it like a drum that signals

the approach of Armageddon, but don’t let it trick you:
the rapture has already turned us inside out,

gutted us and forced us to sing for it,
and, somehow, we do, as defiant as a God

driving greed from his temple with a whip.
Everywhere, God carves off chunks

of his body and places it on the tongues
of anyone hungry to believe, even those tongues

still in bondage, even those tongues that are bondage.
Every fire is not infernal, every river

is not baptismal, but every flag is a shroud.
The living must breathe despite the fragrance of rot

threaded into our clothes by the dead, resisting
and persisting in this commingling of decay and love.

I GET PNEUMONIA AND IGNORE POLITICS FOR A MONTH

"Darling, all night
have been flickering, off, on, off, on.
The sheets grow heavy as a lecher’s kiss.”

I’m telling you, this weight is not new.
Ever since you said you wanted truths,
it’s pressed on you like the devil crawling into your bed,

like the stones on the ribs of an accused witch.
Truth is abyss: you don’t fall into it
or stare into it, you heave it, learning

that the world doesn’t heal no matter
how much you love it, that your indignation
doesn’t resurrect the innocent, that you, alone, dull

no blades of injustice. Coughing into the kitchen sink,
you remember how you wanted, no,
you believed, your voice to be thunderclap,

how you dragged your righteousness so beautifully,
a wedding train, but anyone
that gets on their knees and claws at the roots

of any planted horror will find themselves adorned
in their own shadow. Who sees you now
that you’ve sweated your silhouette onto your sheets,

now that every breath feels like shards of glass?
Your suffering matters as little as any human suffering
matters, but fevered visions purify—you’re a tick

burrowing into the bulbous flesh of a greedy gut,
you spread your afflictions like a plague,
and every mediocre white man collapses

onto the spine of another mediocre white man
like a string of dominoes. You’ve lost your voice,
but it’s no matter—no one has ever really heard you

saying no. You dream of an equality in which
you sever every demagogue’s tongue
and demand he explain himself again and again.